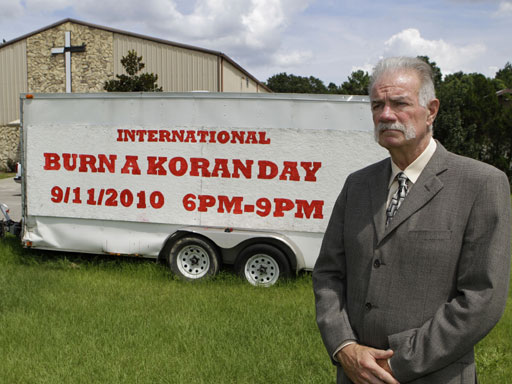 CBS News confirms Secretary of Defense Robert Gates called Rev. Terry Jones Thursday afternoon, urging the pastor not to go through with a planned Koran burning. Jones announced today that he has called off the event. (Watch his announcement at left.)

"The Secretary expressed his grave concern that going forward would put the lives of our forces at risk, especially in Iraq and Afghanistan, and urged him not to proceed with it. That was the extent of it," Pentagon spokesman Geoff Morrell said.

Morrell characterized it as "a very brief conversation" that occurred some time between 4 and 4:30 p.m. ET, before the press conference Jones held this afternoon.

Jones announced at the press conference that he would not burn copies of the Muslim holy book on the ninth anniversary of September 11, citing an agreement with Imam Feisal Abdul Rauf to move the location of the Islamic Center near ground zero.

Following Jones' press conference, Imam Feisal put out the following statement: "I am glad that Pastor Jones has decided not to burn any Qurans. However, I have not spoken to Pastor Jones or Imam Musry. I am surprised by their announcement."