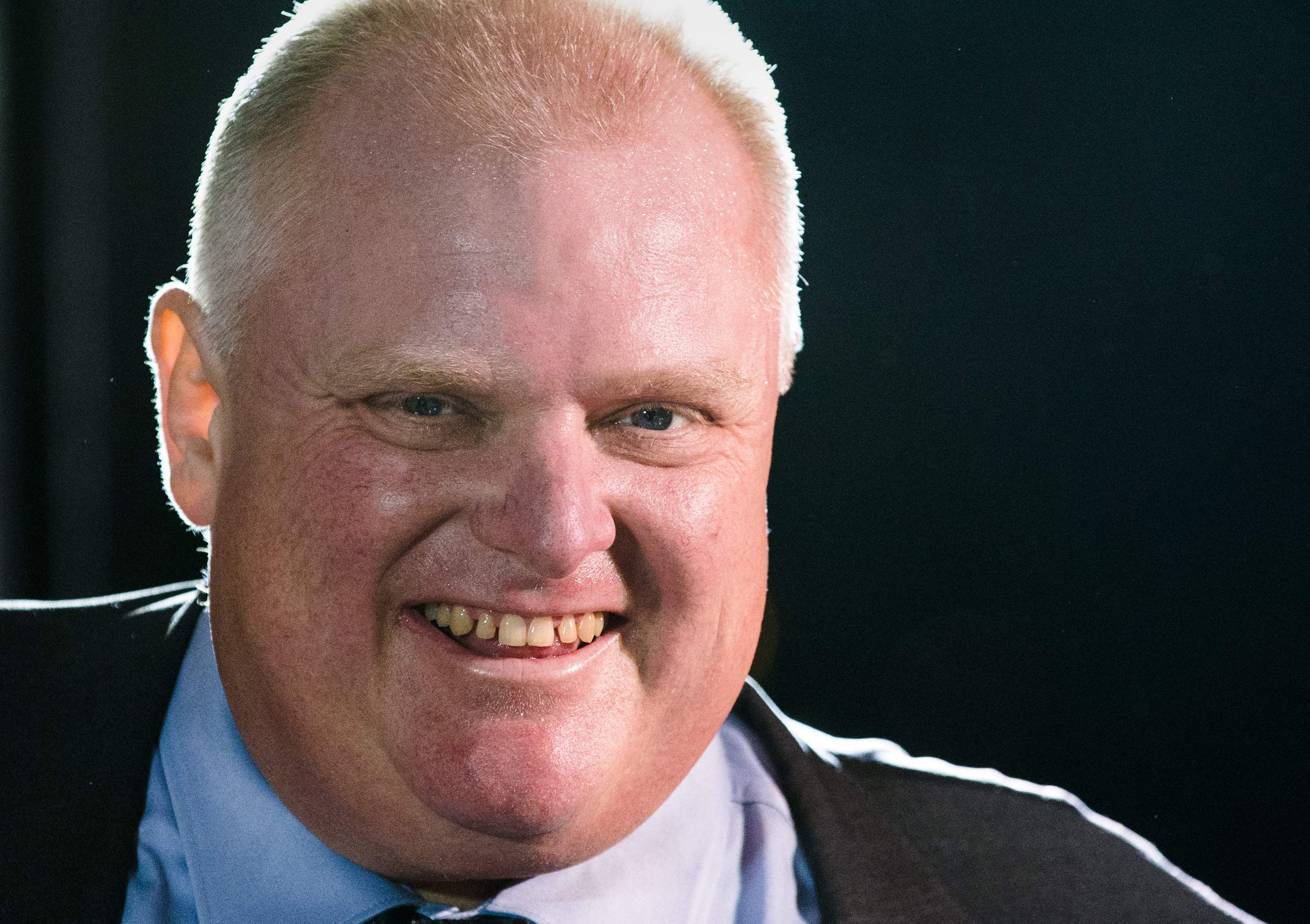 TORONTO -- Rob Ford, the pugnacious, populist former mayor of Toronto whose career crashed in a drug-driven, obscenity-laced debacle, died Tuesday after fighting cancer, his family said. He was 46.

Ford rode into office on a backlash against urban elites. He cast an image sharply at odds with Canada's reputation for sedate, unpretentious politics. His tenure as mayor of the country's largest city was marred by revelations about his drinking problems and illegal drug use. He was repeatedly videotaped and photographed while intoxicated in public.

Nevertheless, after losing that office he was later elected by a landslide to a City Council seat, a job he held until his death.

One after another, his statements and actions became nightly fodder for TV comedians and an embarrassment to many of the suburbanites he championed. Among the more notable:

- Knocking over a 63-year-old female city councilor while rushing to the defense of his brother, Councilor Doug Ford, who was insulting spectators in the council chamber.

- Threatening "murder" in a profane, incoherent rant captured by video.

- Swearing and slurring his words, calling the police chief a derogatory name and trying to imitate a Jamaican accent in a different video.

But his popularity continued. Even after a scandal broke about Ford's use of crack cocaine, hundreds of people lined up for bobblehead dolls of the mayor, signed by Ford himself. Ford spent countless hours taking pictures with residents eager to be photographed with an international celebrity.

As he sought a second term as mayor in 2014, Ford was diagnosed with a rare cancer just two months before the election date. Malignant liposarcoma in his abdomen forced him to do what months of scandals could not - drop his bid for re-election. He underwent a series of aggressive chemotherapy treatments.

"With heavy hearts and profound sadness, the Ford family announces the passing of their beloved son, brother, husband, and father, Councillor Rob Ford, earlier today at the age of 46," a statement from his family said Tuesday. "A dedicated man of the people, Councillor Ford spent his life serving the citizens of Toronto."

Current Toronto Mayor John Tory said in a statement that "the city is reeling with this news."

"He was a man who spoke his mind and who ran for office because of the deeply felt convictions that he had," Tory said. "I know there are many who were affected by his gregarious nature and approach to public service."

When Ford was elected mayor in 2010, his bluster was widely known. A plurality of voters backed him, eager to shake things up at a City Hall they viewed as elitist and wasteful. Ford's voter base resided mainly in the outer suburbs, a result of the Conservative provincial government's decision to force liberal Toronto to merge with five of its neighboring municipalities in 1998, creating a mega-city that now has 2.7 million residents.

Ford appealed to conservative-leaning, working-class suburban residents with his populist, common-man touch and with promises to slash spending, cut taxes and end what he called "the war on the car." He first won as mayor by promising to "stop the gravy train" of government spending.

His supporters got perhaps more turmoil than they expected.

The international spotlight fell on Ford in May 2013, when Toronto Star and the U.S. website Gawker reported the existence of a video that appeared to show the mayor inhaling from a crack pipe. He denied the existence of the video but later backtracked when police said they had obtained it. Although he became the subject of a police investigation, Ford was never charged with a crime.

"Yes, I have smoked crack cocaine," Ford told reporters after he stepped off an elevator. "But, no, do I? Am I addict? No. Have I tried it? Probably in one of my drunken stupors, probably approximately about a year ago."

According to police interviews, members of Ford's staff accused the mayor of frequently drinking, driving while intoxicated and making sexual advances toward a female staffer.

Ford drew gasps when he used crude language on live television to deny telling a staffer he wanted to have oral sex. The father of two school-age children said he was "happily married" and that he enjoys enough oral sex at home.

Disgusted city councilors turned their backs on Ford in a council meeting that day. Jon Stewart played the oral sex remark clip that night on the "Daily Show" and yelled, "What? What?! What?! WHAT!? WHAT!?"

Despite immense pressure, Ford refused to resign. The City Council stripped Ford of most of his powers but lacked the authority to force him out of office because he wasn't convicted of a crime.

Ford announced he was entering rehab in April 2014 after newspaper reports detailed three different nights in which the mayor was extremely intoxicated. One report cited a video that appeared to show him again smoking a crack pipe.

Although his cancer ultimately forced him to drop his re-election bid, Ford opted to seek his old City Council seat. It was in the same suburban district where he launched his political career and where his everyman style and conservative fiscal policies first gained a faithful following that became known as Ford Nation. He won his old seat in a landslide. His brother Doug replaced him on the ballot for mayor but lost.

The youngest of four children, Rob Ford grew up in a palatial home in the Toronto suburb of Etobicoke. He dropped out of university after a year and worked at the family business.

Ford mayor met his wife, Renata, in high school, and they were married in 2000. One of Renata Ford's few forays into the media spotlight came in 2008 after a widely reported domestic dispute with her husband. Rob Ford was charged with assault and threatening death, but prosecutors withdrew the charges, citing inconsistencies in Renata Ford's statements.

Ford is survived by his wife and two children, Stephanie and Doug.

Canadian politicians took to Twitter on Tuesday to send their condolences: