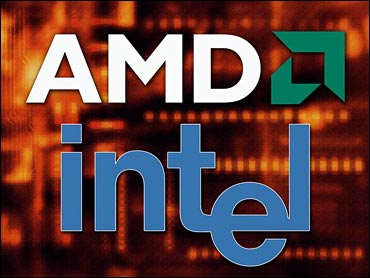 The suit, filed late Monday in U.S. District Court in Delaware, alleges Intel has bullied 38 companies, including large-scale computer-makers, wholesale distributors and retailers, to secure a monopoly in the highly competitive x86 microprocessor market. In one case, AMD likened Intel to a cocaine dealer who gets customers hooked on its financial incentives.

The microprocessors run the Microsoft Windows, Solaris and Linux operating systems. Santa Clara-based Intel's current market share of x86 microprocessors is about 80 percent of worldwide sales by unit volume and 90 percent by revenue.

"Everywhere in the world, customers deserve freedom of choice and the benefits of innovation - and these are being stolen away in the microprocessor market," said Hector Ruiz, president and chief executive officer of Sunnyvale-based AMD.

He added that "people from Osaka to Frankfurt to Chicago pay the price in cash every day for Intel's monopoly abuses."

Intel spokesman Tom Beermann declined to comment until after the company has reviewed the lawsuit.

Rick Whittington, a Caris & Co. analyst, said the legal action has been expected and breaks no new ground.

"The timing of this suit, in our view, is Sales and Marketing 101," he said in a research note. "Get the attention of the customer as market demand heats up and you have sizable supply coming down the pike. Put the competitor, to whatever extent possible, on the ropes and force them to adopt less aggressive sales tactics, if even marginal."

AMD is taking the action now since the company has seen some success in gaining a technological edge over Intel after years of trying to catch up. Still, sustained profitability has remained elusive, with AMD posting a $17.4 million loss in the first quarter.

"We're successful and business is strong," said Tom McCoy, AMD's chief administrative officer. "No one can say at this time AMD is simply a whiny competitor unable to compete in the marketplace and therefore resorting to the courts."

The 48-page lawsuit alleges a broad pattern of bullying by Intel.

The lawsuit accuses Intel of having forced major customers such as Dell Inc., Sony Corp., Toshiba Corp., Gateway Inc. and Hitachi Ltd. into exclusive deals in return for cash payments and other deals.

On Tuesday, the PC makers either did not return calls or declined to comment on the allegations.

"We wouldn't comment on a dispute between two other companies or discuss relationships we have with our suppliers," said Mike Maher, a Dell spokesman.

In Japan, AMD claims it was making inroads with 22 percent market share when Intel paid Sony "multimillion dollar sums, disguised as discounts and promotional support" in exchange for an exclusive contract. It mirrored a similar, earlier deal with Toshiba, AMD claims.

"Toshiba thereupon dropped AMD," AMD claims. "Its executives agreed that Intel's financial inducements amounted to 'cocaine,' but said they were hooked because re-engaging with AMD would jeopardize Intel market development funds estimated to be worth $25 (million)-$30 million per quarter."

In March, Japan's anti-monopoly watchdog, the Fair Trade Commission, issued a warning to Intel, saying the company was curbing competition in the microprocessor chip market by pressuring Japanese clients to buy its chips.

Intel denied the allegations but said at the time that the changes outlined in the agency's proposed cease-and-desist order would not affect its ability to compete in the Japanese marketplace.

But the actions weren't limited to Japan, AMD said.

When AMD tried to convince Hewlett-Packard Co. to use AMD chips in its commercial desktop line, the company demanded $25 million to compensate for Intel's expected retaliation. AMD also said it has had problems reviving its relationship with Gateway Inc.

"According to Gateway executives, their company has paid a high price for even limited AMD dealings," the suit reads. "They claim that Intel has beaten them into 'guacamole' in retaliation."

AMD also claims Intel went so far as to disrupt the launch of its Opteron server chip in April 2003 by pressuring computer makers to withdraw from the event.

The European Commission has said it is pursuing an investigation against Intel. The U.S. Fair Trade Commission also has investigated Intel's practices but said in 2000 that it was closing the case and taking no action against the world's largest chipmaker.