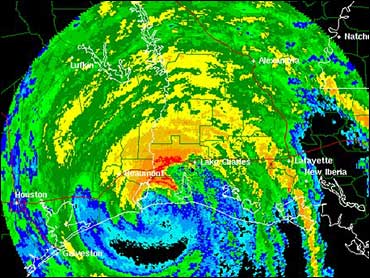 Hurricane Rita plowed into the Gulf Coast early Saturday, lashing Texas and Louisiana with driving rain, threatening to flood low-lying regions and knocking power out to at least three-quarters of a million people as transformers exploded in the pre-dawn sky.

Rita made landfall at 3:30 a.m. EDT as a Category 3 storm just east of Sabine Pass, on the Texas-Louisiana line, bringing a 20-foot storm surge and up to 25 inches of rain, the National Hurricane Center said.

It now estimates Rita is a Category 2 and that it will continue to weaken as it passes over land.

Residents called police early Saturday to report roofs being ripped off and downed trees. Rescuers were forced to wait until the winds outside died down to safe levels.

Utility officials say nearly three-quarters of a million homes and businesses in Texas alone have lost electricity due to Hurricane Rita.

"We can't even get out to check yet," said Sgt. Wendell Carroll of Louisiana's Calcasieu Parish Sheriff's Office. "All we can hear is the wind a howling."

Mom dies weeks after son takes her on the trip of a lifetime
CBS News has planned expanded coverage of Hurricane Rita this weekend. For details, click here.

Emergency workers in southwest Louisiana said they expected to find death and devastation when the storm's strongest horizontal rain and wind squalls pass.

Rescuers plan to head to homes of people who didn't flee, but later called 911 seeking help as the storm pounded southern Louisiana and flooded coastal areas.

The storm spread worries it would dump nearly 2 feet of rain on flood-prone parts of Texas and Louisiana, spurring tornadoes as it churned northwest at 12 mph with winds that topped 120 mph.

From his ninth-floor hotel room in Beaumont, Texas, CBS News correspondent Randall Pinkston reports that the

building rocked in the fierce winds (video)
as the eye approached.

"It is akin to the sensation of being on a moving train. What's disorienting is that a hotel room isn't supposed to move," Pinkston says.

Rita steamed toward refinery towns along the Texas-Louisiana coast with 120 mph winds Friday, creating havoc even before it arrived: Levee breaks caused new flooding in New Orleans, and as many as 24 people were killed when a bus carrying nursing-home evacuees caught fire in a traffic jam.

Officials estimated at least 90 percent of surrounding Jefferson County residents had heeded warnings that a storm surge could submerge swaths of the low-lying county, including the seawall-and-levee-protected city of Port Arthur, near Sabine Pass.

More than 450,000 CenterPoint Energy customers in Texas were without power in the company's service area, which stretches from Galveston into Houston north to Humble, company spokeswoman Patricia Frank said. Entergy spokesman David Caplan said about 55,000 of its Texas customers in the storm-affected area were without electricity.

CBS News correspondent Trish Regan reports that nearly 1,000 people planned to ride out the storm in a make-shift shelter at Sam Houston State University, in Huntsville, Texas. Regan reports that other families who have run out of gas are

forced to sleep in their cars tonight on Interstate 45 (video).

CBS News correspondent John Roberts reports that Houston, America's fourth largest city has turned into a ghost town, as well as Port Arthur, Texas, where the

storm surge is expected to top the flood wall (video).
Rita's heaviest rains, up to 3 to 4 inches an hour, fell in Lake Charles, La., National Weather Service meteorologist Patrick Omundson said. The town had 8 inches of rain more than two hours before the storm's landfall. Near the coastal town of Cameron, the weather service recorded a wind gust of 112 mph as the storm's center approached.

The storm brought chaos even far from its path. Rain in New Orleans re-ruptured levees that were broken by Hurricane Katrina, bringing renewed flooding to that city. South of Dallas, a bus of Rita evacuees caught fire in gridlocked traffic, killing as many as 24 nursing home residents who thought they were getting out of harm's way.

CBS News correspondent John Blackstone reports that the vehicle was rocked by explosions and engulfed in flames.

In Galveston, about 100 miles away from the storm's eye, a fire erupted in the historic Strand district late Friday. Wind-whipped flames leapt across three buildings. City manager Steve LeBlanc said the blaze could have been caused by downed power lines.

"It was like a war zone, shooting fire across the street," Fire Chief Michael Varela said Saturday.

As the storm raged, the torches of oil refineries could still be seen burning in the distance from downtown Beaumont. Officials worried about the storm's threat to those facilities and chemical plants strung along the Texas and Louisiana coast.

The facilities represent a quarter of the nation's oil refining capacity and business analysts said damage from Rita could send gas prices as high as $4 an hour. Environmentalists warned of the risk of a toxic spill.

As Rita approached, its powerful rains and winds sent water gushing over one of New Orleans' patched levees and into the already-devastated Lower Ninth Ward and parts of neighboring St. Bernard Parish. The water rose to waist level.

"Our worst fears came true," said Maj. Barry Guidry, a National Guardsman on duty in the Ninth Ward. Another levee could not protect homes in the Gentilly neighborhood, now under 6 to 8 inches of water.

In the days before the storm's arrival, hundreds of thousands of residents of Texas and Louisiana fled their homes in a mass exodus of 2.8 million people that produced gridlock and heartbreak.

Grocery shelves were emptied, gas stations ran out of fuel and motorists had to push their cars to the side of highways after idling for hours in stuck traffic and running out of gas.

Nearly 1,300 patients were airlifted out of an airport near Beaumont in a rush Thursday night and Friday morning, but only after the county's top official made a panicked call to Sen. Kay Bailey Hutchinson for help.

"We had patients throwing up. It was very ugly," said Jefferson County Judge Carl Griffith, who blamed delays on the Transportation Security Administration, which insisted every wheelchair-bound passenger be checked with a metal-detector.

Steve Rinard, a meteorologist in Lake Charles, said he could not keep count of the tornado warnings across southern Louisiana. "They were just popping up like firecrackers," he said.

In Tyler, about 100 miles southeast of Dallas, officials said their shelters were full and refugees who continued to arrive from the south were being directed elsewhere. About 3,700 people were housed in 23 packed county shelters.

Katrina's death toll in Louisiana rose to 841 Friday, pushing the body count to at least 1,079 across the Gulf Coast. But the company under contract to collect the bodies in the New Orleans area suspended operations until at least Sunday because of the approaching storm.