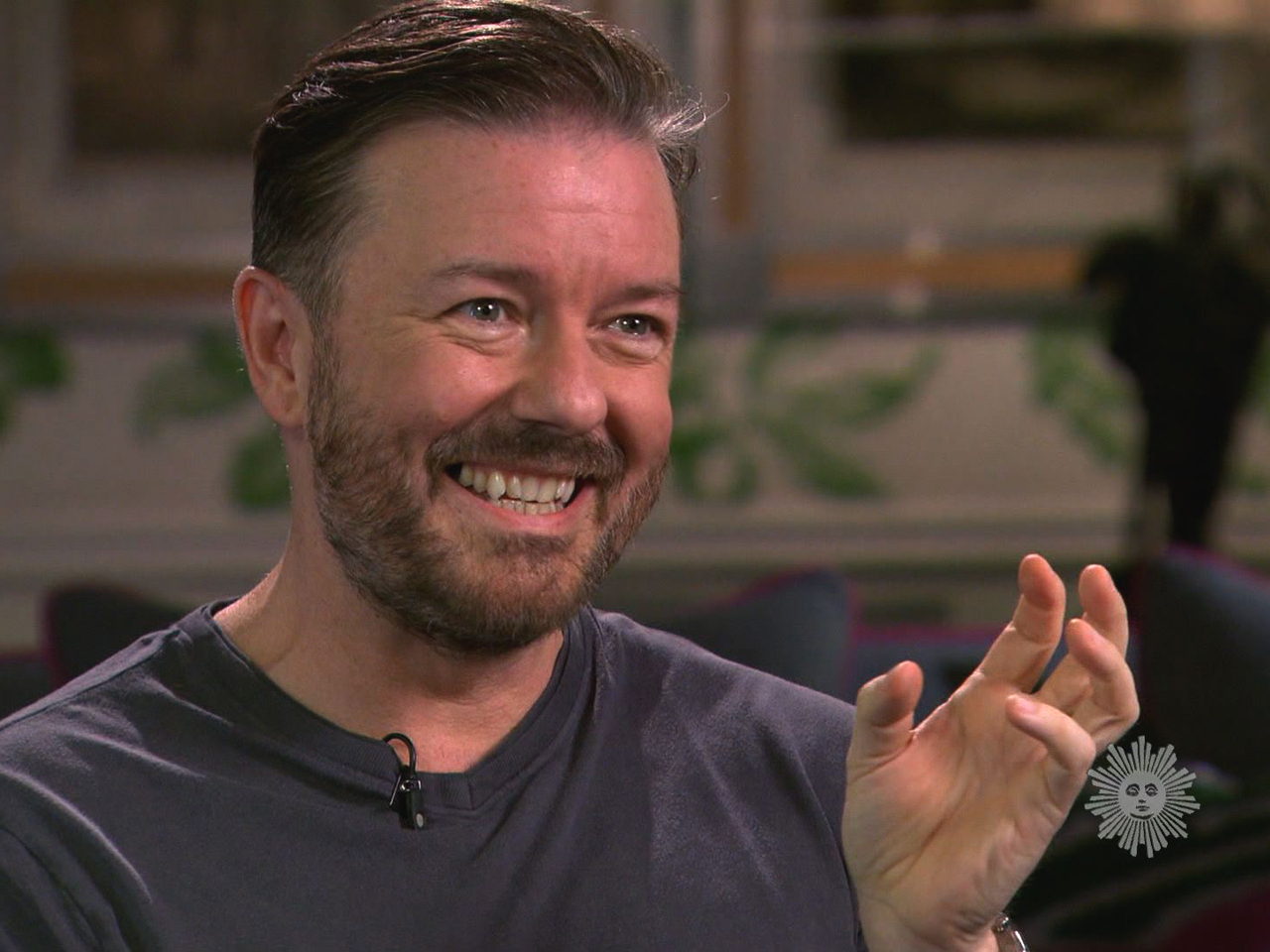 (CBS News) British comic Ricky Gervais gets laughs by saying things that go just that little bit too far. Mark Phillips recently pinned Gervais down for some Questions and Answers:

"I shouldn't be this famous, or rich, with the stuff I do," he laughed. "No, I should be a fringe comedian that a few people have heard of that isn't allowed on telly, yeah."

One of the first things you learn when you talk to Ricky Gervais is not to take everything he says seriously.

Although, for a funny guy -- one of the most popular mainstream comics of his generation -- he can get pretty serious.

"I think that's because if you do what you do and you're uncompromised, you don't listen to focus groups and it's not by committee, something's going to come out that wasn't there before."

What came out for Gervais was an obscure little British sitcom that conquered the world - "The Office."

But it turned out the inept boss who only wanted to be loved, but who everybody loved to ridicule, was a character with international appeal.

The show was exported to about 90 countries, and re-made in eight, including Steve Carell's version that ran for nine seasons in the United States.

Phillips asked, "Nobody's surprised that 'The Office' worked in the British context, just because of the ideas we have about British humor and that kind of thing. But are you surprised that it's played that well everywhere, including in the States?"

"Yes. I'm surprised it was as successful as it was in England, full stop. Just because, you know, it was challenging to people," Gervais said. "No stars. No one knew who I was. My first thing I'd written, directed. No laugh track."

In the American version, David Brent became Michael Scott. The scripts -- at least in the beginning -- were almost identical.

"I don't think that Michael Scott has such a dark side to David Brent," said Gervais. "There is a hint of breakdown in David Brent."

"Because the audience wouldn't stand for it?" asked Phillips.

"Because Americans are more positive than Brits, I'd say, in general. And that's another myth that goes around Britain: that Americans don't get sarcasm, or irony. Total myth. Totally exists. What they mean is, Americans don't use it every second of the day, you know? Two Brits meet and it's the first one to get out a sarcastic comment: 'Oh. Yeah, they're good shoes.' You know, we can't resist it, particularly two blokes. You know, two blokes, two British blokes could not meet and go, 'Your hair looks good.' That couldn't happen."

"Yeah. They couldn't say it and mean it," Gervais laughed. "Yeah. It'd be weird."

Not all of Gervais' transitions to American popular culture have been as smooth as "The Office."

"It's going to be a night of partying and heavy drinking. Or as Charlie Sheen calls it, breakfast."

"On a serious note, just looking at all the faces reminds me of all the great work that's been done this year . . . by cosmetic surgeons."

His act was deemed so offensive, he was asked to come back and do it two more times.

"It was mild ribbing of some of the most famous, loved people in the world. It wasn't a room full of wounded soldiers, you know? I made some jokes."

"If anybody can take it, they should?" asked Phillips.

"Well, and I think they did. I don't think those people went home crying about some little, you know, upstart Brit making fun of their film. Really?

He says his stubbornness comes from being a late bloomer. Success didn't come until his late 30s, by which time he and his long-time partner, the author Jane Fallon, decided not to have children because, he says, he was afraid they would turn out like him.

Even his musical tribute to the unloved English town of Slough, where "The Office" is set (the British equivalent of the U.S. "Office" 's Scranton, Pa., is barbed . . . and has become a YouTube hit.

The station's just got a new floor,
And the motorway runs by your door.
And you know just where you're heading.
It's equidistant 'tween London and Reading.
Oh, Slough,
My kind of town.
I don't know how
Anyone could put you down.

"Why should you be prouder of being born in London or New York or Paris than you are of Slough or Scranton? There's no reason," Gervais said. "There's no reason to be proud of anywhere you were born. You had no choice!

The success of "The Office" brought Gervais some mainstream movie roles -- supporting Ben Stiller in "Night at the Museum," and the lead in "The Invention of Lying," which he wrote and co-directed.

But his day job continues to be cult comedies.

"Extras," about a bit-part player who finally makes it by selling out his principles, played well, but never had the success of "The Office."

And now another odd-ball, even controversial Gervais comedy has crossed the Atlantic. This one's about an old age-home worker, called "Derek."

When it ran in Britain, critics wondered whether Gervais had crossed a line -- even for him.

"He's a fictional character, and he's based on people that I've met are like Derek."

"I deal in taboo subjects for a reason," Gervais continued. "I want to investigate the audience's and my discomfort around those things."

Success came to Gervais relatively late in a show biz life. He was 40 when "The Office" broke through. Now he's got the track record to be able to do what he likes, and to learn lessons from his most famous character.

"He wasn't that bad," Gervais said of David Brent. "He tried to please everyone all the time, and he ended up pleasing no one. Which is a nice metaphor for being a comedian, I think!"

To view the trailer for Gervais' series "Derek," click on the video playter below.