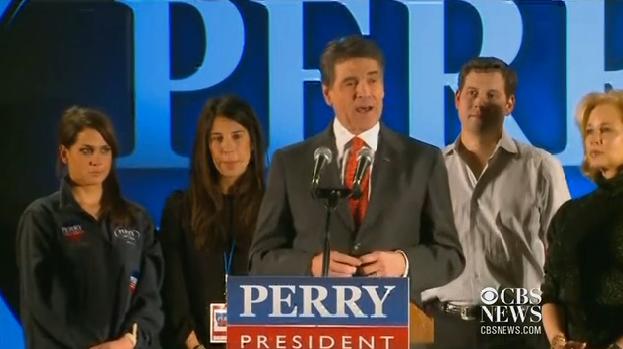 After a disappointing fifth-place finish in Tuesday's Iowa caucuses, Texas Governor Rick Perry said he is going home to Texas to assess "whether there is a path forward for myself in this race."

"With the voters' decision tonight in Iowa, I've decided to return to Texas, assess the results of tonight's caucus, determine whether there is a path forward for myself in this race," Perry told supporters at the end of the night.

The candidate, once considered a frontrunner in the race for the GOP nomination, earned just 10 percent on Tuesday's contest with more than 90 percent of the votes counted.

Why the race was so close
Romney remains unloved - but it's his race to lose
Why Michele Bachmann didn't drop out
It's a tie! So Santorum wins

"But I wanna tell you, there has been no greater joy in my life than to be able to share with the people of Iowa and of this country that there is a model to take this country forward and it is in the great state of Texas," he added.

The candidate is still slated to participate in two upcoming Republican debates, but has canceled three days of events in South Carolina. Spokesman Ray Sullivan said the Perry campaign would make no announcements about the future until Thursday at the earliest.