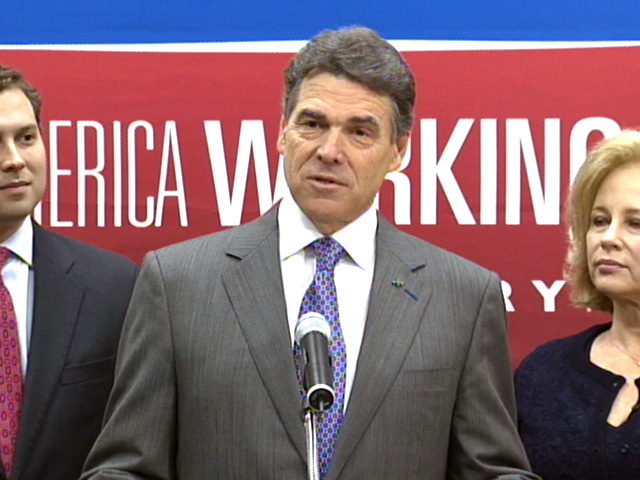 "I have come to the conclusion that there is no viable path forward for me in the 2012 campaign," Perry said at a press conference in North Charleston, South Carolina. "I know when it's time to make a strategic retreat."

Perry said the 2012 campaign has "never been about the candidates" but about defeating President Obama and replacing him "with a conservative leader who will bring about real change." He called Gingrich "a conservative visionary who can transform our country."

Gingrich appears to be gaining momentum in South Carolina, and Perry's endorsement could give the former speaker a critical boost just two days ahead of the Palmetto state primary. A senior campaign aide said Gingrich's staff had begun reaching out to Perry's campaign "aggressively" in recent days. Gingrich himself had suggested on the campaign trail that it would be helpful for him if Perry were to drop out.

Still, Gingrich's campaign has its hurdles. The candidate has come under scrutiny for his multiple marriages and past infidelity, and now his second wife, Marianne Gingrich, is saying the GOP presidential candidate wanted an "open marriage."

In a December debate, Perry said that marital fidelity is "important"to the presidential race, adding that "he's always kind of been of the opinion that if you cheat on your wife, you'll cheat on your business partner."

Today, Perry noted that he and Gingrich have "had our differences... and Newt is not perfect, but who among us is?"

"The fact is, there is forgiveness for those who seek God, and I believe in the power of redemption," he continued. "I have no question Newt has the heart of a conservative reformer."

In a statement Thursday, Gingrich said he was "humbled and honored" to have Perry's support, calling him "a leader for the cause of conservatism." He asked Perry's supporters to consider his record, saying, "South Carolinians have a chance this Saturday to nominate a bold Reagan conservative who will offer a dramatic contrast with President Obama this fall in the general election."

At an event in Beaufort, South Carolina on Thursday, Gingrich said he spoke to Perry that morning and asked him to head up a "10th Amendment enforcement project, reaching out to every governor in the country in both parties," as well as other elected leaders.

Gingrich said the project would result in a strong party platform plank on the 10th Amendment, which protects states' rights, as well as legislation on the issue.

"We can then pass that legislation no later than the end of the first quarter of 2013 to return power to the citizens, to communities, and the states and get it out of Washington, D.C.," he said.

Gingrich said Perry agreed to take on the project.

Perry jumped into the presidential race last August to much fanfare, immediately surging to the top of the polls. But after multiple poor debate performances and campaign flubs, his campaign quickly began to flounder.

Perry finished in a disappointing fifth place in the Iowa caucuses and finished sixth in the New Hampshire primary after opting to skip campaigning in the Granite state. Even though he ceded New Hampshire to focus on the more conservative state of South Carolina, polls have shown him stuck in the single digits and in last place there. Perry was also performing poorly nationally, according to the latestCBS News/ New York Times poll released Wednesday.

With the South Carolina primary as possibly the last opportunity to significantly slow Mitt Romney's momentum, conservatives have been anxious for Perry to drop out so the GOP could coalesce around another candidate. Conservative radio host Laura Ingraham and conservative blogger Erick Erickson of the site RedState.com both said on Wednesday that Perry should drop out.

Some conservatives, including a coalition of more than 100 social conservatives, have thrown their support behind Rick Santorum, who virtually tied Romney in the Iowa caucuses.

Others, meanwhile, see Newt Gingrich as the most viable alternative to defeat Romney. While Romney just two weeks ago held a 20-point lead in South Carolina, new polls show that Gingrich has made significant inroads there. In a new NBC/Marist poll conducted Monday and Tuesday, Gingrich earned 24 percent support to Romney's 34 percent

In a statement, Romney commended Perry for running "a campaign based upon love of country and conservative principles."