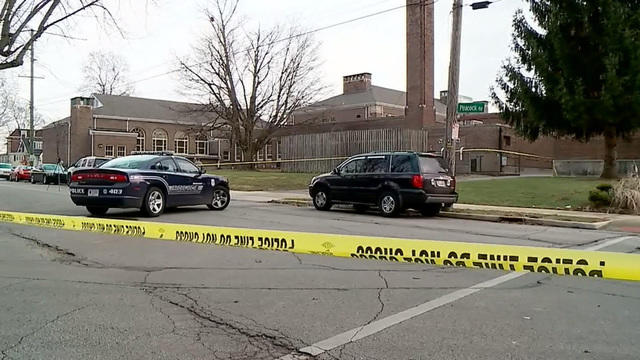 Police credit a phone tip for helping thwart a potential mass shooting at an Indiana middle school. The tip sent police racing to Dennis Intermediate School in Richmond Thursday where officers exchanged gunfire with a teenager before he killed himself.

Peggy Lewis, who lives across the street from the middle school, said she spoke with the suspect's father after the shooting.

"He just said his son took all of his guns this morning and said if he didn't take him…he was going to kill him, too," Lewis told CBS News correspondent Jim Axelrod.

Because he was a juvenile, investigators are not releasing the shooter's name or the identity of the 911 caller who tipped off police. Investigators are working to figure out why the 14-year-old targeted the school.

Even though police said the suspect was not a student at the school at the time of the incident, several people we spoke to here said he had been bullied and that his father had told them his son had threatened revenge.

Law enforcement received a 911 tip about the suspect and alerted school officials to lock down the campus. Arriving officers found the armed teen outside. When they confronted him, he shot his way into that school door and the police raced in right after him – even as he shot at them before killing himself.

Students said they hid with their teachers behind locked classroom doors.

"You could literally hear the fear in like the principal's voice when she said, 'lockdown, lockdown,'" one student said.

Earlier this year, the FBI admitted it failed to follow up on a tip it got 40 days before February's shooting at Marjory Stoneman Douglas High School in Parkland, Florida where 17 students and staff died.

Indiana police credit the tip they received with saving lives.