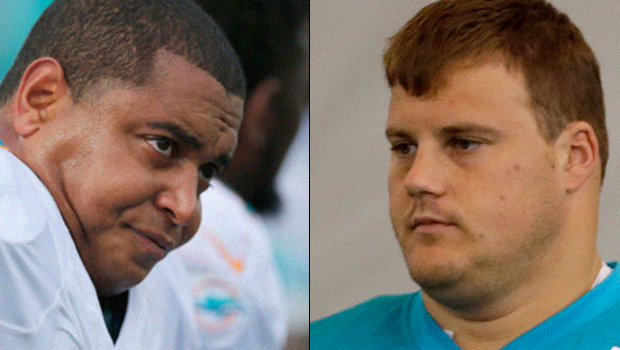 Both CBSSports.com's Jason La Canfora and the Associated Press confirmed the unsettling content of the exchange via anonymous sources because the Dolphins and NFL haven't disclosed the nature of the misconduct that led to Incognito's suspension.

The 319-pound Incognito, a ninth-year pro, is white. The 312-pound Martin, who is in his second NFL season, is biracial. Incognitio allegedly called Marin a "half-n*****," reports La Canfora.

La Confora says he has seen texts Incognito sent to Martin; one of them referred to Martin with a racial slur.

"Threats of 'I'm gonna get your mother, I'm going to find your mother.' and 'I'm going to kill you'" said La Canfora. "That is above and beyond what is accepted anywhere."

Martin, a tackle, remained absent from practice Monday one week after he suddenly left the team. Also missing was Incognito, suspended indefinitely late Sunday by Miami for his treatment of Martin.

The team and NFL continued their investigation into allegations by Martin's representatives that he was bullied. The NFL Players Association also planned to look into the matter.

At a press conference Monday afternoon, Dolphins head coach Joe Philbin said he had no indication of unsafe behavior in his locker room prior to the incident.

"If the review shows that this is not a safe atmosphere...I will make sure that it is," Philbin said.

Recent rumblings of locker-room dissension have also included complaints by young players that they're pressured to pay more than their share when team members socialize together.

Before being suspended, Incognito posted several tweets saying he wanted his name cleared.

Agents for the two players didn't respond Monday to requests for comment. Martin is with his family in Los Angeles for counseling.

Incognito has long had a reputation as one of the NFL's dirtiest players. During his first four years, he led the league in penalties for unnecessary roughness, and the St. Louis Rams got fed up with his undisciplined play and released him during the 2009 season.

"There's certain people out there who are just punks, and he wants to be that kind of guy," former Seahawks and Lions defensive end Lawrence Jackson said Monday. "But because he's a lineman, he gets away with a lot of stuff that people don't see. ... Incognito is way worse than anybody I ever played against."

However, there have been fewer such complaints since Incognito joined the Dolphins in 2010.

At Nebraska, Incognito's career was cut short when he was suspended in 2004 before his junior season following a locker room altercation with a teammate. He also ran into problems with the law while with the Cornhuskers, and they said he repeatedly violated team rules.

Martin protected Andrew Luck's blind side at Stanford before joining Miami as a second-round draft pick in 2012. He has been a starter since the beginning of his rookie season, but has struggled while dividing his time between left and right tackle.

For the first six games this year, Incognito and Martin were the two players protecting Ryan Tannehill's blind side, which may help explain his league-high 35 sacks.