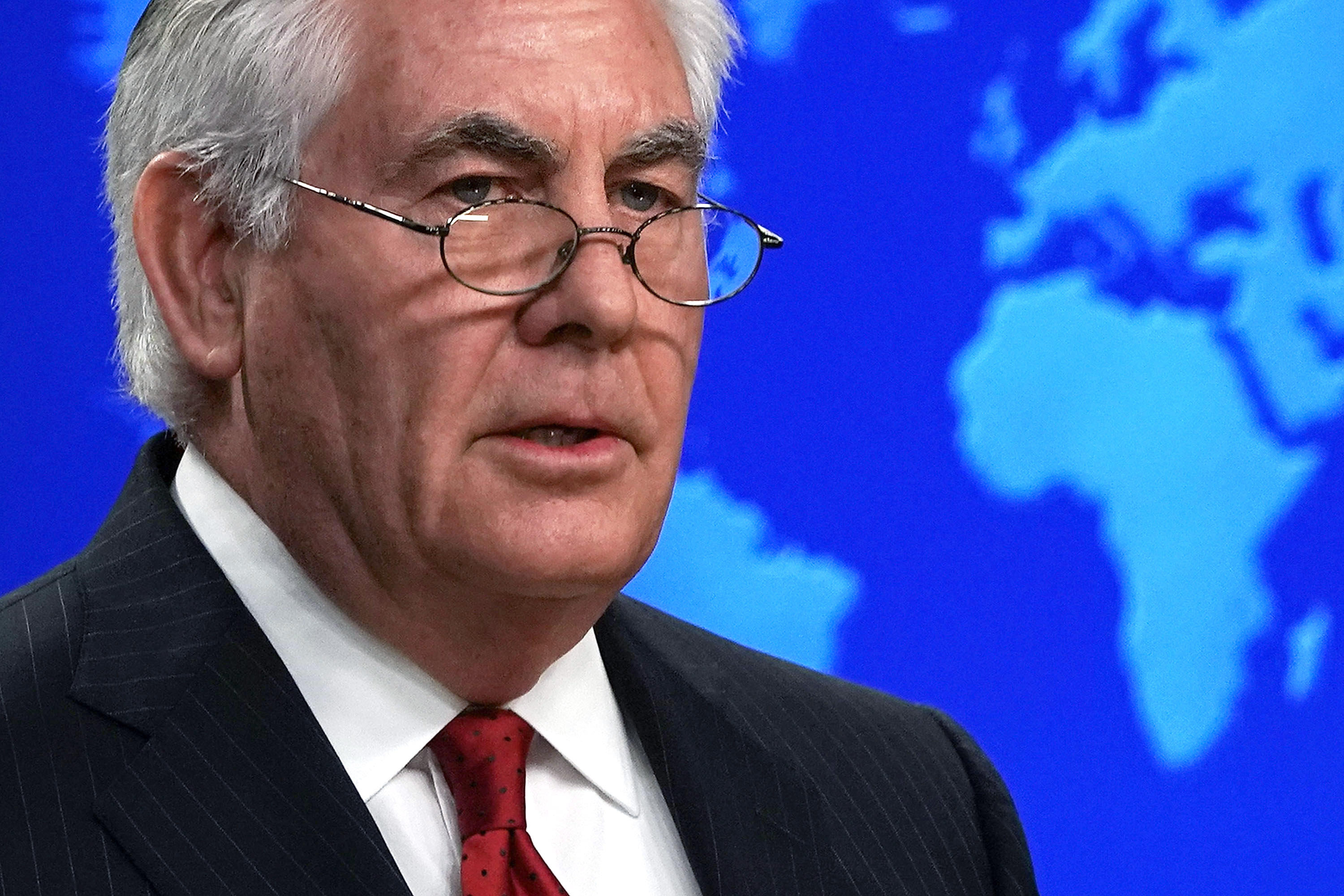 Even before Secretary of State Rex Tillerson walked into the department's Foggy Bottom headquarters, he was in trouble.

Shortly after President Trump took office, 1,000 State Department employees signed a "dissent cable" in protest his ban on travel from a number of Muslim-majority countries. The decision had been ushered into law as an executive order even before Tillerson had been confirmed in February 2017. The White House spokesperson at the time, Sean Spicer, said State Department employees should "either get with the program or they can go."

The situation pitted the White House against the State Department and the State Department against Tillerson, who was planning to retire as Exxon-Mobile's CEO when Mr. Trump tapped him to become America's top diplomat. Tillerson had no formal diplomatic experience, and aware of the discord in the department he was about to lead, he immediately tried to mend fences.

On his first day at Foggy Bottom, Tillerson sheepishly introduced himself as "the new guy" in a speech to department staff. He knew that many of the people he was addressing had worked for Mr. Trump's election opponent, Hillary Clinton, when she was Secretary of State.

"Each of us is entitled to the expression of our political beliefs, but we cannot let our personal convictions overwhelm our ability to work as one team," Tillerson said at the time.

But team building was of secondary importance. First he had to endear himself to Mr. Trump, with whom he did not have a close relationship. Over the course of his tenure, Tillerson, who abides by the old western philosophy "my word is my bond," spent a lot of his energy courting the president. It ended up being a go-nowhere effort that ended when Tillerson was sacked on Tuesday.

"He had to make Trump believe he was on his team, that he wasn't from the State Department where they thought everyone hated Trump," explained a State official. To that end, he had lunch with Mr. Trump weekly, talked with him on the phone most days, and tried to put in as much face-time as possible with the new president.

Yet they never really developed a rapport. The two men had marked differences in style, and policy differences became steadily more apparent. And then there was Jared Kushner: the president's top adviser and son-in-law, who quickly developed his own diplomatic profile.

Like Tillerson, Kushner lacked a diplomatic background. Yet he quickly became the White House's point man on international issues ranging from the Middle East peace process to relations with Mexico and China. Friction was inevitable. Tillerson told Kushner the Chinese were duping him, souring their relationship further.

Tillerson, an engineer by training, was meticulous, a quality that ran counter to Mr. Trump's speedy entrepreneurial approach to most issues. They could never see eye-to-eye on perhaps the most pressing diplomatic concern, which was North Korea's nuclear program. Mr. Trump even embarrassed Tillerson on Twitter when he told him to "stop wasting his time" seeking a negotiated solution to the impasse -- at the time Tillerson was in the region.

And Tillerson never completely followed Mr. Trump's lead. A week before he was fired, Tillerson told reporters that negotiations with North Korea were a long ways off. Later that same day Trump, accepted a meeting with North Korean leader Kim Jong Un. When that surprise announcement came, Tillerson was sure to air a dose of skepticism, saying that the speed of Kim Jong Un's change in posture "came as a little bit of a surprise." And Tillerson also warned of a victory lap: the regime had not reached out to confirm the meeting.

Mr. Trump and Tillerson had different methods to approaching almost every diplomatic challenge, which led to a series of policy disagreements between the two. They sparred over quitting the Paris Climate agreement, how to handle the Qatar blockade, how much to initially press for diplomacy with North Korea, and on Trump's instinct to ditch the Iran Nuclear Deal altogether.

"He and I have differences of views on things like [the Iran Deal] and how we should use it," Tillerson said last summer. "But, I think, if we're not having those differences, I'm not sure I'm serving him."

Yet those initial differences on the Iran deal helped spur reporting of Tillerson's departure. Those rumors – perpetuated by Tillerson's opponents at the White House – remained in the Washington wind, with differing levels of intensity, until Tillerson's final day.

Tillerson spent his time fighting off the rumors of his impending departure. He called them "ridiculous" and tried to massage tensions with Mr. Trump. "I'm not going anywhere," Tillerson said in response to a question from CBS News in July 2017, when he had only been on the job for 6 months.

Meanwhile, State Department employees grew increasingly unhappy. By the time he left, Tillerson still hadn't filled seven of the top nine positions at the department. And the feeling of being sidelined, as foreign policy decisions were largely made within the walls of the White House, mounted among diplomats.

Foreign leaders and diplomats called the White House when they needed to get something done. In light of the administration's proposal to cut 30 percent of the State Department's budget, the former oil giant's plans to restructure the department, which he said were designed to make it more efficient, started to seem like an excuse to lay off experienced diplomats.

Tillerson's was not without some accomplishments. In early 2017, he was able to convince the Trump administration to remove Iraq from the travel ban list in return for Iraq agreeing to open diplomatic conversation with the Saudis. But he did not want to call attention to incremental successes. At one point, he said the State Department hadn't put any "wins on the board." A former aide explained that, for Tillerson, a real win would only be something monumental, like getting North Korea to denuclearize.

As a result of his reluctance to talk up his smaller victories coupled with fears of infuriating the White House, Tillerson primarily got attention through his attempts to save his relationship with Trump. When reports broke over the summer that Tillerson had called Mr. Trump a "moron," there was a last-minute news conference at the State Department. Tillerson called Trump "smart," but never denied that he had made the comments. Shortly after that, Mr. Trump told reporters he would like Tillerson to be a "little tougher."

Their relationship would never really improve, leading Mr. Trump to unceremoniously fire Tillerson on Twitter. In his outgoing remarks that afternoon, Tillerson thanked State Department personnel and Department of Defense counterparts, but notably he never mentioned the Mr. Trump by name.

"I'll now return to private life as a private citizen, as a proud American, proud of the opportunity I've had to serve my country," Tillerson said. After 14 tumultuous months on the job, he left without taking questions from reporters.