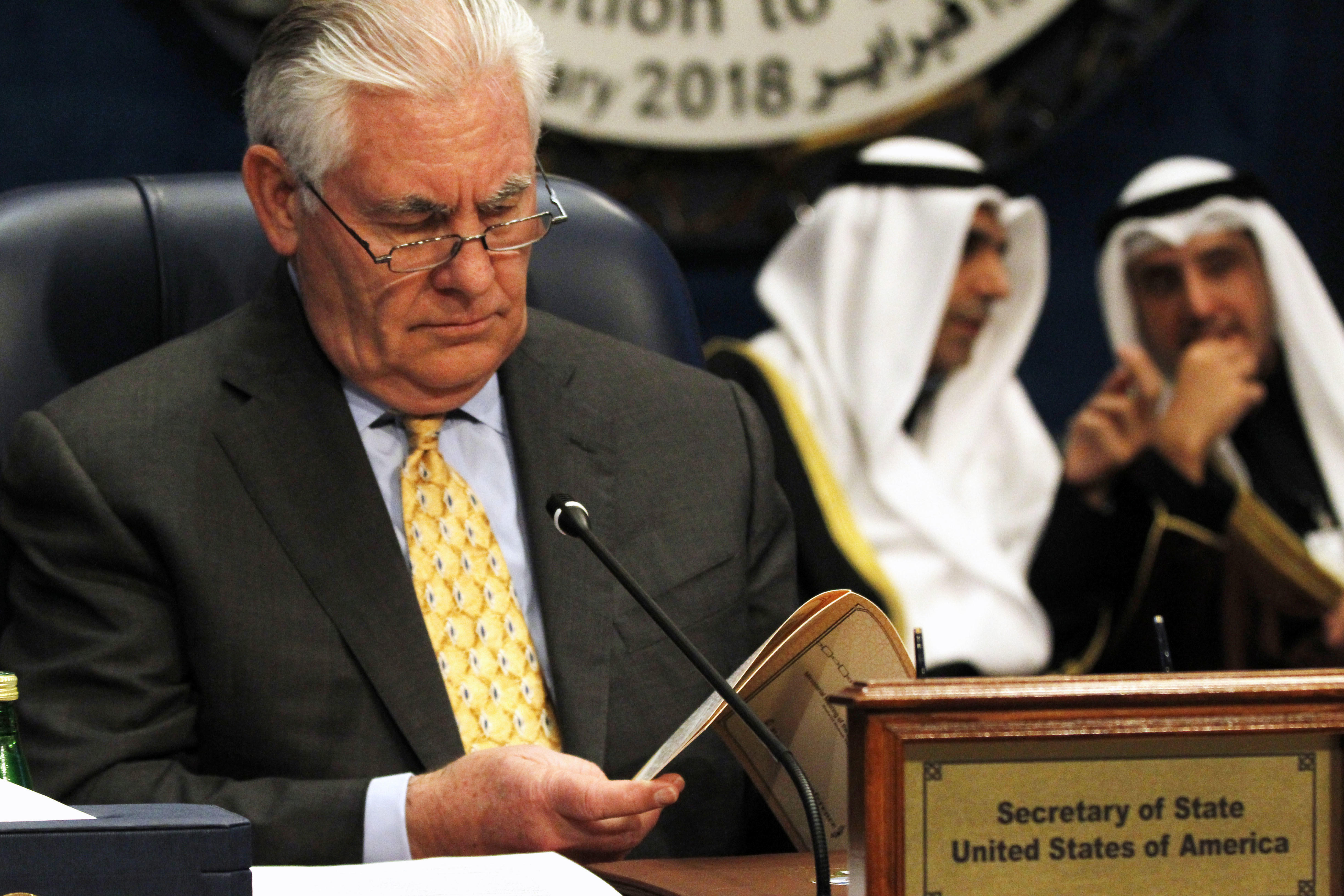 KUWAIT CITY -- The Trump administration, increasingly concerned that the 74-strong coalition it cobbled together to destroy the Islamic State of Iraq and Syria (ISIS) is losing sight of the prime objective, pressed its partners on Tuesday to refocus their efforts, overcome rivalries and concentrate on the task at hand: the eradication from Iraq and Syria of the extremist group.

The alarm U.S. Secretary of State Rex Tillerson sounded at a coalition gathering in Kuwait came with the fight at a critical moment and the mission shifting from offensive military operations to stabilization.

Distractions are adding up, such as Turkey's fighting with U.S.-backed Kurdish rebels in Syria and intensifying anti-American rhetoric from Turkish leaders. Meanwhile, renewed spillover from Syria's civil war, including hostilities between non-coalition actors - Iran, its proxies in Syria, and Israel - risk creating a new conflict in an already crowded battle space.

"The end of major combat operations does not mean we have achieved the enduring defeat of ISIS," Tillerson told the meeting in Kuwait City, using an alternative acronym for the Islamic State group.

"ISIS remains a serious threat to the stability of the region, our homelands and other parts of the globe," he said. "Without continued attention and support from coalition members, we risk the return of extremist groups like ISIS in liberated areas of Iraq and Syria and their spread to new locations."

Tillerson announced that the United States would contribute an additional $200 million "to further support critical stabilization and early recovery initiatives in liberated areas of Syria," bringing Washington's total contribution to humanitarian efforts to nearly $7.9 billion since the conflict in Syria began in 2011.

It was not immediately clear how that money would be distributed. Tillerson reaffirmed that the U.S. "would maintain a conditions-based and ISIS-focused military presence in Syria" that would in part continue to train local security forces.

U.S. officials said the thrust of Tillerson's message was that "eyes have to be on the prize" and anything that hinders ISIS' defeat will impair broader objectives such as a political transition in Syria that ultimately leads to an end of the war and blunts Iranian behavior throughout the region.

"It's complicated enough as it is. Let's not make it more so," one official said in describing the administration's view.

Rising tensions between the U.S. and NATO ally Turkey over Turkish military operations against the Syrian Kurds are a primary concern and Tillerson will end his five-nation swing through the region in Ankara on Friday, after stops in Jordan and Lebanon.

Turkish President Recep Tayyip Erdogan ramped up his criticism of the U.S. on Tuesday, reacting angrily to reports that the Trump administration has proposed a boost in funding to Syrian Kurdish militia in its proposed budget for the next fiscal year. Erdogan also took aim at comments from U.S. commanders in northern Syria, who said any attack on them or Kurdish partners would be met with force.

"To those who say 'if they hit us, we will respond with force,' it is clear that they have never experienced the Ottoman slap," Erdogan said.

Ankara is riled over Washington's support for the Syrian Kurdish People's Protection Units, or YPG - the top U.S. ally in the fight against ISIS. Turkey considers the YPG a "terrorist" group linked to Kurdish insurgents fighting within Turkey's own borders.

At the meeting In Kuwait, Tillerson made a point of noting concerns about the situation and urged "all parties to remain focused on defeating ISIS, deescalating and resolving the Syrian conflict and protecting innocent civilians."

U.S. officials allowed that Tillerson's talks in Ankara would be difficult.

But, they maintained -- as Tillerson did again on Tuesday -- that the U.S. appreciates Turkey's legitimate security concerns. However, the officials also stressed that addressing those should not come at the expense of the anti-ISIS mission. If the Syrian Kurds feel threatened, the officials said, they will move their forces away from ISIS fronts, prolonging the fight.

In addition to keeping the fight against ISIS in Iraq and Syria on the front burner, Tuesday's meetings in Kuwait will also focus on preventing the spread into Europe and elsewhere of retreating ISIS fighters.

Tillerson said the U.S. supports a new blueprint for boosting intelligence and information sharing and law enforcement cooperation to halt the flow of those fighters.

"In Iraq and Syria, ISIS is attempting to morph into an insurgency. In places like Afghanistan, the Philippines, Libya, West Africa and others it is trying to carve out and secure safe havens," Tillerson said. "We have seen in Iraq and Syria the consequences of an ISIS territorial presence. History must not be allowed to repeat itself elsewhere."