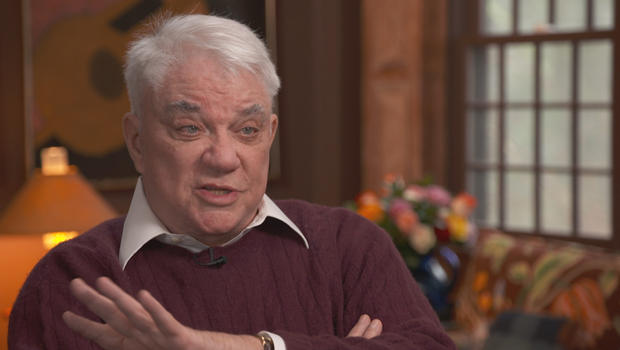 Won't be long before it's time for "THE ENVELOPE, PLEASE..." The Oscars are one month from tonight.  And to hear critic Rex Reed tell it, Gary Oldman could very well be a winner for his performance in "Darkest Hour." There's plenty more where that came from, as our Mo Rocca found out:

"Get Out"?  "Truly one of the worst movies I've ever seen, a complete fraud, that picture. I didn't care if all the black men are turned into robots."  [For the record, there are NO robots in "Get Out."]

And "The Post"? "'The Post' is my favorite movie of the year. I think it's a great movie. You have all these kids making movies today, but they can't compare to a real pro like Spielberg."

Rocca asked, "Are you going to watch the Oscars?"

"Oh, I always do. I love to watch the Oscars with a club sandwich in bed."

…While fondly remembering the A-List Oscar parties of yesteryear, thrown by his friend, the actress Polly Bergen.

"And everybody was there," said Reed. "One year I watched the Oscars in Polly's bed with Lucille Ball on one side and Paul Newman on the other."

Reed was sandwiched between those two stars because there was a time when he was an A-Lister himself. And in the late 1960s and '70s, his clever opinions made him a fixture on television.

"That's why I got called back again and again," he laughed. "That's why all of these shows asked me back, because people weren't saying anything. We're right back in that place right now. Nobody has an opinion."

But his true love was the movies. "I grew up watching movies because I was studying them. I was losing myself in these movies."

His father was a supervisor on oil rigs in the Gulf of Mexico, so Reed went to 13 different schools around the South before high school.

"You were constantly having to make new friends?" asked Rocca.

"Constantly. And when they're sitting there and the teacher is saying, 'This is little Rex Reed. He's the new student. We all want to be nice to him!' And they would take out their slingshots and finger their slingshots, waiting for recess. No, that doesn't exactly feed security."

He got a degree in journalism from Louisiana State University, and dreamed of a life in the big city. "I wanted to go somewhere where people knew things and they served drinks with umbrellas in them, like I saw in Jane Powell movies."

… So he headed to New York City, where he made a name for himself profiling some very big names: Warren Beatty, playwright Tennessee Williams, and a much-lauded portrait of faded screen siren Ava Gardner. "After it came out, she was quoted as saying, 'That sonofabitch knows more about me than I do!'"

In Rex Reed's life, the past is always present, with photographs of celebrities like Natalie Wood. "I really loved Natalie and stayed with her many times," he said.

Rocca asked, "I was just wondering, do you think Robert Wagner killed her?"

"No!" Reed laughed. "There is no truth to that whatsoever!"

And there's Angela Lansbury! ("We've been everywhere together"). And here's Liza Minnelli! (We've been through a lot together.)

Reed was enough of a celebrity himself to be cast in a few movies, including a notorious 1970 sex comedy, "Myra Breckinridge," starring Raquel Welch.

Rocca said, "If I were really doing my job, I would have watched 'Myra Breckinridge' before this interview."

"No, you're doing yourself a great favor by supporting your IQ, by not watching 'Myra Breckinridge,'" Reed replied.

His own review of the experience? "Oh, it was horrible."

And the film flopped. But it did pay for a 1780 house in Litchfield County, Connecticut -- near the road where Marilyn Monroe took walks in hot pants, and not far from artist Alexander Calder, who painted a bathtub for a former owner of Reed's home.

Reed, by the way, has never taken a bath in it. "I'm afraid of damaging it. It's priceless."

Rocca asked, "How much is this bathtub worth?"

"Well, I was offered a million dollars for it."

Like? "Well, like telling somebody where you are all the time. I don't want anybody to ask me, 'Where were you last night? I tried to reach you with my phone and you didn't answer.'"

The 79-year-old's opinions are now published online in the Observer, formerly the New York Observer newspaper, where some of his criticism has come in for plenty of, well, criticism.

"Oh, I don't apologize for anything," he said.

Not even his blistering review of Best Picture nominee "The Shape of Water" ["A loopy, lunkheaded load of drivel"], which confused director Guillermo del Toro with actor Benicio del Toro; and got his country of origin wrong.

"And you referred to Sally Hawkins' character, who is mute, as mentally handicapped," said Rocca.

Of course, today everyone's a critic, quite literally, in the age of social media.

Rocca asked, "How long are you gonna keep doing this?"

"Well, I say 'It's over' almost always. I don't want to be discovered dead in a chair in a dark screening room and have the headlines read, 'Film critic Rex Reed found dead in 'Star Wars LXXX.'"

But while Rex Reed's still got life in him, he's got lots of opinions. Here are a few:

"He was drunk all the time."

"She was terrible and sold millions of records."

"He was incredibly difficult."

He added, "I should really learn to speak up."

"Yeah, you really gotta come out of your shell," Rocca suggested.