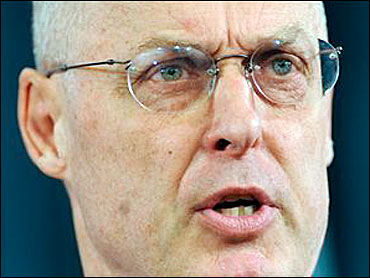 This column, Other People's Money, is written by CNET's Declan McCullagh. It appears each Wednesday on CBSNews.com.

I understand that House Speaker Nancy Pelosi and Senate Majority Leader Harry Reid are urging you to hand $25 billion or more to Detroit's nearly bankrupt automakers. While President-elect Obama indicated on 60 Minutes that he likes the idea, the Bush administration has been skeptical.

That is unfortunate. Bailing out companies that lose money on every vehicle they manufacture and cannot adapt to changing market conditions is not merely necessary in today's economic climate -- it's the American way.

It would be shortsighted to stop at GM, Ford, and Chrysler. My modest proposal is that plenty of other nondeserving companies could use a helping hand.

Mervyn's department store can't compete with its rivals on price, selection, and locations. But its stores are a fixture of local neighborhoods across California and the West, and the federal government surely has an obligation to prop up this failed company -- even if it means everyone else pays more in taxes. This is the price we pay for keeping part of the American dream alive.

Managers at another retailer, Steve & Barry's, also made bad decisions. Today the failing company employs over 5,000 people, and it would be unreasonable to expect them to search for new jobs.

Because Circuit City was unable to keep up with Best Buy, it filed for bankruptcy protection last week. Bailing out this failed retailer would stimulate the economy by allowing it to go about the important business of outfitting Americans with 52-inch LCD TVs.

Trendy, unprofitable Web 2.0 startups are endangered. CNET's tech layoffs scorecard shows that Helium.com, Eons.com, ManiaTV.com, Imeem.com, Zivity.com, and Jaxtr.com have been struggling. So what if Al Gore's Current Media cable network has a self-described "history of losses" -- don't the San Francisco hipsters who recently lost their jobs there deserve a little bailout love?

Spoilsports point out that we have a record federal debt and already spent around $4.28 trillion on bailouts and guarantees. That misses the point. As Federal Reserve Chairman Ben Bernanke correctly observed, our government's printing press "allows it to produce as many U.S. dollars as it wishes at essentially no cost." There's really no downside.

With another $50 billion or so, Countrywide could have avoided its pennies-on-the-dollar sale to Bank of America. That led to an unfortunate situation for Angelo Mozilo, the Countrywide CEO and chairman who greased his way to more than $400 million in riches in part by handing out below-market-rate loans to favorite politicians, including an Obama aide and Senate Banking Chairman Chris Dodd. A bailout would have let Mozilo, an upstanding American success story, keep his job.

Smaller companies are not immune. Take Oregon-based Marnella Homes, which apparently believed that the housing bubble would never pop. Without an immediate bailout, owner Tony Marnella may lose his Maserati. Time is of the essence.

Let's not forget journalists. Newspapers are losing readers, advertising, and employees. Did you know that the Christian Science Monitor will cease publishing in print form? Not only is a media bailout necessary -- and you can count on some glowing editorials -- but perhaps you can do something about the Craigslist problem while you're at it.

Chrysler deserves a bailout. The car maker is owned by Cerberus Capital Management, a private equity firm that counts former vice president Dan Quayle as an executive. President George W. Bush's former Treasury Secretary, John Snow, is chairman. Taxpayers will understand that prominent Republicans and their colleagues must be rewarded for their distinguished service.

It's true that the United Auto Workers union demands above-market wages and featherbedding, such as a "Jobs Bank" program that pays people not to work, and has hamstrung Detroit's competitiveness. And it's true that the auto makers themselves have made one or two tiny mistakes, like GM's vice chairman dismissing the Toyota Prius as a public relations stunt.

But bailout opponents are short-sighted. Earlier this week, GM Chairman Rick Wagoner wrote: "Nearly a half-century ago President Kennedy declared that his generation of Americans was living in extraordinary times and facing extraordinary challenges. Our times are no less challenging. They demand solutions that are creative and courageous."

What could be more courageous than bailing out a failing company that paid Wagoner $15.7 million last year? That's a surely-justified increase of

You may be concerned that by rewarding failure, you encourage it. The reality, of course, is that layoffs must be discouraged through any means necessary. One option would be a law preventing employers from firing workers until the current crisis is resolved, which would also eliminate unemployment payments and reduce the unemployment rate.

Killjoy economists no doubt will prattle about capitalism. Some nabob will point out that nowhere in the U.S. Constitution is the federal government granted the authority to bail out private companies. Ignore them. We must remain true to our nation's founding principles: no company may be allowed to fail.

As Wagoner said, it's vital that you remain courageous as you steel yourself for the daunting task of doling out other people's money. The future of the republic depends on it.