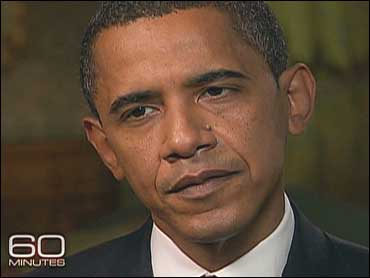 Since Barack Obama was elected the 44th president of the United States 12 days ago, he has largely remained out of sight, getting high-level government briefings and conferring with his transition team. But he surfaced on Friday afternoon in Chicago, alongside his wife Michelle to give 60 Minutes his first post-election interview.

It covers a wide range of subjects including the economy, the ailing automobile industry, the government's $700 billion bailout program, their visit to the White House, the emotions of election night and the quest for a family dog. You'll hear all of it. But we begin with the president-elect and his thoughts about the new job.


Steve Kroft: So here we are.

President-elect Barack Obama: Here we are.

Kroft: How's your life changed in the last ten days?

Mr. Obama: Well, I tell you what, there seem to be more people hovering around me. That's for sure. And, on the other hand, I'm sleeping in my own bed over the last ten days, which is quite a treat. Michelle always wakes up earlier than I do. So listen to her roaming around and having the girls come in and, you know, jump in your bed. It's a great feeling. Yeah.

Kroft: Has this been easier than the campaign trail?

Mr. Obama: Well, it's different. I think that during the campaign it is just a constant frenetic, forward momentum. Here, I'm stationary. But the issues come to you. And we've got a lot of work to do. We've got a lot of problems, a lot of big challenges.

Kroft: Have there been moments when you've said, 'What did I get myself into?'

Mr. Obama: Surprisingly enough, I feel right now that I'm doing what I should be doing. That gives me a certain sense of calm. I will say that the challenges that we're confronting are enormous. And they're multiple. And so there are times during the course of a given a day where you think, 'Where do I start?'

Kroft: What have you been concentrating on this week?

Mr. Obama: Couple of things. Number one, I think it's important to get a national security team in place because transition periods are potentially times of vulnerability to a terrorist attack. We wanna make sure that there is as seamless a transition on national security as possible. Obviously the economy. Talking to top economic advisors about how we're gonna create jobs, how we get the economy back on track and what do we do in terms of some long-term issues like energy and healthcare. And how do we sequence those things in a way that we can actually get things through Congress?

Kroft: Are you in sync with Secretary Paulson in terms of how the $700 billion is being used?

Mr. Obama: Well, look, Hank Paulson has worked tirelessly under some very difficult circumstances. We've got an unprecedented crisis, or at least something that we have not seen since the Great Depression. And I think Hank would be the first one to acknowledge that probably not everything that's been done has worked the way he had hoped it would work. But I'm less interested in looking backwards than I am in looking forwards.

Kroft: The government has spent almost $300 billion out of the TARP program.

Mr. Obama: I think the part of the way to think about it is things could be worse. I mean, we could have seen a lot more bank failures over the last several months. We could have seen an even more rapid deterioration of the economy, even a bigger drop in the stock market. So part of what we have to measure against is what didn't happen and not just what has happened.

Having said that, there's no doubt that we have not been able yet to reset the confidence in the financial markets and in the consumer markets and among businesses that allow the economy to move forward in a strong way. And my job as president is gonna be to make sure that we restore that confidence.

The President-elect and Mrs. Obama have already been on a tour of their new home. In the =4607908>