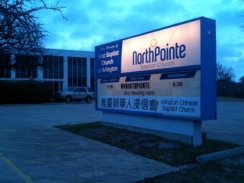 (CBS/KTVT) ARLINGTON, Texas - Steven Lawayne Nelson, 24, and Anthony Gregory Springs, 19, were both arrested and charged with capital murder Monday following the suffocation of Rev. Clinton Dobson and the brutal beating of his assistant.

Rev. Dobson was found dead in NorthPointe Baptist Church in Arlington on Thursday, and his assistant Judy Elliott was beaten badly.

Elliott, 69, is still remains hospitalized and has not been able to speak with investigators yet.

"Hopefully we'll be able to speak with the surviving victim, so that we can get an idea of how entry was gained and we can confirm what may have occurred," Arlington Deputy Police Chief Jaimie Ayala said to the station.

Police say cooperation from the public and the leads they provided played a big role in the investigation. Investigators say that includes information from two women who were with Nelson and Springs after Dobson's murder.

In a four-page affidavit, police state "while watching television, a news story about the incident played before the group. Both Nelson and Springs began laughing and making inappropriate comments about Dobson's death. Both females know Nelson and Springs to commit aggravated robberies together and they were recently trying to rob people within the past couple of days."

The affidavit also says Nelson confessed to Springs that he had robbed the church and further admitted he had killed Dobson.

Police have said robbery appears to have been a motive in the case.

Nelson and Springs are each being held in the Arlington City Jail on bail totaling more than $1 million.