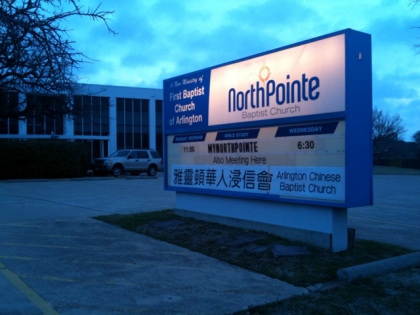 (CBS/AP) ARLINGTON, Texas - One man is in custody and another has been named a person of interest in a brutal attack inside a north Arlington church Thursday that left its pastor dead and his assistant critically injured.

Police officials said tips from the public helped lead to the identification of Steven Lawayne Nelson, 24, who remained in the Arlington Jail on Monday on suspicion of capital murder. Nelson is accused of suffocating the Rev. Clint Dobson, 28, while committing a robbery inside NorthPointe Baptist Church, according to the Fort Worth Star-Telegram.

Tips also led to identification of a man identified in an arrest warrant affidavit as "Anthony Gregory." Police said that is not his full name.

According the affidavit, two friends of the men independently told investigators that on the night of the slaying, Nelson and Gregory began laughing and making inappropriate comments about Dobson's death when viewing a television news story about the case, the Star-Telegram reported.

"When confronted about this behavior, "Gregory" produced an item he claimed belonged to Dobson," the affidavit states.

Police officials said during a news conference Monday afternoon that credit cards were among items stolen in the robbery.

No one answered the door Sunday at the apartment of one of Nelson's relatives where he had been staying.

On Sunday, more than 200 people packed the church where the attack occurred to comfort one another and mourn their young pastor. Some paused at a makeshift memorial of flowers and wreaths and others looked at a picture of Dobson, who was pastor about three years at NorthPointe, a satellite church of First Baptist Church of Arlington, a city of about 380,000 residents between Dallas and Fort Worth. Dobson's funeral is Wednesday.

The Rev. Dennis Wiles, First Baptist's senior pastor, said the 28-year-old Dobson had a gentle demeanor and warm spirit, and that Dobson won a top preaching award as a seminary student.

Wiles told the NorthPointe congregants that it was natural to ask questions at such a troubling time.

"Why did this happen? ... Where was God on Thursday morning? Could God have stopped this?" Wiles preached in the sanctuary, where a large cross is behind the podium. "God has not abandoned you. That's what Jesus said. ... We've got to keep believing, even when we don't understand."