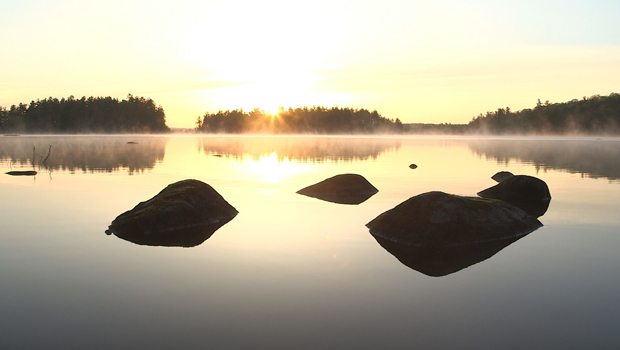 Into the woods is where we're headed now . . . with Don Dahler following the trail blazed a long time ago by one of our greatest naturalists and writers:

The Maine woods, with its vast forests, its rivers, and its lakes is not so very different today than it was when Henry David Thoreau journeyed here in the 1800s, to canoe its waterways, climb its mountains, and learn from his Indian guides.

"I began to be exhilarated by the sight of the wild fir and spruce tops," he wrote. "It was like the sight and odor of cake to a schoolboy."

This spring, 150 years after the publication of Thoreau's essays on the Main woods, a hardy band of modern-day explorers set out to retrace his third (and most ambitious) journey, from Moosehead Lake to the Allagash Wilderness, and back again -- 325 miles in all.

We caught up with them, soaked but undaunted, after four days of hard paddling in the wind and rain, making camp on the shores of Chesuncook Lake.

Maine guide Kevin Slater led the expedition. Dahler asked him, "Why are you out here?"

"'Cause I love it!" Slater replied. "Even when it's like this," indicating the dampness.

He makes his bed of balsam branches, just as Thoreau did: "There, it's starting to look like a nice bed!"

James Francis is tribal historian of the Penobscot Nation. "The eagle in our culture represents the messenger," he said, taking an eagle feather off the canoe: "It's a sign of goodwill for the trip."

For him, this is a journey of reconnection -- with Thoreau, and with his Penobscot ancestor Joe Polis, who guided Thoreau on his journey.

For Thoreau scholar Stan Tag (left, with Don Dahler), the landscape, including the majestic Mount Katahdin, brings new meaning to Thoreau's words. "One of the important things for me has been to put the landscape itself in my body," he said.

"I've climbed Katahdin many times. I've never taken this canoe trip, so to do this, it feels like -- I can read Thoreau's words but it's when I've actually been in the landscape myself, had my own experience there, it's an entirely different experience. And I go back and I read the same words I've been reading over and over again and I see them entirely differently."

"Do you think he saw himself as an explorer or an observer?" asked Dahler.

"Well, Thoreau's always an explorer, but his explorations aren't just physical," Tag said. "They're like spiritual explorations, too. His interest in the Penobscots was not just a kind of a quaint interest, but very much a deep interest in other people and their ways of being in a certain kind of landscape."

Thoreau wrote: "I have much to learn of the Indian -- nothing of the missionary."

He made a list of Indian words he had learned.

Thoreau said the Indian words his guides gave him "gave me a new way of seeing things," said Francis. "Gave me words for things I had only had scientific ones before. And because of this, he saw them in a new light."

On the morning of Day Five, the rain stopped; the skies began to clear, and the little band set out again, heartened by the promise of sun.

Mount Katahdin, in Thoreau's words "a cloud factory," was ahead of them still, shrouded in mist.

"Katahdin," said Francis, "means greatest mountain. And everybody says, 'Oh well, yeah, it's the tallest in Maine.' But that's so irrelevant, because my ancestors wouldn't have known that it was the tallest. So there's something else inherent -- some inherent greatness to Katahdin that's beyond that it's the tallest. That really intrigues me."

This is a place where it is possible to reconnect, as Thoreau set out to do, with the spirits of nature and the whispers of the past.