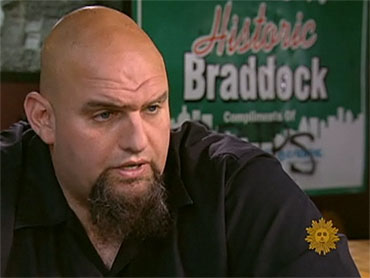 Today the citizens of a once-prosperous Pennsylvania town are fighting to create a new birth of prosperity, to reverse the effects of a long economic decline. Jeff Glor shows us the Then . . . and the Now:

In the age of Big Steel, towns like Braddock, Pa., were the backbone of America's industrial might . . . a beacon for thousands of immigrants looking for a better life.

The collapse of the U.S. steel industry left this borough in the shadow of Pittsburgh in ruins. Trains don't stop here anymore; storefronts are shuttered, homes crumbling.

In fact, Braddock has fallen so far, the 2009 movie "The Road" - set in a post-apocalyptic wasteland - was filmed on its empty streets.

Today, 90 percent of the population of Braddock has left; less than three thousand people remain. The poverty rate here is three times the national average. There is no restaurant or ATM, gas station or supermarket.

But for the people who stayed in this small town there is hope . . . and it comes in the form of a very large man.

"There's no chamber of commerce kind of shiny spin that you can put on a community that has endured the kind of chaos and upheaval that a place like Braddock has," Fetterman said. "This is the tragic end result of what happens when a region, a town, a street, a house is effectively allowed to fail."

He's a man whose dreams for this shattered town match his mammoth figure .

The 40-year-old Fetterman wears Braddock's past, literally, on his sleeves - the zip code tattooed on one arm, the dates of murders on the other.

"The worst days of my life, because these are days that we lost people through senseless violence," he said.

Just one look at Fetterman and it's hard to believe he was born into a wealthy family in Eastern Pennsylvania, or that he has a master's degree in public policy from Harvard.

He first showed up in Braddock nine years ago doing community service.

To those who ask 'Why? Why you're doing this?' he responds, "Why not?"

Fetterman said what he calls Braddock's "malignant beauty" kept him here. In 2005, he ran for mayor and won by one vote. Last year, he was re-elected in a landslide.

"Did you ever imagine yourself as mayor of Braddock, Pa.?" Glor asked.

"No. It all evolved, where every investment that I made in the community, whether it was emotional, physical or financial, was rewarded. And it made sense to continue on."

His first investment in the town was his home, an old warehouse he bought for $2,000. It has what he calls a million-dollar view: "Yeah, from my perspective, it doesn't get any better or more historic than this."

His Brazilian wife, Giselle, shares his view. She came to Braddock from New Jersey three years ago on a whim after hearing about his work.

She also sees beauty here. "Of course, absolutely. It's everywhere you look. I think, you know, Braddock is such a colorful place."

The couple has an 18-month-old son, Karl . . . another incentive to give Braddock a future.

Fetterman drained his 401(k) to buy an historic church, and is now turning it into a youth center. The project has been in the works for about seven years.

"When was the last time stained glass was placed into a church window here in Braddock, as opposed to taken out?" he asked. "Certainly it's got to have been at least 50 years. It's really been a really rewarding undertaking."

Even more rewarding when you consider he only makes $150 a month as mayor. He mainly supports himself - and invests in Braddock - with money from his family.

His commitment has attracted a small but growing list of urban pioneers, including a company that turns vegetable oil into biodiesel fuel, and a group from Brooklyn transforming another old church into a new art center . . . a decision that has mystified residents.

"What do they think about your moving here?" Glor asked artist Ruthie Stringer.

"I think some of them think we're crazy," she replied.

Stringer admits it has not been easy, but she's glad she came to Braddock. "It has been extremely challenging," she said, "but that's what makes it exciting."

Fetterman is excited, too. Pittsburgh investors have given money to a number of his projects, including an urban farm he created to promote local produce.

And Levi Strauss, the jean company, is launching a nationwide advertising campaign today featuring Braddock residents. It's also contributing more than a million dollars to help the town.

All of this investment - and his oversized personality - have made John Fetterman somewhat of a media darling.

Glor asked which was right.

"Well, I'd say neither are," Fetterman replied. "It's just a matter of doing what I'm doing. And if anyone cares, that's great, so long as it can benefit the community and the town."

Brown says Fetterman cares more about his own image than the town, and that he's overstepping his authority.

"For some reason he's come to Braddock, which is a predominantly Afro-American community, that he seem to want to be the white savior for this community, and I just feel different," Brown said.

Fetterman's challenges aren't limited to the town council. Residents have to leave for even the most basic services. And earlier this year, in a devastating blow to the town's recovery, the largest business - a hospital that employed 600 workers - shut down, leaving Braddock without ANY healthcare.

"Sometimes it takes somebody new who's not from here to come in and say, 'Geez, have you tried to do something this way or that?' And that's what he's done," she said.

Resident Tina Doose agrees: "All hope is not gone. I think this is just the beginning. I think John has played an important role in putting Braddock on the map."

That may be true, but John Fetterman refuses to set a benchmark for success. He says he just wants to be "useful" . . . and for Braddock to believe it can do better.

"I like to think if there's nothing else that can be taken from the Braddock story, it's that no community deserve to be abandoned, no community deserves to have their back turned on it," he said. "And that there's always an ability to increase or enhance the quality of life for the residents. In fact, I think it's, if anything, it's a moral imperative to do so."