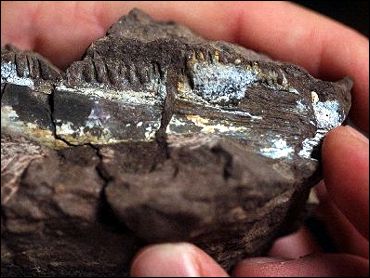 The Wyalusing Rocks were supposed to be just a scenic stop on Jennifer Elick's drive to Tuckhannock, where she and other Pennsylvania geologists planned to meet.

But then a spot of white caught Elick's eye in the red sandstone of those Bradford County cliffs.

"I thought to myself, 'Well, that's either a fossil, a fish fossil, or it's bird doo,'" said Elick, an assistant professor of geological and environmental sciences at Susquehanna University. "I reached up, grabbed it and looked at it, and it had teeth. It was a jaw, and it filled the palm of my hand, and was crumbling all over. That was pretty exciting."

What Elick found was a remnant of Pennsylvania's deep past, a period when what is now Bradford County was a tropical river delta, sitting at the border of land and sea.

Since finding that first fossil, the jaw of a Sarcopterygiian, or lobe-finned fish, in the spring of 2002, Elick has removed four plant and animal fossils from Wyalusing Rocks in northeastern Pennsylvania. All are denizens of the late Devonian period dating to some 350 million to 360 million years ago:

Jon Inners, geologist manager for the Pennsylvania Geological Survey, said it's not surprising that Elick would find these fossils at Wyalusing Rocks, a 400-foot cliff over the Susquehanna River, about 130 miles north-northwest of Philadelphia.

Another fossil bed in the region, Red Hill, is renowned for Devonian fossils, and the Great Catskill Delta in New York and Pennsylvania is yielding more and more finds.

"But it's always neat because it's so rare," said Inners, who had examined the same cliffs before without finding anything.

"These rocks were red rocks, stuff that formed on river flood plains and river channels. And in these oxidized sediments fossils are mostly destroyed, they rot away. It takes rather peculiar conditions to preserve them," Inners said. "Somehow, the oxidizing waters did not get through to the fish that were buried there enough to decompose them. There were some hard parts that would have been preserved, but it's just rare to find fossils as complete as she found them."

The Sarcopterygiian jaw is so detailed that even the teeth, some almost an inch long, are clearly visible. The fish itself was probably at least 3 feet long, Elick said.

But the most interesting fossil might be the one Elick left behind — a trace fossil, or the remnant not just of a creature, but of that creature's movement.

About 9 feet long and 6 inches wide, the trace appears to be left by a Sarcopterygiian, a fish whose fins had the same bone structure as arms on other vertebrates. The Sarcopterygiian is also thought to have been a precursor to amphibian development (although Elick points out that amphibians probably would have been around during the late Devonian, when her fossils were made).

The trace appears as a shallow trough, as if left by something skimming just above the silty soil of a river bottom. Traces along the side of the trough could have been made by the fish's fins.

In prehistoric circles, dinosaurs get all the glory. But Elick said she hopes her discoveries on Wyalusing Rocks might get people interested in the creatures that ruled the world millions of years before dinosaurs came along.