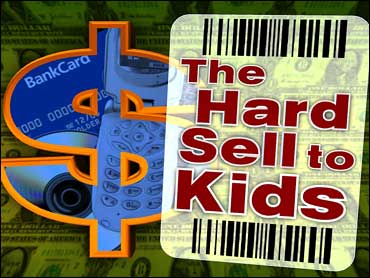 In 1983, companies spent $100 million marketing to kids. Today, they're spending nearly $17 billion annually. That's more than double what it was in 1992.

But the choice method of spending parents' green is morphing.

By the time a college student has graduated, changes are that he or she will have more than $3,000 in credit card debt — and have four or more credit cards. As young adults grow more comfortable with spending on plastic, credit card companies are aiming at making a generation of future credit afficianados — and are marketing at kids as young as 3 years old.

Credit cards are featured in games for kids as well as toys such as Barbie. Pre-pay cards that parents can give to kids are seen by some as "credit cards with training wheels," but can also be a convenience for parents, allowing them to track their child's purchases.

Cards such as PAYjr and Visa Buxx are popular for kids, and may be changing the way Generation Next views money.

"The reality is that my kids and really any child or teenager today is likely to never write a check or even use cash for that matter," PAYjr CEO David Jones says.

For statistics on students and credit cards, check out a United College Marketing Services study.

Check out The Truth About Credit page from the U.S. Public Interest Research Group.

More resources for young people looking for financial help or advice can be found at Young Americans Center For Financial Education.

Are you a student or parent of a student who feels you've been subjected to unfair or dishonest marketing by credit card companies? Tell your story to The Student Public Interest Research Groups.

For an entertaining way to teach teens about the troubles of debt, the movie Maxed Out is an award-winning film that contains some individual and national lessons.

As your child approaches college, some of the lessons about credit card debt can also be applied to college loans. The group Americans for Fairness in Lending has a student loan tipsheet that's worth browsing.

And as kids begin using cell phones at younger and younger ages, marketers are getting savvier about getting kids to approve the spending of their parents' money. From "free" downloads that aren't to ringtones and picture-sharing services that show up on parents' cell-phone bills only months later, when cellphones are in kids' hands, they can be a field day for marketers.

That is, unless kids know what to look out for. Doug Fodeman started an awareness group after his daughter got hit by a cellphone scam. Check it out here.

And certain cellphone companies are taking steps to focus certain phones at young kids. The good news is that some also put limits on or nix kids' ability to buy phone extras — through scams or otherwise — without parents' consent. Check out Kajeet, Firefly Phones and AT&T Smart Limits.

Kids' exposure to so much advertising has been shown to harm more than just parents' pocketbooks. In fact, a task force from the American Psychological Association has recommended that advertising targeting children under the age of 8 be restricted.

That's because kids younger than 8 have been shown to be largely unable to distinguish between advertising and other content — especially concerning product placement. For the past few years, advertisements have been prevalent in the online games kids like to pay online. These have been dubbed "advergames," and can subject kids to hours of exposure to everything from McDonalds to movie characters, from Skittles to SpongeBob.

What can parents do?

Aside from limiting your kids' exposure to advertising — a feat that can seem impossible — talking to kids about what sorts of marketing they're subjected to is a crucial step in countering advertising's influence. Web sites like PBS can be used to show kids some of the tricks behind making ads look good.

Educate yourself first. The Center for Media Literacy has a list of articles such as "How TV Works" and "Idols in the Marketplace" that can teach you before you talk to your children about some of the deceptive ways of advertising.

How young is too young? Read a piece about ad exposure from The Media Channel. Also check out New American Dream's guide to kids and marketing.

Another Commercial Free Childhood. Some interesting facts it includes: Children under the age of 8 do not understand advertising's persuasive intent and older children sometimes fail to recognize product placement as marketing.

And the Children's Advertising Review Unit of the Better Business Bureau has some education resources.

With the advent of interactive technology, children may have enhanced digital television experiences, but they also have more control over what they see. But the advocacy group Children Now says interactive technology "also opens the door to intrusive advertising practices on digital television, similar to those currently used on the Internet." Read more from Children Now.

When computer or video games incorporate advertisements, childrens' exposure time is drastically increased. How are children affected? The only study of "advergaming" was done the Kaiser Family Foundation. Check it out.

Read more about marketing to kids:

CBS News:
"Gotta Have It" Series