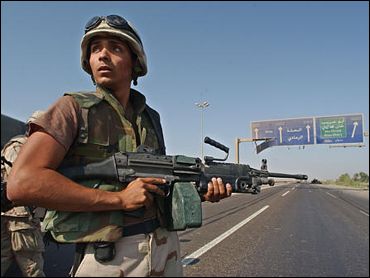 After nearly four years in the Army, including time in Iraq, Jason Pariza was honorably discharged and placed on inactive ready reserves.

He thought his active military obligation was done, until he received a notice saying all inactive ready reserve soldiers would be "involuntarily" transferred.

"I'm trying to get my life back in order, and all of a sudden I find they're trying to stick their nose back in my life," Pariza said.

To avoid being involuntarily assigned to a unit that might be sent back to Iraq, the Army counselor who sent the notice offered to helped Pariza transfer to the unit of his choice.

The Army now says the memo was a miscommunication, reports CBS News Correspondent Randall Pinkston — that the intention was to review reserve files for possible but not definite assignment based on the Army's needs.

But that's not the message thousands of vets received in letters and phone calls from military recruiters.

"The impression I got was either join one of the units he represents or you go overseas," Army reservist Eric Schmidt said. Based on that impression, Schmidt voluntarily joined an active reserve unit.

"I've been hoodwinked into signing something I shouldn't have," Schmidt says.

Administration critics say the controversy is far more than a misunderstanding.

"It's another indication of very poor planning for this whole war against Iraq," said Lawrence Korb, a former assistance defense secretary.

With two wars — in Iraq and Afghanistan — the U.S. military is stretched thin. Some troops are already forced to take longer enlistments, with Guard and Reserve units bearing more of the load.

"They hadn't planned on keeping so many troops in Iraq so long and they put pressure on the recruiters here to get people to get them quickly," Korb said.

Mistake or not, it worked. Enlistments for many active reserve units were up in May.

The National Guard and Reserve soldiers make up at least one-third of the 135,000 American troops in Iraq.

At least 22 citizen soldiers died, nearly one-third of all U.S. losses in May. As a percentage of the month's death toll, that is about double what it had been in most previous months of the war. It also shows that the Guard and Reserve are bearing an increasing combat load.

Three states — Arkansas, North Carolina and Washington — now have an Army National Guard combat brigade in Iraq. In the next rotation of troops that will begin late this summer, there will be at least three others, and probably a fourth, plus a National Guard division headquarters.

The most persistent killer, more than a year after President Bush declared major combat over, is the homemade roadside bomb. The military calls it an improvised explosive device. This month, they have killed least 19 soldiers, seven of them National Guardsmen.

Others have been killed by snipers and suicide bombers, as well as mortars, rocket-propelled grenades and other weapons. Accidents, including two electrocutions, also have taken a toll.

In total, the Iraq conflict has taken the lives of more than 800 American troops so far, and last week the Pentagon reported that the number wounded in action is approaching 4,700.

Among the 22 citizen soldiers killed in May was Staff Sgt. William D. Chaney, of the Illinois Army National Guard. At age 59, he was the oldest soldier to die in Iraq since the invasion began.

Chaney, of Schaumburg, Ill., died May 18 at a U.S. military hospital in Germany of complications following surgery for a noncombat related condition that he developed while in Iraq.

A Navy Reserve unit, the Naval Mobile Construction Battalion 14, based in Jacksonville, Fla., suffered extensive losses in May. Five of its men were killed and 28 were wounded in a mortar attack on a Marine base near the city of Ramadi in western Iraq on May 2. Two days earlier, two other members of that unit were killed when their vehicle convoy was hit by a homemade bomb.