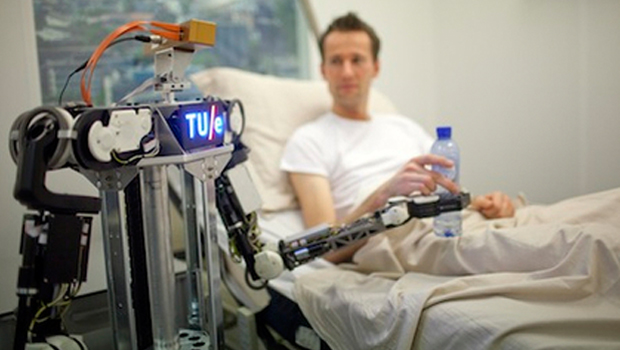 No, the robots aren’t self-aware yet, but a team of researchers is demonstrating how networked machines learn from each other and create what they call a “Wikipedia of robots.”

Researchers at Eindhoven University of Technology in the Netherlands on Thursday are demonstrating the abilities of four robots connected through the Internet, by putting them in a hospital setting. One of the machines is a robotic arm and another is robot mounted with a camera and can drive around.

“A different robot goes to the other room where the patient is. He receives all the data from the other robot. He doesn’t need to learn the environment all over again,” researcher Dr. Heico Sandee said on a call with CBS News.

The robots in the demonstration will draw data from a knowledge base, which gets sorted through a cloud engine before it gets relayed to the robots. The cloud engine makes it possible for robots to increase the speed of learning, by doing the heavy computations remotely.

The researchers are leveraging technology like sensor data, networking technology and data-mining tools to create the cloud knowledge base.

Sandee says the researchers are trying to find a way to allow robots to communicate with each other. The demonstration is part of a project four years in the making called RoboEarth that aims to create a database online, which lets robots worldwide share information.

The researchers want to solve the problem of thousands of computer systems solving the same problem over and over again. By creating the cloud database, a robot would only have to learn a particular task once to benefit the network of machines.

“We’re not drawing a map such that a robot can navigate, but we [teach] a robot how to make its own map -- how to be flexible to unexpected behavior,” Sandee said.