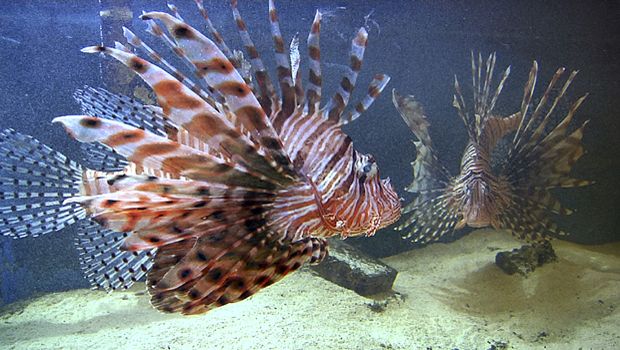 A sixth grade Florida girl's science fair project on lionfish was hailed as a "breakthrough" and got media attention nationwide, but now a scientist who studied the invasive fish species for years claims it was not really her breakthrough at all.

The researcher, Zack Jud, says that Lauren Arrington based her now-viral science project on work he had previously published while obtaining his doctorate degree.

Published in 2011, the original study -- which Jud worked on with Arrington's father, Albrey, and others -- showed that lionfish had been found upriver, away from the ocean where they normally live. He established that these fish had the ability to settle well into estuarine systems, where freshwater from rivers and streams flows into the ocean.

Arrington did her science project the following year, proving that lionfish could tolerate even lower levels of salinity in the water. When a later study, done by Jud and two other scientists, confirmed her results, they acknowledged the young girl's scientific contribution, setting off the recent media frenzy.

Earlier this month, Arrington, now 13 years old, told CBS News that she came up with the idea for her science fair project after spotting a saltwater lionfish in a Florida river. Her story was also covered by many other news outlets nationwide, and as the young girl's "discovery" went viral, Jud took to Facebook, asking his friends and colleagues for advice.

"My lionfish research is going viral...but my name has been intentionally left out of the stories, replaced by the name of the 12-year-old daughter of my former supervisor's best friend," he wrote in a Facebook post dated July 21. "Anything I say will come off as an attempt to steal a little girl's thunder, but it's unethical for her and her father to continue to claim the discovery of lionfish in estuaries as her own."

In an email to The Scientist magazine, Arrington's father mentioned that Jud's research had not determined the lowest salinity lionfish can live in. However, Jud told The Scientist that he had planned on doing the experiment, but other projects had kept him busy.

In an email conversation with the senior Arrington, as seen by the magazine, Jud had asked if his previous work would be credited. Arrington said he did so, repeatedly, and put the blame on the media for ignoring Jud's previous work while telling the girl's story.

Another former colleague, North Carolina State University ecologist Craig Layman, agrees. One of the scientists involved in the study that confirmed Lauren's findings, Layman writes in a blog post, "I am glad tens of thousands of people now know about Zack's research and Lauren's project that never would have otherwise. But it is unfortunate how it played out in such a manner over the last few weeks."