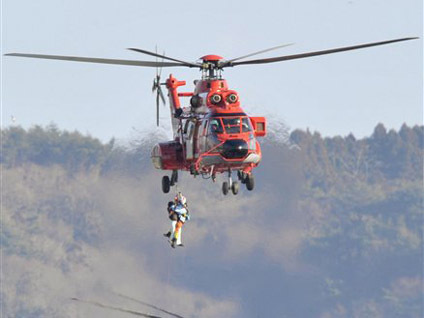 The violence of the earth continues in Japan following Friday's epic quake and tsunami. There have been more than 125 aftershocks since the 8.9-magnitude that devastated the country's northeast.

Japan is digging itself out of the rubble and wreckage, with the worst scenes of death and massive destruction in northeastern Japan, where thousands of homes and businesses were destroyed and thousands of people displaced.

Overall, the country's official death toll stood at 686, although local media reports said at least 1,300 people may have been killed.

Prime Minister Naoto Kan said 50,000 troops would join rescue and recovery efforts, and rescuers still had not reached some of the hardest-hit areas by late Saturday, some 30 hours after the quake.

In Sendai, police said they found 200 to 300 bodies washed up on beaches, but authorities were still assessing the extent of the devastation in the city and along the nearby coast.

Rail operators lost contact with four trains running on coastal lines Friday and still had not found them by Saturday afternoon, Kyodo News agency reported. East Japan Railway Co. said it did not know how many people were aboard.

The plant's operator is working against the clock to try to head off a radiation leak.

Photos: Search and rescue in Japan
Special report: Disaster in Japan
How you can help - a guide to relief organizations
Meltdown concerns at damaged Japan nuke plant

On Saturday, a day after a massive tsunami tore through Sendai, residents surveyed the devastation that has laid waste to whole sections of the northern port of 1 million people, 80 miles from the epicenter of the 8.9-magnitude earthquake that set off one of the greatest disasters in Japan's history.

Rescue workers plied boats through murky waters around flooded structures, nosing their way through a sea of detritus, while smoke from at least one large fire billowed in the distance. Power and phone reception remained cut as the city continued to be jolted by powerful aftershocks.

Hundreds of people lined up outside the few still-operating supermarkets in Sendai, stocking up on drinks and instant noodles, knowing it would be a long time before life returns to anything like normal. Some recalled how they cheated death as the massive waves swept some 6 miles inland.

A convenience store 3 miles from the shore was open for business, though there was no power and the floors were covered with a thick layer of grime.

"The flood came in from behind the store and swept around both sides," said shop owner Wakio Fushima. "Cars were flowing right by."

Many Sendai residents spent the night outdoors, or wandering debris-strewn streets, unable to return to homes damaged or destroyed by the quake or tsunami. Those who did find a place to rest for the night awoke to scenes of utter devastation.

The city's Wakabayashi district, which runs directly up to the sea, was a swampy wasteland with murky, waist-high water. Most houses were completely flattened, as if a giant bulldozer had swept through.

Satako Yusawa, 69, said she has felt many earthquakes but never anything like what hit Friday afternoon.

"I was having tea at a friend's house when the quake hit. We were desperately trying to hold the furniture up, but the shaking was so fierce that we just panicked," she said.

She said her son had just borrowed a large amount of money to build a house, and the family moved in on Feb. 11. Luckily, he was out of town when the quake and tsunami hit, but on Saturday they couldn't find the house, or even where it used to stand.

Yusawa broke into tears as she looked out over the devastation.

At an electronics story in the city, workers gave away batteries, flashlights and cell phone chargers. Several dozen people waited patiently outside.

From a distance, the store appeared to have survived the devastation intact. But a closer look revealed several smashed windows and slightly buckled walls.

Inside was chaos. The ceiling of the second floor had collapsed, and large TVs, air conditioners and other products lay smashed and strewn about the aisles.

The contents of the entire building were soaked by the automatic sprinklers that were triggered by the quake.

"Things were shaking so much we couldn't stand up," said Hiroyuki Kamada, who was working in the store when the initial quake hit. "After three or four minutes it lessened a bit and we dashed outside."

The tsunami directly hit the city's dock area and then barreled down a long approach road, carrying giant metal shipping containers about a mile inland and smashing buildings along the way.

Hundreds of cars and trucks were strewn throughout the area -- on top of buildings, wedged into stairwells, standing on their noses or leaning against each other as if in prayer.

Most ships in port managed to escape to sea before the tsunami hit, but a large Korean ship was swept onto the dock.

Most buildings out of range of the tsunami appeared to have survived the quake without much damage, though some older wooden structures were toppled. Paved roads had buckled in some places.

Cell phone saleswoman Naomi Ishizawa, 24, was working when the quake hit in the mid afternoon. She said it took until nightfall to reach her house just outside Sendai and check on her parents, who were both OK. Their home was still standing, but the walls of a bedroom and bathroom had collapsed and debris was strewn throughout.

And yet, she was lucky. The tsunami's inland march stopped just short of her residence; other houses in her neighborhood were totally destroyed.

Like many people throughout Japan's northeast, she had not heard from others in her family and was worried.

"My uncle and his family live in an area near the shore where there were a lot of deaths," Ishizawa said. "We can't reach them."