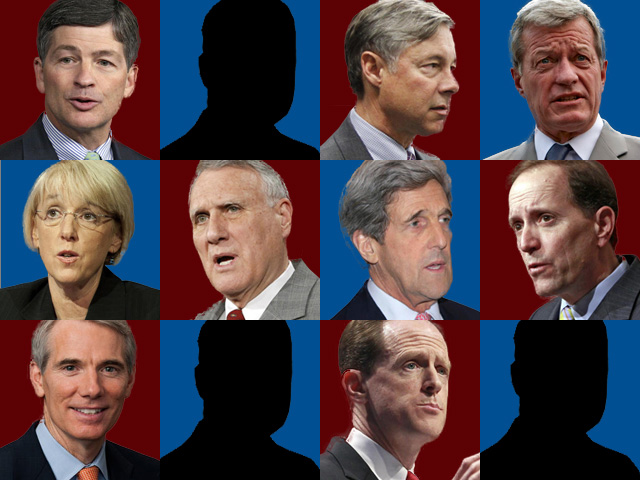 Republican leaders in the House and the Senate today announced their appointees to the 12-member, bipartisan congressional "super committee" charged with finding at least $1.2 trillion in budget savings by Thanksgiving.

In a statement, McConnell said the three senators he's chosen understand the "gravity" of the current economic climate and will bring to the table "the kind of responsibility, creativity, and thoughtfulness that the moment requires."

"The American people know that we cannot dig ourselves out of this situation by nibbling around the edges, and I am confident that each of these nominees can be counted on to propose solutions that put the interests of all Americans ahead of any one political party," McConnell said.

Boehner said in a statement he appointed "proven leaders who have earned the trust and confidence of their colleagues and constituents."

The 12-member group, called the Joint Select Committee on Deficit Reduction, was created as part of the deal to increase the debt ceiling. Along with the three Republican senators and three House Republicans, the group will be comprised of three House Democrats and three Senate Democrats.

There was some expectation that Boehner would name to the committee House Budget Committee Chairman Paul Ryan, author of the controversial House-passed 2012 budget. Ryan released a statement today praising Boehner's appointments and explaining that he asked the speaker to choose others for the job.

The 12-member group has until Nov. 23 to come up with a deficit reduction plan. If a majority approves the plan, the House and Senate must vote on it by December 23. If the plan is rejected, it will automatically trigger $1.2 trillion in cuts in areas like Medicare and national security.

The super committee's goal is to find $1.5 trillion in savings, though it appears it can still meet its mandate if it finds only $1.2 trillion in deficit reduction. The recent downgrade in the U.S. credit rating, however, puts pressure on the committee to seek out greater savings.

House Democratic Leader Nancy Pelosi has yet to name her three picks to the committee, but she released a statement last week calling for the committee's work to be open to the press and the public, and webcast on the Internet.

"Any acceptance of the committee proposal will be dependent on the ability of the American people to fully view its proceedings," she said.

In his statement today, Boehner similarly said, "With all that's at stake, I expect that the joint select committee will conduct its work in the open and transparent manner the American people deserve."

What's Next for The Economy?
What the Debt Deal Means for Jobs and the Economy