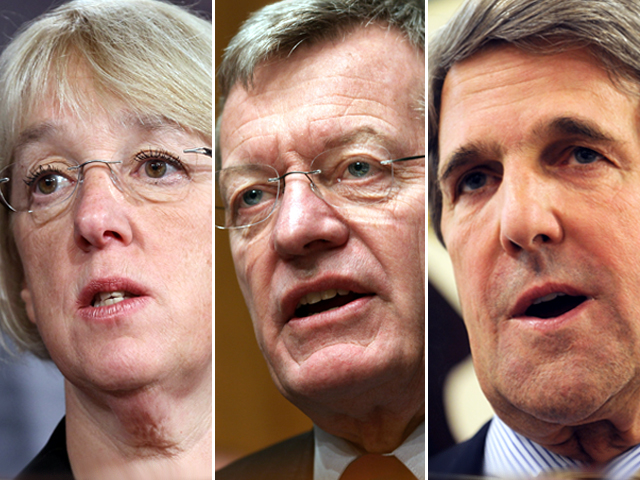 Reid confirmed earlier reports that he name Democratic Sens. Max Baucus of Montana (center) and John Kerry of Massachusetts (right) to the committee.

The Joint Select Committee on Deficit Reduction, which was created as part of the deal to increase the debt ceiling, must vote on recommendations to reduce the deficit by November 23. If a majority approves the recommendations, the House and Senate must vote on them by December 23.

If the committee does not put forth recommendations or Congress does not enact them, $1.2 trillion in across-the-board spending cuts will be automatically triggered, including domestic and military cuts.

The committee's goal will be $1.5 trillion in savings, though in light of the recent downgrade in the U.S. credit rating, it is likely to seek greater savings. But it appears it can still meet its mandate if it finds only $1.2 trillion in deficit reduction.

President Obama and many Democrats are pushing for a "balanced approach"to deficit reduction that includes tax increases on high-earners, "modest adjustments" to Medicare and other health care entitlement programs, and tax reform. Many Republicans, however, have ruled out any revenue increases to address the deficit and debt. It is not clear how the committee could craft a deal that satisfies both the Democratic insistence for revenue increases with Republican opposition.

Reid is expected to make an official announcement in the next few days, as is Boehner, who told members of his caucus in a conference call Tuesday: "You can be confident the people I select to represent our Conference will be people of courage who understand the gravity of this situation and are committed to doing what needs to be done."

Murray chairs the Democratic Senatorial Campaign Committee, which is seeking to get Democrats elected in the 2012 cycle, and is also a senior member of the Budget Committee. Baucus chairs the powerful Senate Finance Committee, which has jurisdiction over entitlement programs and other areas that are likely to be examined by the committee.