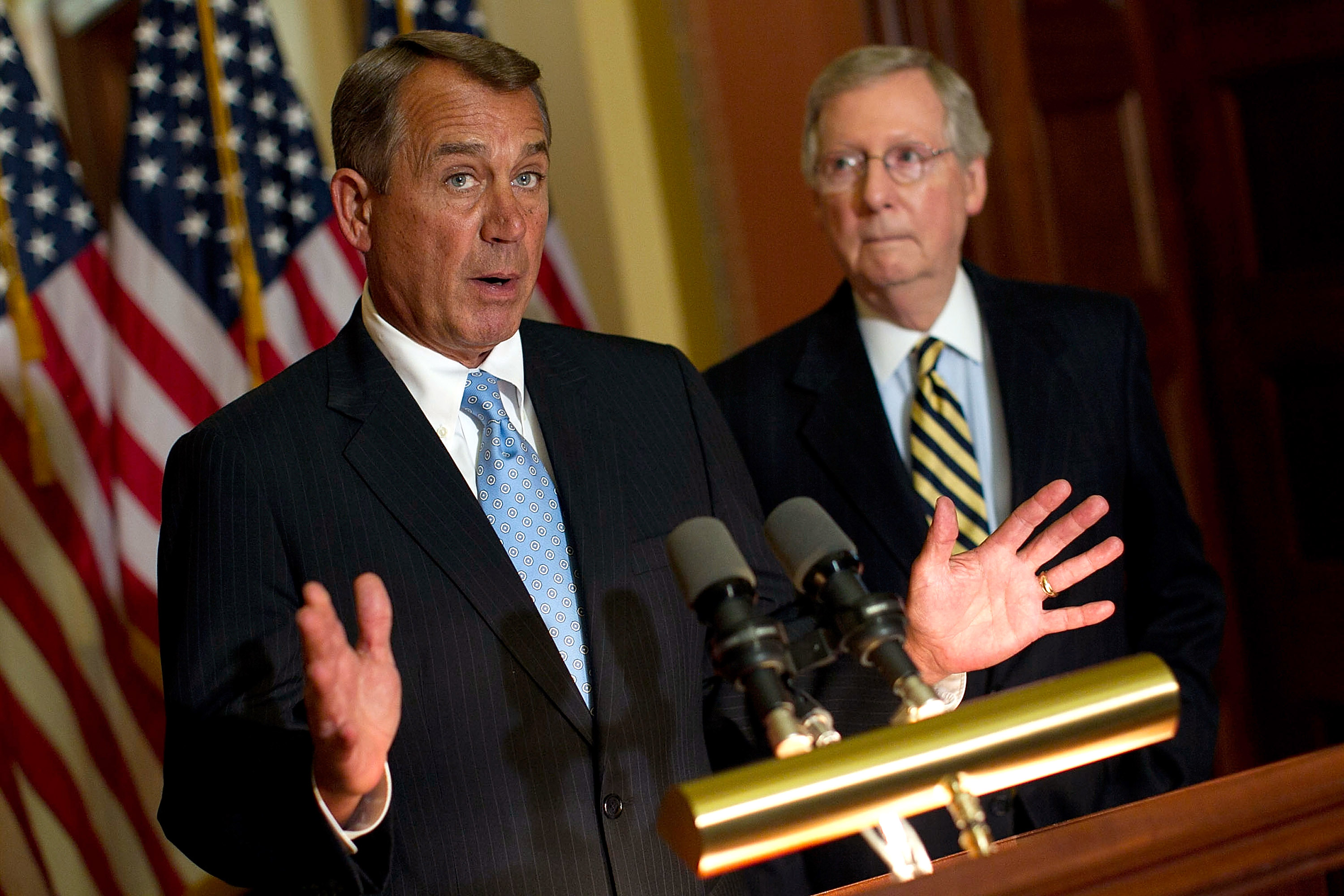 Officials said House Speaker John Boehner, R-Ohio, and Senate Majority Leader Mitch McConnell, R-Ky., were likely to split the stalled bill into two parts in hopes of sending them to the president separately, with Republicans providing most of the needed votes for one part, and Democrats for the other.

The first would consist of stand-alone legislation allowing Congress to approve or reject any future trade deal, but not change it.

The second measure would renew an expiring program of assistance to workers who lose their jobs, as well as extend uncontroversial trade rules for Caribbean Basin countries, Haiti and elsewhere that cleared the House last week.

Congressional officials stressed that no final determination had been made to pursue the rescue plan. They spoke on condition of anonymity because no formal announcement has been made.

If pursued, the move to revive the trade measure would bring what is already a highly public split within the Democratic Party into even sharper focus.

Ironically, Obama is embarking on a West Coast fundraising trip for Democratic candidates this weekend that will take him to San Francisco, home of Rep. Nancy Pelosi, the party's leader in the House. She is expected to attend the event, to be held at the home of billionaire Tom Steyer, well-known for his support of environmental causes.

Pelosi joined the revolt last week that stalled the trade measure that is near the top of the president's second-term agenda. The bill derailed when Democrats, who normally support the assistance program, voted against it in large numbers as a way to bottle up the portions relating to international deals that organized labor and its allies vehemently oppose.

Nor was there any confirmation from the White House that Obama had approved the approach, even though Republicans have said repeatedly he must bear much of the responsibility for rounding up enough Democratic support to salvage a measure that stands as one of his top second-term priorities.

"It's still my hope we can still achieve what we set out to achieve together," McConnell said at a news conference.

Said Boehner, talking separately with reporters earlier in the day, "We're looking for a way forward, and when we find one, we'll let you know." He said he is committed to enacting "fast track" - the term used to describe the negotiating authority Obama seeks - "as soon as possible."

If the plan holds, an attempt might be made to send Obama the two bills before lawmakers begin a scheduled July 4 break at the end of next week. The quick timetable would be designed to blunt any response by labor unions and other opponents of trade deals they argue cost thousands of jobs.

The only public steps to resurrect the trade measure during the day came in the House, which voted 236-189 to allow six more weeks to reconsider Friday's stunning repudiation of Obama by the Democrats.

Republicans voted overwhelming for the new timetable after Boehner privately berated several of them for opposing the GOP leadership on similar questions. Additionally, three lawmakers were kicked off the whip team because they failed to support a key procedural move last week on the trade package. Officials identified the three as Rep. Steve Pearce of New Mexico, Cynthia Lummis of Wyoming and Trent Franks of Arizona.

On the trade bill, whatever rescue approach is attempted, there is little margin for error.

The current bill combining the trade legislation and renewed assistance cleared the Senate last month on a vote of 62-37, only two more than the 60 needed to overcome a filibuster by opponents.

At a minimum, at least six Democrats would be required to vote for a stand-alone bill to enhance Obama's negotiating authority without the aid package that is customarily a party-wide requirement on major trade bills.

Sen. Heidi Heitkamp, D-N.D., who voted for the combined bill, said she is willing to look at the proposed plan. She said it is "critically important" that aid to displaced workers be renewed as part of any agreement.

She also said renewal of the Export-Import Bank, which loses its authority on June 30, "ought to be" part of the legislation.

Sen. Dianne Feinstein, a California Democrat, also said there "has to be some assurance" that the assistance package also gets to the White House.

In the House, far more than 40 Democrats will be needed on the next vote to support the aid to workers, which is generally unpopular among Republicans.