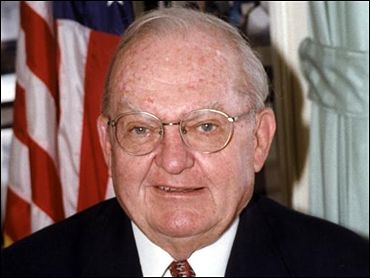 A congressman who heads a homeland security subcommittee said on a radio call-in program that he agreed with the internment of Japanese-Americans during World War II.

Rep. Howard Coble, R-N.C., made the remark Tuesday on WKZL-FM when a caller suggested Arabs in the United States should be confined. Another congressman who was interned as a child criticized Coble for the comment, as did advocacy groups.

Coble, chairman of the Judiciary Subcommittee on Crime, Terrorism and Homeland Security, said he didn't agree with the caller but did agree with President Franklin D. Roosevelt, who established the internment camps.

Like most Arab-Americans today, Coble said, most Japanese-Americans during World War II were not America's enemies.

Still, Coble said, Roosevelt had to consider the nation's security.

Rep. Mike Honda, D-Calif., a Japanese-American who spent his early childhood with his family in an internment camp during World War II, said he spoke with Coble on Wednesday to learn more about his views.

"I'm disappointed that he really doesn't understand the impact of what he said," Honda said. "With his leadership position in Congress, that kind of lack of understanding can lead people down the wrong path."

The Japanese American Citizens League asked Coble to apologize and said he should be removed from his committee chairmanship.

"We are flabbergasted that a man who supports racial profiling and ethnic scapegoating" chairs the subcommittee, the group's national executive director, John Tateishi, said in a statement Wednesday.

The Council on American-Islamic Relations is demanding that Coble explain his remarks. Spokesman Ibrahim Hooper calls the comments "particularly disturbing."

In 1988, President Reagan signed a bill authorizing reparations of $20,000 for each surviving camp veteran.