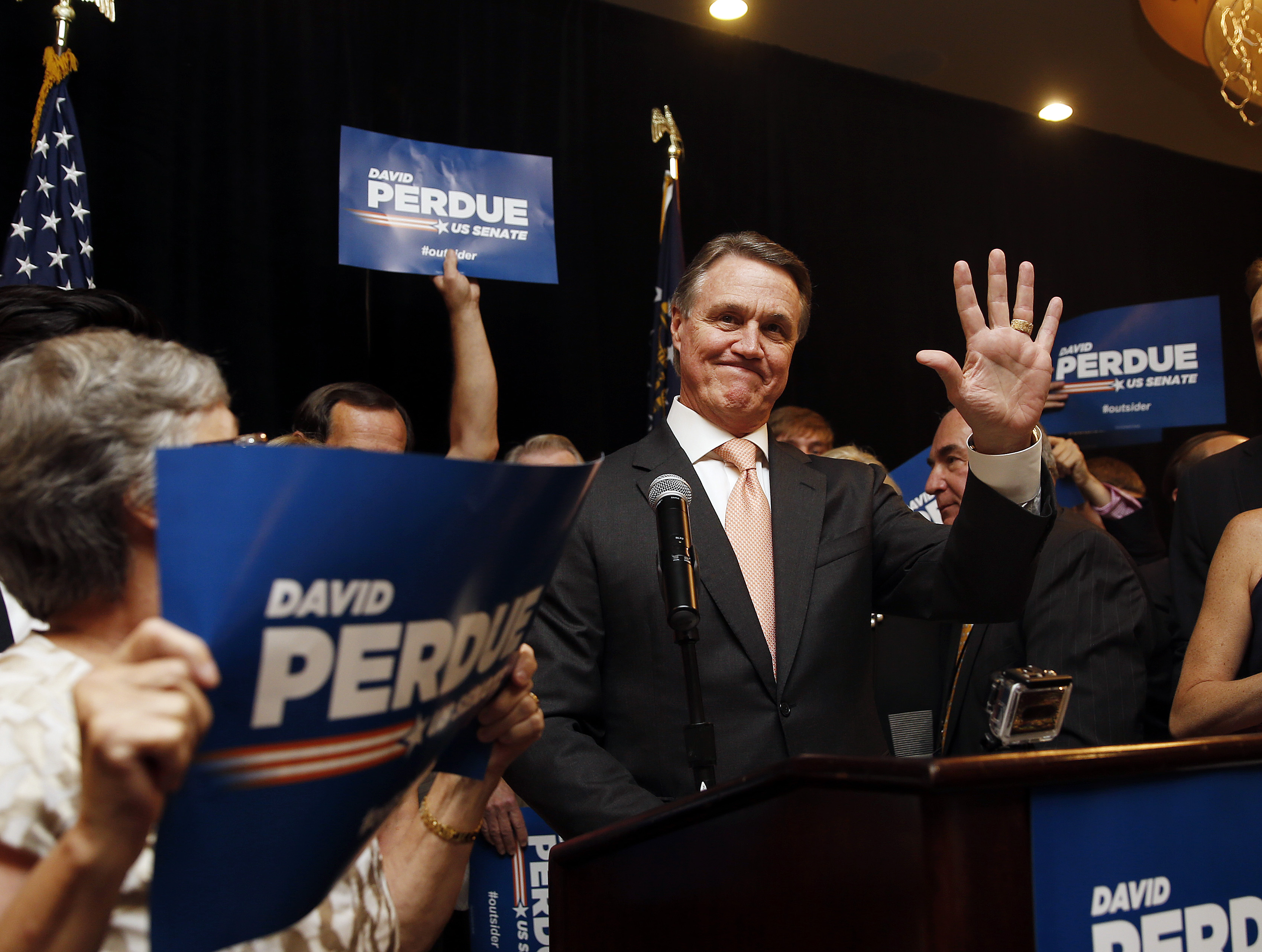 ATLANTA -- Now that Georgia Republicans have settled on businessman David Perdue as their nominee for the state's open Senate seat, the real battle begins with a marquee match-up in the fall against Democrat Michelle Nunn that could help determine control of the chamber.

The contest is one of the nation's most closely-watched in the 2014 elections, and the prospects of Democrats winning a Senate seat in the staunchly conservative state are tantalizing for Nunn and her party as they defend their Senate majority. But Perdue is running as a Washington outsider and has the firepower of his own wealth behind him, having sunk at least $3 million of his own money into winning the GOP nomination against veteran Rep. Jack Kingston.

"I've never run for anything in my life. I'm humbled," Perdue told supporters gathered at a hotel in the Buckhead neighborhood of Atlanta.

Perdue emerged the winner of Tuesday's runoff against Kingston, claiming nearly 51 percent of the vote in unofficial returns. Along the way, Perdue dispatched three sitting congressmen to claim the nomination as he crafted a singular message of being an outsider with the business sense needed to tackle the nation's fiscal problems.

The win marked the end of a bruising, nine-week GOP runoff in which Perdue hammered Kingston as a career politician for his 11 terms in Washington, while Kingston argued voters couldn't trust a self-proclaimed outsider to do what he says he'll do. In the end, voters decided change was needed and went with the political newcomer, whose cousin is former Georgia Gov. Sonny Perdue.

"With my business career, I will prosecute the failed record of the last six years of (President) Barack Obama," Perdue said in his victory speech. "This fall, we're going to have a clear choice."

The outcome was a surprise and disappointment to national Republicans and Democrats alike. As recently as Tuesday, both parties were predicting to us that Kingston would edge out Perdue.

With his long tenure on Capitol Hill, Kingston was the establishment pick. Even the Chamber of Commerce, which typically backs business-friendly candidates, refused to endorse Perdue, despite his background as CEO of Reebok and Dollar General. The Chamber spent $3 million backing Kingston.

Nunn, the daughter of former Sen. Sam Nunn, is considered among the top Democratic recruits in the country and one of the best hopes for Democrats to keep control of the Senate for the last two years of Obama's term. But Nunn could have a harder time running as an anti-Washington outsider against Perdue, who's a political novice himself. She could also have a tougher time picking up moderate independents in the Atlanta suburbs in a race against a business republican like Perdue, who grew up in nearby Macon, than she would have in a race against Kingston, who hails from the more conservative Savannah area.

Republicans need to gain just six seats for the majority and cannot afford to lose the Georgia seat, which opened when Republican Sen. Saxby Chambliss announced his retirement. Georgia is one of only two states where Democrats have a chance to turn a red Senate seat blue in November. The other state is Kentucky, where Democratic Secretary of State Alison Grimes is trying to knock off Senate Minority Leader Mitch McConnell.

The race between Nunn and Perdue will shape up largely as two outsiders battling for moderate and independent voters in a state that has voted reliably Republican in recent years, with Perdue looking to lay blame for the nation's problems with Democrats in Washington and Nunn emphasizing her independence and commitment to doing what is right. Millions of dollars in outside money is expected to pour in.

Nunn's TV ads have so far focused on introducing her to voters and emphasizing her experience as CEO of the large volunteer organization Points of Light, which was founded by former President George H.W. Bush. Nunn has looked to lay blame with both parties for gridlock in Washington.

"People are awfully tired of the political atmosphere today and what they perceive as a Washington that is just not up to governing, and not willing to put aside party differences and focusing on playing games versus actually solving problems that make a difference for people," Nunn said in an interview.

Immediate challenges for Perdue will be to quickly raise money and rally support among the GOP establishment, which had largely backed Kingston. For his part, Kingston pledged to work to get Perdue elected.

Former state GOP Chair Sue Everhart, who supported Kingston in the runoff, said she expected Republicans would fall in line behind Perdue.

"Republicans will do what they usually do. The ones that it really didn't matter, who said 'I like Jack better,' they will be just as enthused for Perdue." Everhart said. "Then there will be those of us that say, any Republican is better than no Republican."

While Perdue and Kingston had spent more than $11 million combined on the race, Nunn was able to focus on fundraising and stockpiling her cash for the fall campaign. Nunn was expected to hit the road Wednesday, launching a four-day campaign tour.

During the primary, Perdue faced numerous attacks on his long career in the corporate world. National Democrats were quick to continue that theme by portraying him as a CEO who took massive compensation packages while presiding over layoffs and outsourcing.

"David Perdue has spent his career tearing apart companies and communities by slashing thousands of jobs in Georgia and across the country and outsourcing jobs to Asia, while walking away with millions for himself," said Guy Cecil, head of the Democrats' national Senate campaign office.

Perdue said he was prepared to defend his record.

"Now you've got two outsiders talking about Washington, and now you get down to the issues," Perdue said. "Let's talk about debt, the economy and jobs and who brings more value to that debate. Someone who has been running a philanthropy for 15 years or whatever, or someone who has been out here, not to go bragging, competing in the real world?"