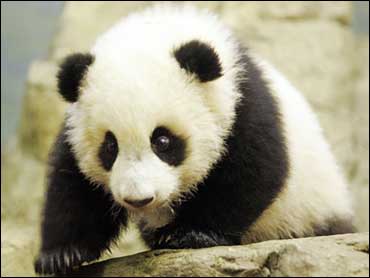 Tai Shan, the giant panda cub, showed Tuesday that he is a quick study, prancing about in his den and otherwise mugging for hordes of camera crews in this city that's a veritable fishbowl for celebrities.

More than 100 reporters and camera crews from around the world got their first look at the fuzzy creature as they filed past his indoor enclosure in five different shifts. And the 4½-month-old cub did not disappoint.

He chased his zoo keeper around, trying to nibble at the hems of her jeans. He pulled himself over the ledge of the habitat's rocky centerpiece. He tumbled onto his back, and he gummed at the bamboo stalks that will someday form his diet.

Cameras snapped wildly every time he did something especially cute.

The news preview followed special viewing sessions for members of the zoo's support organization, Friends of the National Zoo, and other financial backers.

What the AT&T-T-Mobile breakup means for you

Q&A: Electronic Health Records And You

The cub gets his first visitors from the general public Dec. 8, when those who nabbed tickets during the zoo's online ticket giveaway are permitted in the panda house. Those 13,000 tickets were exhausted about two hours after they became available last week.

Zoo officials announced that people could only use the tickets that they can prove they reserved themselves after the tickets started showing up on eBay for hundreds of dollars apiece.

The visits aren't just planned to satisfy the public's demand to see the panda, officials said. They also give the cub a chance to get used to having people around.

Panda curator Lisa Stevens tells The Early Show co-anchor Julie Chen Tai Shan will return to China when he is 2 years old. All cubs born in the United States must return in this time frame, according to the formal loan agreement.

"He is part of a major breeding program to maintain a healthy population of this endangered species in captivity," Stevens says. "At 2 years of age, decisions will be made on where he should go to benefit the breeding population."

Tai Shan (pronounced tie-SHON) means "peaceful mountain." The name, one of five proposed for the cub, received 44 percent of an estimated 200,000 votes cast on the zoo's Web site.

Tai Shan now weighs 21 pounds, two pounds more than he did just one week ago. He won't be weaned off mother Mei Xiang's milk for another year or so.