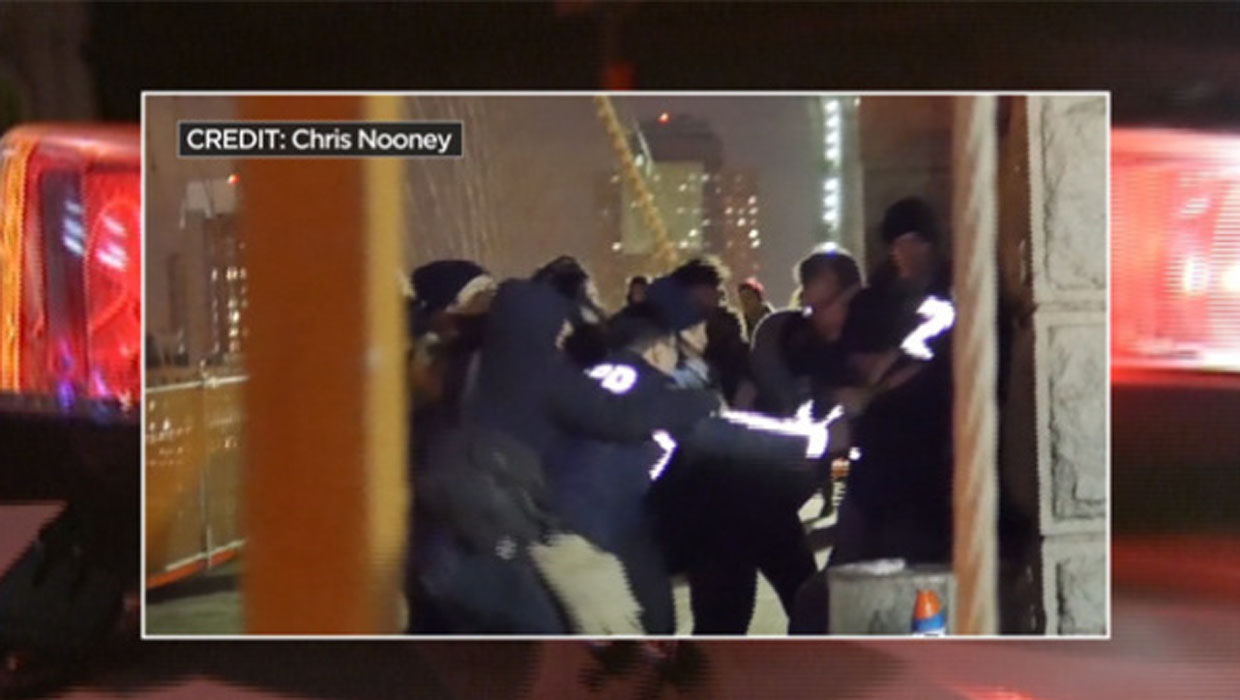 NEW YORK - One of the suspects being sought in connection with the assault of two NYPD lieutenants during an Eric Garner protest on the Brooklyn Bridge has turned himself in to police, sources tell CBS New York.

No charges have been filed, but the source told the station that the man is in custody and being questioned by police.

Police have been looking for four men and three women caught on camera struggling with the two lieutenants during a clash between police and protesters on the Brooklyn Bridge on Saturday.

The station reports that police say the incident began when Baruch College professor Eric Linsker, 29, tried to throw a metal garbage can over the bridge railing at officers. Police said the other suspects charged at them while they tried to arrest Linsker.

"It's a two minute period that goes by where there are individuals punching and kicking our two lieutenants," NYPD Chief of Manhattan Detectives William Aubry said. "Linsker clearly is resisting and there is video evidence that he does throw a punch."

NYPD lieutenants Philip Chan and Patrick Sullivan were injured, with Chan suffering a broken nose and both men sustaining bruising all over their bodies, police said.

The station reports that police said two of the men were in the group were the key aggressors and face felony charges of assaulting a police officer. The other five were expected to face lesser charges.

Police are offering a $12,000 reward for any information leading to the arrest and conviction of the suspects.

Anyone with information about the suspects or anyone who has additional cell phone photos or videos is asked to contact Crime Stoppers at 800-577-TIPS (8477), visit the Crime Stoppers website or text tips to 274637 (CRIMES) then enter TIP577. All calls are strictly confidential.