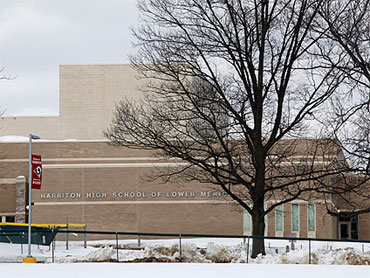 There's no evidence a suburban school district used school-issued laptops to spy on students despite its questionable policies and its lack of regard for students' privacy, according to a report issued Monday by attorneys hired by the district.

Concerns about an online chat captured in a screen shot of a school-issued computer led to public disclosure of the Lower Merion School District's laptop tracking program, according to the report by the Philadelphia law firm Ballard Spahr, which was presented at a meeting of the school board Monday night. The firm recommended a ban on remote activations of webcams and remote capturing of screen shots from computers issued to students.

Harriton High School student Blake Robbins and his family alleged privacy violations over webcam images taken at home without their knowledge and sued the district, which said it secretly activated the webcams only to find missing laptops but admitted lax policies led it to capture 58,000 images.

The report says Robbins turned in his laptop with a broken screen and was issued a loaner on Oct. 20, but school officials quickly moved to retrieve it due to outstanding insurance fees. So the tracking program was activated from Oct. 20 to Nov. 4 and captured 210 webcam photographs and 218 screen shots, the report said.

Although a technician confirmed on the first day of tracking that the laptop was "now currently online at home," another official in the same department instructed him to keep the tracking on and later told investigators he thought he needed authorization to terminate it, the report said.

On Oct. 30, the report said, a technician saw a computer screen shot that "included an online chat that concerned him." After consulting with a superior, he allowed school officials to look at the images.

Although the school principal said none of the images should be discussed with Robbins or his parents because they involved off-campus activities, Vice Principal Lindy Matsko decided about a week later it was "appropriate to discuss certain seemingly troubling images" with them, the report said.

Robbins family attorney Mark Haltzman told reporters at the meeting that he and his clients were "thankful that we've been vindicated ... about all the misuse going on," but he added he was concerned that the full story had not yet been revealed. School district lawyer Henry Hockeimer declined to comment on what was in the online chat or images that concerned school officials, citing the pending litigation. The report notes Robbins "was not disciplined as a result of any images captured from his laptop."

The report says the LANrev TheftTrack system was activated 177 times during the 2008-09 and 2009-10 school years but 101 activations involved only the IP address tracking feature and resulted in no captured images.

As of Feb. 23, when the system was shut down, there were 30,564 webcam photographs and 27,428 screen shots in the systems of the district's Information Services department. About 87 percent of the images recovered, however, resulted from failure to deactivate the features on a dozen laptops after they were found or recovered, the report said.

The collection of images stemmed not from an effort to spy on students but from "the district's failure to implement policies, procedures and recordkeeping requirements and the overzealous and questionable use of technology by IS personnel without any apparent regard for privacy considerations or sufficient consultation with administrators," the report said.

The report also criticized leaders and several members of the IS department as "not forthcoming with the Board, administrators and students about what TheftTrack could do and how they used it," citing incidents demonstrating "an unwillingness ... to let anyone outside of the IS Department know about TheftTrack's capabilities."

Many of the photos show students in school, and others show walls or empty or dark rooms. Others, however, show students and family members or other people in their homes and elsewhere, but none contained nudity.

The report said the tracking system was intended to help recover stolen computers and the district used it successfully for that purpose. But it said the district also used the system for missing computers and for unknown purposes and left it activated for long periods in cases "in which there was no longer any possible legitimate reason" for capturing images. The report faults administrators who had information about the program with not having appreciated the privacy concerns raised.