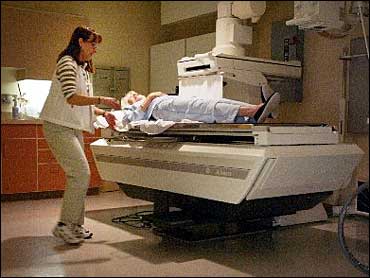 Medicare patients are getting better treatment than they did just a few years ago for such ailments as heart attacks, pneumonia, breast cancer and diabetes, but the quality of care still varies widely by region and state, a government report card says.

The proportion of Medicare patients receiving appropriate care increased from 69.5 percent to 73.4 percent. On average, states improved on 20 of 22 quality indicators.

Among the biggest gains were those made in the percentage of heart attack patients being sent home from the hospital with prescriptions for beta blocker drugs; that figure rose on average from 72 percent to 79 percent.

Another notable improvement was in the percentage of Medicare patients receiving pneumococcal vaccines — up from 55 percent to 65 percent.

Nonetheless, substantial numbers still are not getting the vaccine, which is recommended for adults 65 and older to prevent pneumonia, said study leader Dr. Stephen Jencks, director of the quality improvement group at the Centers for Medicare & Medicaid Services. The centers administer Medicare services for the nation's elderly.

"All you have to do is give the darn vaccine, you can give it any time of year, there isn't a shortage, and we're still not there," Jencks said. "Health care systems are still far too tuned to treating the acute illness rather than prevention."

The findings "are encouraging in showing that improvement is possible and is taking place," the authors said. "They should not lead to complacency: There is still a very long way to go, and medicine is changing at least as fast as our progress in implementing what was the standard of care just a few years ago."

The two measures that on average did not show improvement were the percentage of patients receiving ACE inhibitor drugs for heart failure and having blood cultures taken before receiving antibiotics for pneumonia.

States that fared the worst in the earlier study, mostly in the South, generally remained in the cellar, and those that fared the best remained at the top. New Hampshire and Vermont retained their No. 1 and No. 2 status. Louisiana, ranked 49th two years ago, dipped to worst among the states. Puerto Rico was ranked last in both reports.

The gaps that persisted in 2000-01 are evident on many measures, including the percentage of heart attack patients given aspirin within 24 hours of hospitalization. In New Hampshire and Vermont, it was 92 percent, compared with 85 percent in Louisiana and 70 percent in Puerto Rico.

Some have speculated that regions that fare poorly have a greater proportion of low-income, sicker patients, but the researchers said the reasons for the variations are unclear.

Dr. Ken Thorpe, chairman of health policy and management at Emory University, said some doctors may disagree with the so-called standard practice. For example, some may not think ACE inhibitors are the best treatment for heart failure patients.

Improvements have occurred because of a government push that began in the 1980s, said David Schulke of the American Health Quality Association. The group represents medical professionals who work with the government and the health industry to improve quality.

A recent Institute of Medicine report on the pervasiveness of medical errors nationwide helped spur the efforts, Schulke said.

But he added: "We really need to close the gap faster. Nobody's sitting around on their hands celebrating. There's much more to do."