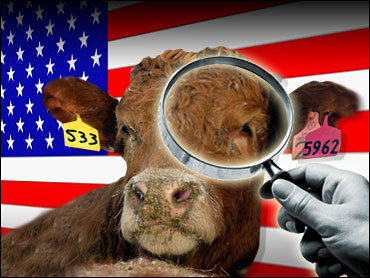 Government investigators say testing is too slow at times to prevent cattle from eating feed that might be contaminated, just one flaw they cited in a program to help stop mad cow disease from spreading.

"If FDA's testing program is not catching violations, and catching them in time, that needs to be corrected immediately," Harkin said.

The Food and Drug Administration disputed the findings, arguing that the report unfairly focused on a small component of broad government efforts to stop mad cow disease.

The only way mad cow disease is known to spread is through feed containing certain tissue from infected animals. Adding animal protein to feed is commonly done to speed growth, but the U.S. has banned cattle protein in cattle feed since 1997.

Run by the FDA, the feed testing program is a small part of the government's campaign to keep mad cow disease out of the food chain for animals and people.

The program has many weaknesses, according to GAO, the investigative arm of Congress.

In half the feed samples analyzed, FDA took more than a month to determine whether banned cattle protein was present. Cattle feed is eaten quickly after it is manufactured, and the feed may have been consumed before tests are finished, GAO said. The report examined 989 samples analyzed from August 2003 through June.

Investigators said the agency required no documentation of its reviews and that FDA officials were lax in overseeing the testing program.

The FDA said a timeframe for testing is not critical to minimizing cattle's exposure to potentially contaminated feed.

"FDA relies on its overall inspection program, rather than analytical methods alone, to enforce the feed ban," agency officials wrote in a response included in the GAO report. FDA also inspects feed mills and other firms subject to the feed ban.

In an earlier report, the GAO said the FDA admits there are more companies involved in cattle feed than the 14,800 firms it has inspected, but that it has no uniform method for identifying additional ones. The FDA also has not re-inspected nearly a fifth of the companies within the past five years.

Mad cow disease, the common name for bovine spongiform encephalopathy, or BSE, has been found in more than two dozen countries, including the United States.

Eating meat products contaminated with infected tissue is linked to a rare, fatal illness, a variant of the Creutzfeldt-Jacob Disease, that has killed more than 150 people worldwide. Most of the deaths were in Britain, where there was an outbreak in the 1980s and 1990s. One person died in the United States but was living in Britain during the outbreak.