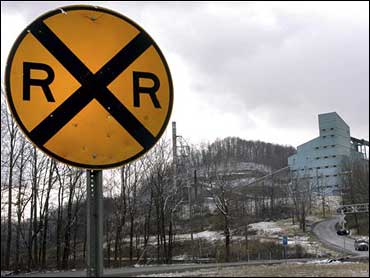 Two simultaneous lightning bolts likely caused an electrical current in a cable left deep inside the Sago Mine and touched off the methane blast blamed for the deaths of 12 coal miners last year, the federal Mine Safety and Health Administration said Wednesday.

Lightning is one of three "root causes" the agency cites in its long-awaited investigation into the Jan. 2, 2006, explosion at the International Coal Group Inc. mine in central West Virginia.

The report is the first time a conduit for the electrical charge has been mentioned. Electrical currents from a lightning strike could have traveled through the earth to the underground cable, which functioned like an antenna, the report said.

Previous reports by the company and the state pinpointed lightning as the cause but did not mention the route the charge took into the mine.

Also contributing to the blast: gas levels inside the sealed section of the mine were not monitored and seals used to close off the inactive section from the working mine were not strong enough to withstand the force of the blast, according to a copy of the report obtained by The Associated Press.

The relatives of several of the Sago victims bashed the report and its findings.

The explosion trapped a team of miners deep inside as they were preparing to resume production after the New Year's holiday. By the time searchers reached them about 40 hours later, only one man had survived in the carbon monoxide gas. Officials originally said fire boss Terry Helms died in the initial blast, but the report said Helms also died of carbon monoxide poisoning.

It was the highest-profile coal mining accident in recent U.S. history and led to sweeping changes in federal and state mine safety law. The company idled the Sago Mine in March because of high production costs and low coal prices.

MSHA issued 32 violations against ICG, but none were found to have caused the accident or contributed to its severity.

"How can they not be responsible," Campbell said of the violations against ICG.

At the time of the explosion, federal regulations said mine seals had to withstand explosive forces of up to 20 pounds per square inch. MSHA has since changed the requirement to 50 psi. The report said the blast created forces of more than 93 psi.

Lightning has been considered the prime source of the explosion since ICG released its findings in March 2006. The state Miners' Health Safety and Training issued a report earlier this year that upheld that finding.

Ira Gamm, a spokesman for Scott Depot-based ICG, declined comment because he had not yet seen the latest report.

The United Mine Workers union, which participated in the state and federal investigation, issued its own report, offered a dissenting viewpoint: Its experts believe the spark came from friction in the mine's deteriorating rock roof and the metal support system used to hold it up.

The mine is nonunion.

"Given the history of the roof conditions in that mine, I believe that's what happened," said Sara Bailey, whose father, George Junior Hamner, died in the mine.

"I don't believe MSHA and I don't trust MSHA and I think they are a disappointment to our nation's coal miners," Bailey said after walking out an hour into what was expected to be a three-hour briefing Wednesday. Mine Safety and Health Administration chief Richard E. Stickler and lead investigator Richard Gates met privately with the victims' families and surviving miner Randal McCloy Jr. at West Virginia Wesleyan College to discuss the report.

"It's all theories still. We wanted to hear something that was official, something that was honest," she said. "You can probably go through this whole book and still not get an answer," Brusso said, patting the report that she carried under one arm. "Lighting didn't kill our guys. They were in there but the lightning didn't kill them. It was the rescue, the equipment, the whole breakdown of the system."

In its report, MSHA said it considered other potential causes, but lightning "has been determined to be the most likely ignition source."

Atmospheric alarms in the mine sounded at nearly the same instant as a documented lightning strike, at 6:26 a.m. on Jan. 2, 2006. But the United Mine Workers — which was allowed to legally represent some workers at the nonunion mine — dismissed the lightning theory as "so remote as to be practically impossible."

The UMW argued that unlike other coal mine blasts linked to lightning, there was no metal conduit at Sago that could have carried the charge for two miles into the mine to the point of the explosion.

The National Lightning Detection Network recorded two lightning strikes within a split second of each other that morning. One strike was one mile south of the mine's opening and the other was one mile to the north.

"During a lightning strike, the insulated conductors of the submerged pump cable could receive volts as high as 20,500 volts," the report said. "This voltage would be of a short duration that the energy generated would be adequate to cause an arc and ignite methane."

The report noted that the 1,300-foot-long cable ran to a submersible pump that had been used in the mine. It appeared the company had tried to remove the cable before sealing the abandoned section of the mine.

Such underground cables can serve as an antenna to lightning strikes hitting the surface. If a cable is frayed, the damaged areas would "act like fuses and burn apart, causing an arc," the report said.

Union President Cecil Roberts said the report shed some important light on the explosion, but MSHA's lightning theory is "far-fetched" and not supported by the physical evidence found and examined at the mine.

To safeguard mines from future lightning strikes, MSHA said all cables should be removed from areas before being sealed, the atmosphere inside sealed areas should be monitored and kept inert if the construct seal can't withstand the force of an explosion, and seals should be designed and built to withstand explosions.