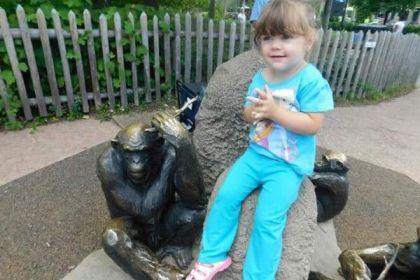 SUMPTER TOWNSHIP, Mich. – A Michigan medical examiner called the killing of a 4-year-old girl found burned the "worst child death case" he has seen in his 27 years of practice, according to court documents obtained by the Detroit Free Press.

The death of Gabrielle Barrett on Jan. 1 launched a national manhunt for her mother, 24-year-old Candice Diaz, and the mother's boyfriend, 28-year-old Brad Fields, which ended with the couple's arrest by U.S. Marshals Tuesday in southern Georgia. Both Diaz and Fields were charged in an arrest warrant approved by the Wayne County Prosecutor's Office with murder, child abuse and torture, CBS Detroit reported.

Fields is not the child's father, reports the Detroit Free Press.

Gabrielle, 4, was found Jan. 1 with severe burns and other injuries in their trailer home in Sumpter Township, southwest of Detroit. Officers responded around 10:45 a.m. to a report of an unresponsive 4-year-old girl at the home.

Upon arrival, CPR was being administered by family members and officers found the child suffering from what police described as "severe burns about her extremities," the station reports.

The girl was transported to an Ann Arbor hospital where she was pronounced dead.

The death was ruled a homicide two days later by the Washtenaw County Medical Examiner, according to police, with evidence of multiple traumatic injuries indicating child abuse.

The Detroit Free Press reports a court document that seeks to terminate the parental rights to the girl's 1-year-old half-sister reveals gruesome and disturbing details about Gabrielle's death. The document reportedly says the 4-year-old was burned so badly her big toe fell off, and said police found melted skin in the bathtub drain.

The document says Diaz gave a version of events to police, but refused to speak with child welfare workers, the paper reports. Diaz allegedly said the child ran her own bath water Dec. 31, causing burns to her skin, but the woman didn't seek medical care. She said the girl wanted to take another bath the following day.

She claimed she left the girl in the tub and went to make pancakes, and later found the girl submerged in the water up to her nose. She said she pulled the child out of the bath and the child vomited.

911 wasn't called until 36 minutes later, the documents says, though it's not clear who called.

"Gabrielle had burns all over her body and bruising to her entire body," said the document, filed Jan. 3 in the Lincoln Hall of Justice in Detroit and obtained by the paper.

The document says the Michigan Department of Health and Human Services wanted to remove Gabrielle's 1-year-old half-sister from the home because of "improper supervision and physical abuse resulting in a child death," the paper reports. A court ruled in their favor.

The document says the couple both suffer from "severe mental illnesses for which they admit they are not treating." Cocaine was also found in the home, according to the Free Press.

The state health and human services department is prohibited by privacy laws from revealing whether the family had any previous contact with child welfare officials, the paper reports. CBS Detroit reports that Sumpter Township police chief Eric Luke said his department had previously responded to the home in May of 2016 to find it filthy and full of drugs and weapons, but that Gabrielle wasn't living there and had been living with her grandmother in another jurisdiction. The younger child wasn't yet born and there were no other children in the home, Luke said.

In custody in southern Georgia, Diaz and Fields on Thursday waived extradition proceedings.

The Wayne County prosecutor's office said the pair could be returned to Michigan in two to three weeks to face their charges.