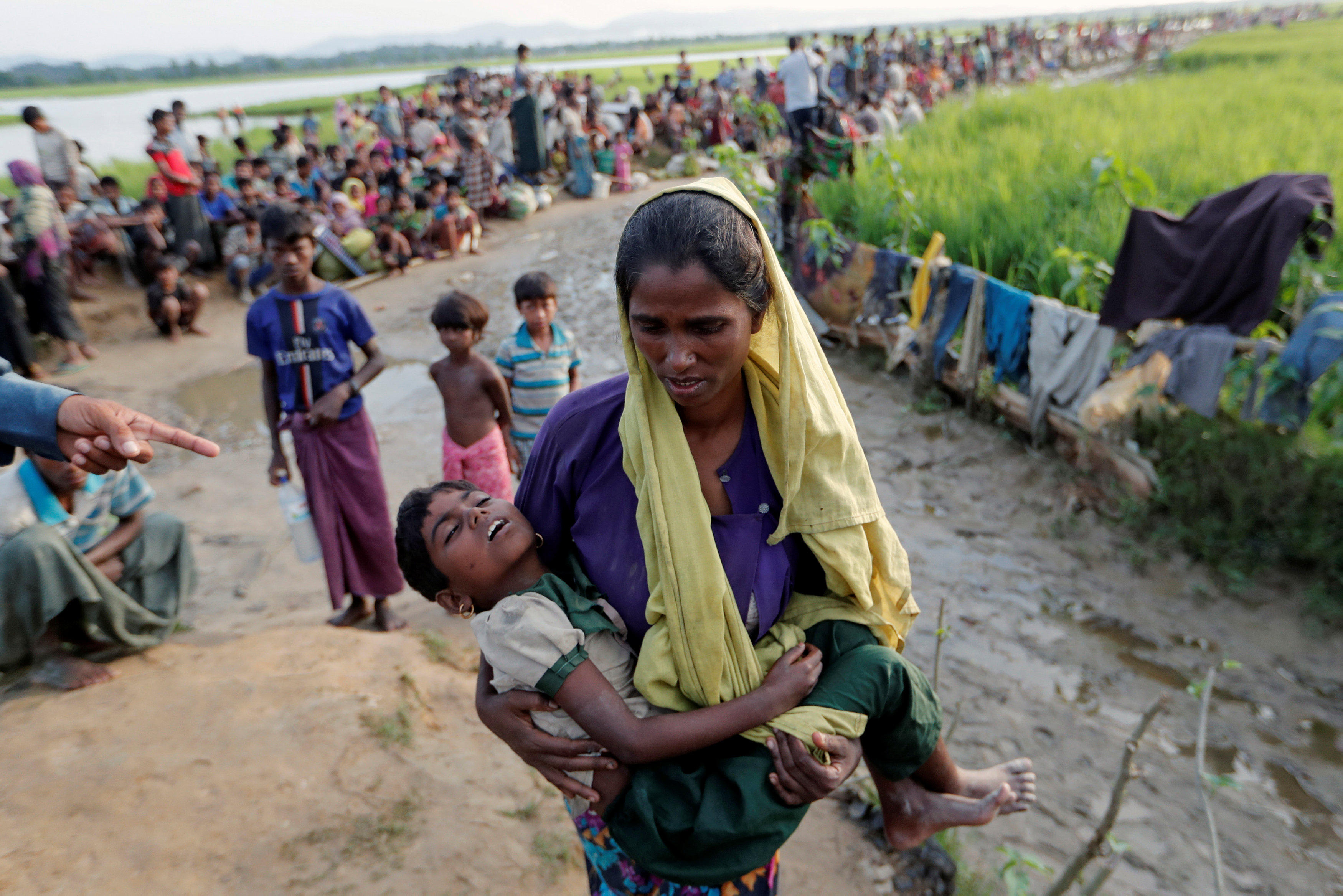 After a year of investigation on the ground, a new report  says that there is "mounting evidence" that points to a genocide against Rohingya Muslims in Myanmar, and it says that Burmese Army soldiers, police and civilians are responsible for the atrocities.

The report, published by the United States Holocaust Memorial Museum and the non-profit organization Fortify Rights, says close to 1 million Rohingya have been forced to flee their homes.

"The Rohingya have suffered attacks and systematic violations for decades, and the international community must not fail them now when their very existence in Myanmar is threatened" said Cameron Hudson, Director of the Simon-Skjodt Center for the Prevention of Genocide at the U.S. Holocaust Memorial Museum. "Without urgent action, there's a high risk of more mass atrocities."

The report, titled, "They Tried to Kill Us All": Atrocity Crimes against Rohingya Muslims in Rakhine State, is based on more than 200 in-depth, in-person interviews. Fortify Rights, which investigates human rights violations in Southeast Asia, spoke with survivors and international aid workers along the Myanmar-Bangladesh border.

"They tried to kill us all," said "Mohammed Rafiq, 25 years old and the source of the title of the report. He's from Min Gyi village in Maungdaw Township, and he told investigators that in August, soldiers corralled villagers in a group and then opened fire on them.

"There was nothing left," he said. "People were shot in the chest, stomach, legs, face, head, everywhere."

The report documents widespread and systematic attacks on Rohingya civilians from October to December in 2016 and also from August 25, 2017 until the present. The beginning of the mass atrocities stemmed from an attack carried out by an unknown Rohingya militant group against Burmese police outposts in March and August of 2017. The militants were reportedly angry about the discriminatory treatment of Rohingya Muslims. These attacks prompted the Myanmar Army to launch "clearance operations" which the report describes as "the military uses to describe ongoing multiagency efforts to combat and apprehend Rohingya militants."

But those so-called "clearance operations" were effectively just a mechanism for visiting mass atrocities on massive numbers of Rohingya men, women and children, the report concludes.

Myanmar's military is denying accusations. This week, the military said it had interviewed thousands of people during a month-long investigation into the conduct of troops in Rakhine after the Rohingya attacks in August. It claims that security forces "never shot at the innocent Bengalis," and "there was no death of innocent people." (The Burmese widely refer to the Rohingya as "Bengalis," inherently claiming they have illegally migrated to Myanmar from Bangladesh.)

The UN has said this crisis is "textbook" ethnic cleansing and the UN security council has strongly condemned the violence. But the State Department maintains that the situation is a humanitarian crisis — the U.S. government still will not, at this time, use the terms "genocide" or "ethnic cleansing." Secretary of State Rex Tillerson visited Myanmar for the first time this week, where he met separately with Burmese leader Aung San Suu Kyi and Armed Forces Commander in Chief Min Aung Hlaing. He addressed the fact that the U.S. is still assessing what is happening on the ground.

"Whether it meets all of the criteria for ethnic cleansing, I think we continue to evaluate that ourselves.  I think this is the reason why an independent investigation would be very useful to help us understand not just who – who to hold accountable – but also why – what were the motivations behind what occurred," Tillerson told reporters while he was in Myanmar.

The definition of genocide is an intentional targeting of a community with the goal of its complete destruction. This report concludes that this is the case in Myanmar.

"The facts laid out in this report demonstrate that state security forces targeted the Rohingya group with several of the enumerated acts in the law of genocide," the report says, and it characterized the situation on the ground as the fastest-growing outflow of refugees from a country since the Rwandan genocide.

The crimes catalogued on the ground include the killing by Burmese soldiers of men, women, and children in cruel and graphic ways. The report describes the throwing infants into fires and slitting of Rohynga Muslims' throats. Investigators also documented cases of mass rape and gang rape.

"These crimes won't end on their own," said Matthew Smith, the CEO of Fortify Rights. "People of conscience in Myanmar need to do everything possible to end the abuses and culture of impunity in the country."

Tillerson has said "someone is going to be held to account," should the reports turn out to be true. The State Department would like to see the violence end, so that the Rohingya Muslims can return home.

The deep-seated divide between the Myanmar government and the Rohingya, however, will not be easy to resolve. The country has long clamped down on the Rohingya's freedoms, even affecting their marriage and childbirth. Further, the Rohingya Muslims have been denied legal citizenship by the majority Buddhist culture in Myanmar.