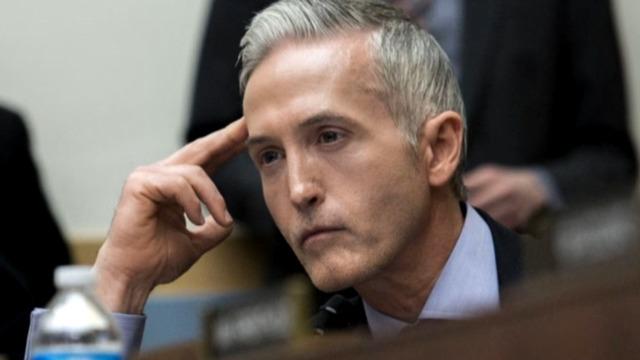 "We are directing inquiries to people that we think have access to information we don't have. You can call it official. You can call it unofficial. Those words don't mean anything to me. What means something to me is I'm going to direct questions to the FBI that I expect them to answer," said Gowdy.

Gowdy said that Congress "definitely has a role" in probing just how Porter was able to conduct work in the West Wing, including handling top secret information and documents, while only maintaining an interim security clearance.

He said he also wants answers from the FBI in the form of a briefing in order to develop a list of witnesses. He says many questions have since arisen after FBI director Christopher Wray's testimony on Capitol Hill on Tuesday offered a stark contrast in timelines of Porter's clearance process and when exactly the White House discovered the allegations of domestic abuse against him. Some of those questions he'd like to direct to the White House counsel and to the White House chief of staff.

"I would want to know from Don McGahn and General Kelly and anyone else -- what did you know? From whom did you hear it? To what extent did you hear it? And then what actions, if any, did you take," said Gowdy.

"The chronology is not favorable to the White House. When you have the head of the FBI saying we told you three times in 2017 and once more in 2018 for good measure, then I think the really fair questions are what were you told, by whom were you told it, did you have some reason to question what the bureau told you and if none of that is true, why did you keep him on?" Gowdy continued.

On Wednesday, Gowdy sent formal letters to both Wray and Kelly requesting information about interim clearances and how they were handled in Porter's case. Gowdy has requested the formation be sent to the committee no later than February 28.

Beyond the questions about Porter's security clearance, though, Gowdy is concerned about the fundamental question of Porter's hiring.