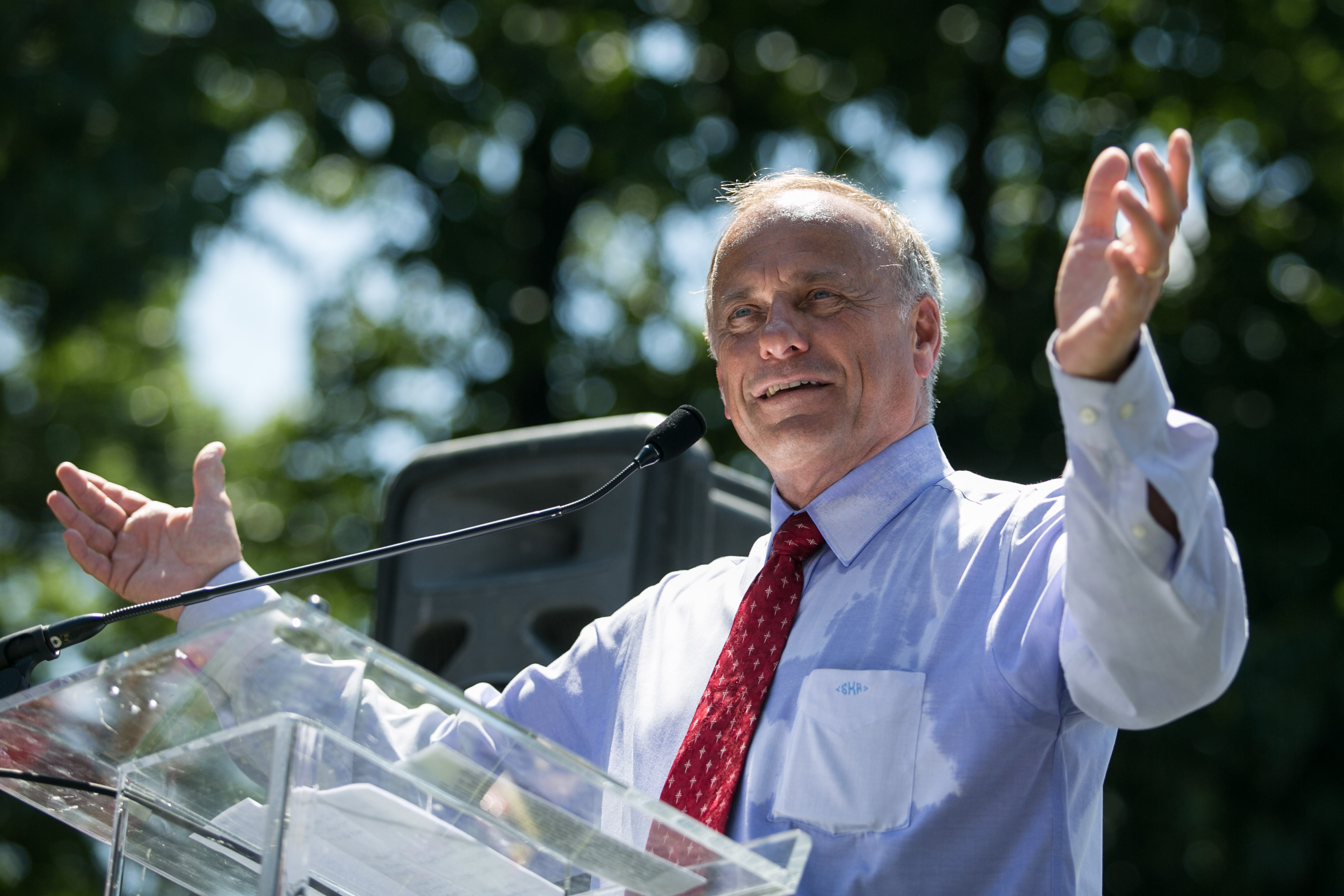 Rep. Steve King, R-Iowa, refused to back down from his recent controversial comments about immigrants smuggling drugs Sunday on NBC's "Meet the Press," sparking a heated confrontation between the congressman and Republican strategist Ana Navarro.

In a July interview with a conservative website, King waved away the argument that many undocumented immigrants are high-achieving students, and should therefore be given a path to citizenship, saying that for every valedictorian who's legalized, "there's another 100 out there that weigh 130 pounds and they've got calves the size of cantaloupes because they're hauling 75 pounds of marijuana across the desert."

When NBC's David Gregory pointed out that his remark had been debunked because there's no way to know for certain how many valedictorians or drug smugglers would be legalized, King stood his ground.

"My numbers have not been debunked," he said. "I said valedictorians compared to people who would be legalized under the act that are drug smugglers coming across the border. My characterization was exclusively to drug smugglers."

"What's their number?" King asked of those who have condemned his remarks. "How many valedictorians do they suggest? And I'll tell you, I've seen the drug smugglers."

King's refusal to walk back his remarks drew the ire of GOP strategist Ana Navarro, who was participating in a panel discussion on the show.

"I think Congressman King should go get some therapy for his melon fixation. I think there might be medication for that," she said. "I think he's a mediocre congressman with no legislative record and the only time he makes national press is when he comes out and says something offensive about the undocumented or Hispanics."

Navarro said King had helped the debate by forcing Republican leaders to condemn his remarks. House Speaker John Boehner, R-Ohio, for one, said King's assertion was "deeply offensive and wrong."

King fired back, insisting his remarks had been twisted: "First of all, I spoke only of drug smugglers."

He then appeared to question Navarro's facility with the English language: "And if Ana understands the language, she should know that. I didn't insult her or other Republicans."

Navarro, an American citizen who was born in Nicaragua before emigrating to the United States in 1980, responded, "I'm not undocumented, Congressman. I vote."

Still, King held fast. "There are people in America who are dying today because of our immigration policy," he said. "We need to secure the border first, restore the rule of law, then we can have this discussion that you want to get to. Let's not be insulting people in the process."

Navarro, brimming with incredulity, replied, "You're going to talk to me about insulting people, Congressman?"

The spat between Navarro and King crystallizes what is perhaps the biggest unresolved question about the future of comprehensive immigration reform: Will the Republican Party be able to muster enough support among its warring factions to push a bill through the House of Representatives and begin conferring with the Senate on final passage?

President Obama himself shifted the onus onto the GOP in a Friday press conference, saying the only thing standing between his desk and an immigration bill is internal Republican caucus politics.

On one side of the GOP divide are Republicans like Sen. John McCain, R-Ariz., and Rep. Paul Ryan, R-Wisc., who have warned their party that it risks becoming a permanent minority by opposing immigration reform, a cherished priority of the fast-growing Hispanic voting bloc.

Others, like King and Rep. Louie Gohmert, R-Texas, disagree, saying many of the reform proposals are simply bad policy prescriptions that would do nothing to improve the GOP's standing among voters.

Gohmert said on ABC's "This Week" that he would be open to having a discussion about broader reform proposals, but only after the border was certifiably secured. "I think most everybody in our party would vote for an immigration reform bill once they can be sure the boarder is secure," he said. "I support securing the border, and until then, I don't think we ought to be talking about who gets legalized."

House Republican leaders have said they will approach immigration reform incrementally, passing legislation step-by-step rather than putting together a comprehensive bill as the Senate did.

Gohmert cheered that approach: "What I've learned in my eight years - when you hear the word comprehensive, whether it's Republican or Democrat, it means we have got a lot of bad laws to passed, but we can't do it unless we have a really big bill."

It is unclear, however, whether a series of small bills could feasibly go to a conference committee with the Senate, where the two chambers would merge their respective pieces of legislation. It is also unclear whether Republican leaders in the House would schedule a vote on the final product of conference negotiations if it did not have the support of a majority of the Republican caucus.

In a recent interview with KNPR radio, Senate Majority Leader Harry Reid, D-Nev., seemed bullish about the chances of passing immigration reform if the two chambers can make it to a conference committee. "If we go to conference, we would win," he predicted.

An earlier version of this story misidentified Navarro's country of origin as Guatemala.