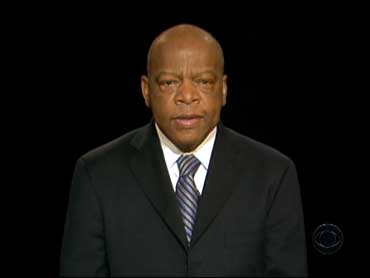 House Democrats heard it all Saturday - words of inspiration from President Obama and raucous chants of protests from demonstrators. And at times it was flat-out ugly, including some racial epithets aimed at black members of Congress and gay slurs directed toward one of Washington's openly gay lawmakers.

Most of the day's important work leading up to Sunday's historic vote on health care was being done behind closed doors. Democratic leaders cajoled, bargained and did what they could to nail down the votes they will need to finally push Mr. Obama's health care overhaul bill through the House.

But much else about the day was noisy, emotional and right out in the open. After more than a year debating the capstone of Mr. Obama's domestic agenda and just hours to go before the showdown vote, there was little holding back.

The tone was set outside the Capitol. Clogging the sidewalks and streets of Capitol Hill were at least hundreds - no official estimate was yet available - of loud, furious protesters, many of them tea party opponents of the health care overhaul.

Rep. Andre Carson, D-Ind., told a reporter that as he left the Cannon House Office Building with Rep. John Lewis, D-Ga., a leader of the civil rights era, some among the crowd chanted "the N-word, the N-word, 15 times." Both Carson and Lewis are black, and Lewis spokeswoman Brenda Jones also said that it occurred.

"It was like going into the time machine with John Lewis," said Carson, a large former police officer who said he wasn't frightened but worried about the 70-year-old Lewis, who is twice his age. "He said it reminded him of another time."

Kristie Greco, spokeswoman for Democratic Whip Jim Clyburn, D-S.C., said a protester spit on Rep. Emanuel Cleaver, D-Mo., who is black and said police escorted the lawmakers into the Capitol. Cleaver's office said he would decline to press charges, but Sgt. Kimberly Schneider of the U.S. Capitol Police said in an e-mail later: "We did not make any arrests today."

"I heard people saying things today that I have not heard since March 15, 1960, when I was marching to try to get off the back of the bus," Clyburn told reporters.

Rallies outside the Capitol are typically orderly, with speeches and well-behaved crowds. Saturday's was different, with anger-fueled demonstrators surrounding members of Congress who walked by, yelling at them.

"Kill the bill," the largely middle-aged crowd shouted, surging toward lawmakers who crossed the street between their office buildings and the Capitol.

The motorcade that carried Mr. Obama to Capitol Hill to whip up support for the bill drove past crowds waving signs that read "Stop the spending" and "Get your hands out of my pocketbook and health care." Many booed and thrust their thumbs down as Mr. Obama rode by.

As police held demonstrators back to clear areas for lawmakers outside the Capitol Mr. Obama's speech, some protesters jeered and chanted at the officers, "You work for us."

Inside House office buildings, protesters made their views known by visiting lawmakers' offices and chanting at legislators walking by.

Among the demonstrators was Delane Stewart, 65, of Cookeville, Tenn., who had come with her husband, Jesse.

"You know what's coming next if this happens?" she said, referring to the health bill's passage. "They're going to come after gun control."

"My concerns are about the health care bill, and the direction it takes us is toward communism, quite frankly," he said.

At a daylong meeting of the House Rules Committee, members of both parties squeezed into a tiny hearing room traded accusations in a session that was often a shouting match.

Rep. Joe Barton, R-Texas, said a tricky voting procedure Democrats had been contemplating "corrupts and prostitutes the system" and would "unleash a cultural war in this country."

Mr. Obama's Capitol Hill visit was the day's emotional peak for House Democrats as he sought to energize them to finally approve the legislation.

He conceded that it could be tough for some to vote for the bill, but predicted it would end up being politically smart because once it becomes law people will realize they like its provisions like curbs on insurance companies.

"It is in your hands," the president said in what Clyburn later called the best speech he'd ever heard Mr. Obama make. "It is time to pass health care reform for America, and I am confident that you are going to do it tomorrow."