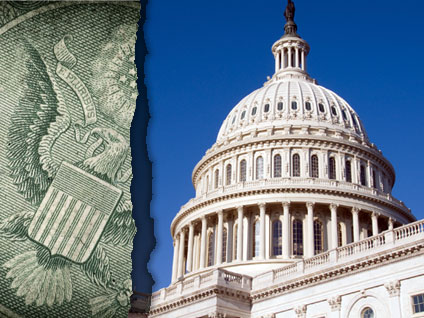 Rep. Jan Schakowsky (D-Ill.) said today her plan could reduce the deficit by $427.75 billion in 2015, surpassing the president's $250 billion target, without burdening the middle class -- something the commission leaders' plan failed to do, she said. Her plan includes proposals to raise taxes and modify Social Security without changing the benefits it pays out, among other things. It also calls for a $200 billion stimulus investment, which would lower the plan's impact on the deficit, but Schakowsky argues it would have long-term beneficial effects.

The plain laid out last week by commission co-chairs Erskine Bowles and Alan Simpson "would have serious consequences for lower and middle class Americans, and that is why I cannot support it," Schakowsky said today. "The middle class did not benefit from the Republican economic policies that led to the current deficit - they were the victims. They should not be called upon to pick up the tab."

The commission, which President Obama created by executive order, is charged with approving of a plan by Dec. 1 and send it to Congress for a vote. In order for the plan to move to Congress, however, 14 of the 18 commission members must agree to it, which seems unlikely given the largely negative reaction to the plan from Simpson and Bowles.

That initial draft called for some tax increases, such as a federal gas tax, as well as cuts to Social Security and Medicare.

Schakowsky's plan has some ideas in common with the original plan, such as suggestions to cut agriculture subsidies, as well as to cut the Pentagon budget by more than $100 billion. The congresswoman's plan would achieve defense spending cuts by cutting unnecessary weapons systems, reducing troop levels and other measures.

Her plan also calls for imposing more taxes on companies that outsource jobs and raising revenue in certain ways, such as letting the Bush tax cuts expire for the wealthiest Americans and treating capital gains and dividends as regular income.

With respect to Social Security, Schakowsky said today it made no sense to scale back the program.

"Addressing the Social Security issue as part of the deficit question is like attacking Iraq to retaliate for the 9/11 attacks," she said. "There is simply no relationship between the two and attempting to conflate them does a grave disservice to America's seniors."

Schakowsky's plan attempts to ensure the program's solvency by eliminating the cap on the payroll tax for employers and lifting the threshold above the current $106,800 for employees. It would also impose a "legacy tax" on earnings above the cap.

Her plan also includes a $200 billion, two-year stimulus investment in measures to create jobs and spur economic growth, such as extensions of the Supplemental Nutrition Assistance Program (the federal food stamp program).