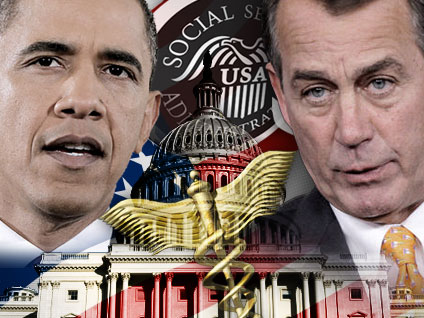 Republicans' triumphant return in last week's midterm elections gives the party a mandate to reduce government spending and bring the nation's spiraling deficits and debt under control, many conservatives have argued in recent days.

One day after Election Day, Republican Rep. Marsha Blackburn (Tenn.) went on MSNBC to offer a dizzying sample of agenda items Republicans should undertake to answer the will of the people: Voters "want a smaller government," she said. "They want to see these tax cuts extended, they want the spending stopped, they want the deficit and the debt addressed. You also have them wanting to see the health care bill repealed."

Nevermind that some of these goals conflict with one another.

Meanwhile, confounded by a Republican message that seems to resonate with voters, Democrats have tried to integrate deficit reduction into their own agenda. The White House has called reducing the deficit a top priority for 2011, and President Obama reiterated on CBS' "60 Minutes" Sunday night that Washington must "start making some tough decisions about how do we pay for those things that we think are important."

"60 Minutes:" Obama On The Political Price of The Election
Obama and the GOP Prepare for the 2012 Fight
60 Minutes Overtime: The Full Obama Interview

The president went so far as to seemingly suggest he could beat Republicans at their own game: "We're gonna have to, you know, tackle some big issues like entitlements that, you know, when you listen to the Tea Party or you listen to Republican candidates they promise we're not gonna touch," he said.

Republicans say they were elected to cut deficits, but some, like Blackburn, have put forward contradictory goals with few ways to achieve them. Meanwhile, Democrats attempted to cut the deficit through the health care reform law, but they have watched that effort turn into a political mess. Now, the party can't even unite around the president's position on the Bush tax cuts.

The reality is that significantly cutting back government spending is difficult, practically and politically. Politicians are exceedingly reticent to consider cuts to entitlement programs for fear of the wrath of voters, for example, yet 41 percent of the $3.6 trillion federal budget goes to Social Security and government health care programs like Medicare. They shy away from discussing cuts to defense, which eats up 20 percent of the budget. And much of the rest goes to significant programs like unemployment aid and road-building.

Both Democrats and Republicans insist they're determined to address the nation's soaring deficits, but fashioning a way to balance the budget that's palatable to voters may be easier said than done.

Angered by the sputtering economy and the Democrats' policies like health care reform, voters this year ushered into a office a set of Republicans with strong ideas about the limits of government spending. Senator-elect Rand Paul of Kentucky, for instance, said on ABC's "This Week" on Sunday that there should be federal spending cuts "across the board" and suggested possibly scaling back Social Security by raising the retirement age.

Similarly, on NBC's "Meet the Press" on Sunday, conservative Sen. Jim DeMint said, "We need to defund Obamacare and then we need to look at the entitlement programs." Yet sentences later, he said, "We're not talking about cuts in Social Security... We need to keep our promises to seniors, David, and cutting benefits to seniors is not on the table."

During the election, some Tea Party candidates (as Mr. Obama suggested on "60 Minutes") went so far as to campaign on their promise to preserve Social Security. Nevada Republican Sharron Angle ran an ad entirely devoted to Social Security, even using a term made famous by Al Gore during the 2000 presidential campaign -- "lock box."

"I'd like to save Social Security by locking the lock box, putting the money back into the trust fund so the government can no longer raid our retirement," Angle said in the ad.

The Republicans' mixed messages may not be surprising, given voters' conflicting sentiments. As many as 39 percent of voters in a CBS News Election Day exit poll said reducing the budget deficit should be the highest priority for the next Congress. Yet in a CBS News/New York Times poll conducted a few days earlier, an overwhelming seven in 10 Americans opposed reducing Social Security benefits for future retirees in order to keep Social Security afloat, and more than half said they opposed raising the retirement age to keep the program solvent.

Meanwhile, many Democrats, including the president, are just as aware that entitlement programs must be scaled back to achieve significant budget reductions, and that cuts to the programs would be politically dangerous.

Instead of addressing the issue head on, Mr. Obama and Democratic leaders in Congress have passed on the problem to the president's deficit commission, which is slated to give Congress a report with a series of suggestions for reducing the deficit on Dec. 1 -- conveniently during the lame duck session.

The bipartisan deficit commission (consisting of 18 members appointed by congressional Democrats, Republicans and the president) is expected to recommend ideas to scale back entitlements, like raising the retirement age -- a point that has raised the ire of the Democrats' liberal base.

While Democrats avoided basic congressional responsibilities like passing a budget in favor waiting for the deficit commission's report to come out, they continued to struggle this year with the issue of the Bush tax cuts, set to expire at the end of this year.

As the political environment worsened for Democrats this year, however, some grew cold feet at the thought of letting the tax cuts expire for the wealthy, for fear of being labeled a "tax hiker" by Republicans.

Senate Republican Leader Mitch McConnell explained the Republican point of view on CBS' "Face the Nation" on Sunday. "These aren't tax cuts; these are tax increases," he said. "Tax increases in the middle of a recession."

In the weeks leading up to the election, more moderate Democrats started siding with Republicans.

Now that they are in power, Republicans are signaling they will not compromise on the issue, and Mr. Obama suggested on "60 Minutes" that he may cede ground to the GOP on this issue.

While these few deficit-related showdowns still loom over Congress, Democrats have also failed to score any political points for what they say was their signature achievement in deficit reduction -- the health care reform law. And those efforts risk being erased by Republican promising to repeal it.

The nonpartisan Congressional Budget Office said that Mr. Obama's health care reform package could reduce the deficit by about $125 billion over the next 10 years, as well as cut the deficit by $1.2 trillion in its second decade. This was in part achieved by shrinking the Medicare budget by $500 billion over 10 years, a move that backfired with seniors who like the program and saw it at risk.

The president and his party thought they could fashion a bill that satisfied the public's interest in preserving government health care services while at the same time cutting costs. They were wrong: CBS News' Election Day exit poll showed that 48 percent of Americans want the health care law repealed.