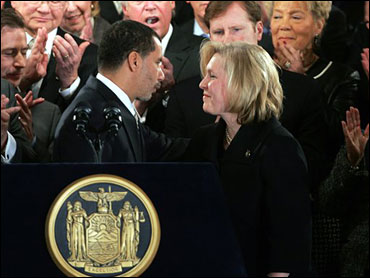 "For many in New York state, this is the first time you've heard my name and you don't know much about me," Gillibrand said at a ceremony in Albany. "Over the next two years, you will get to know me. And, more importantly, I will get to know you."

The appointment, which requires no further confirmation, came one day after Caroline Kennedy, daughter of President John F. Kennedy, abruptly withdrew from consideration.

Gillibrand, 42, had been considered one of the top contenders in Paterson's selection process, along with Kennedy and state Attorney General Andrew Cuomo. Gillibrand served as Cuomo's special counsel when he was housing secretary under President Clinton and she worked on Hillary Rodham Clinton's first Senate campaign in 2000.

Paying tribute to her predecessor, Gillibrand said: "I can't tell you how many times she has personally inspired me to action."

Paterson stressed that he didn't choose Gillibrand because she was a woman or from upstate New York. "I believe I have found the best candidate to become the next United States senator from New York," he said.

The appointment lasts until 2010, when a special election will be held to fill the final two years of Clinton's term. Clinton is now serving as secretary of state in President Barack Obama's administration.

Kennedy called the governor around midday Wednesday and told him she was having second thoughts about the job, according to a person close to Paterson, who said she later decided to remain in contention, only to announce her withdrawal early Thursday in an e-mail.

The New York Times reported Thursday that Kennedy dropped her bid because of problems involving taxes and a housekeeper that emerged during the vetting process.

U.S. Rep. Carolyn McCarthy, who wasn't among the 10 to 20 people Paterson said applied for the Senate appointment, immediately criticized the Gillibrand's selection. McCarthy, whose husband was killed by a gunman on the Long Island Railroad, said Gillibrand's support of more conservative issues such as gun ownership rights was out of step with most New York Democrats.

During the news conference, Gillibrand complimented all of the state's female House delegation, and offered an olive branch to McCarthy, who she said has "provided outstanding leadership in fighting against gun violence and keeping our children safe. I pledge to work with her on her signature bill for updating background checks to keep guns out of the hands of criminals."

Near the end of her statement, Gillibrand again brought up the issue again, saying she would support gun control "but also protect our hunters' rights."

Despite criticism from some corners, Gillibrand is a proven vote-getter in a largely rural eastern New York district that sprawls from the mid-Hudson Valley to north of Albany. She defeated a long-term Republican incumbent in 2006 and won re-election last year by a wide margin.

"Gender plus geography equals Gillibrand," said Doug Muzzio, a political science professor at Baruch College. He said her upstate base would help Paterson's 2010 ticket, which otherwise would be dominated by New York City residents like himself.

"On the minus side, she's an unproven statewide vote-getter, a conservative `Blue Dog' Democrat who could face a primary challenge in 2010 and face a tough general election," Muzzio said.

Paterson has said he hopes to avoid a party challenge to the appointment, saying he wants his choice to be good enough to hold the seat for a decade or more.

Gillibrand becomes the only woman on a ticket that will include Paterson, Cuomo, Comptroller Thomas DiNapoli and senior U.S. Sen. Charles Schumer.

The pick came after a week in which Kennedy surprisingly withdrew from consideration and Paterson revealed he was considering Cuomo, who had refused to publicly express his interest. In the end, Paterson chose the up-and-comer over more established names.
But Paterson has said the first task of a new U.S. senator should be bringing more aid in the federal stimulus package back to New York. It's uncertain that Gillibrand has the background or pull to do that.

This consideration, as the state faces a historic fiscal crisis, was considered a strength for Kennedy, who is close to President Barack Obama and may have been owed a favor for her early endorsement of him; and Cuomo, who has ties and experience in Washington as President Bill Clinton's former housing secretary.

Gillibrand was an official in the Housing and Urban Development Department during the Clinton administration. She worked as a lawyer before challenging Republican John Sweeney in 2006 to represent New York's 20th District. Her upset win came after a police report showing that Sweeney's wife had called 911 in what appeared to be a domestic violence incident was leaked shortly before the election.

In November, Gillibrand defeated wealthy General Electric heir Sandy Treadwell. The former state Republican chairman was seen as one of the Republican Party's best chances to capture a congressional seat in New York.

Gillibrand graduated from Dartmouth College in 1988 and earned a law degree at UCLA in 1991. She is the daughter of Albany lobbyist Douglas Rutnik.

"Yesterday afternoon in a very strange conversation, a source close to Governor Paterson called reporters, I was called, to give us three possible reasons why she did this," Dicker said. "This source said that she, Caroline Kennedy, had a tax problem, had a nanny problem, and that some questions had been raised about her marital situation.

"This was surprising because Caroline Kennedy had already taken herself out of the race. People were wondering, why pile on this person who's such an iconic figure within the Kennedy family?

Dicker characterized Paterson's replacement-selection process, in which sources within his office give contradictory news one day to the next, as a "disaster."

Dicker summed up his choice of Gillibrand: "A little-known congresswoman who's basically still a freshman, just starting her second term, from upstate Hudson, conservative-oriented, supported by the NRA which doesn't go over well with liberal Democrats.

"He wanted representation on the ticket he's going to run on next year because right now there isn't any.

"It may be two of the biggest blunders a governor of the state of New York has ever made," Dicker told Smith. "And the governor has damaged himself badly because he's not an elected governor - he succeeded Eliot Spitzer. He's got to run on his own next year - and angered the party and the Kennedy family. That's not good if you want to run in New York as a Democrat."