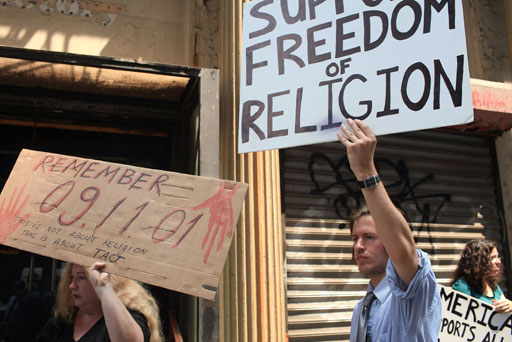 Renee Ellmers, who is trying to unseat Democratic Rep. Bob Etheridge in North Carolina, is out with an ad in which "the Muslims" and "the terrorists" seem to be used more or less interchangeably.

The ad is focused on the planned Islamic cultural center a few blocks from the former site of the World Trade Center.

In the spot, a narrator says, "After the Muslims conquered Jerusalem, and Cordoba, and Constantinople they built victory mosques. And, now, they want to build a mosque by Ground Zero. Where does Bob Etheridge stand? He won't say. Won't speak out. Won't take a stand." (Etheridge's spokesman says the congressman does not support the project.)

"The terrorists haven't won," she says. "And we should tell them in plain English: No, there will never be a mosque at Ground Zero."

Ellmers, who has been endorsed by Sarah Palin, is considered the underdog in the race. She was helped somewhat back in July when video surfaced of Etheridge seemingly hitting a camera being wielded by a self-identified studentwho approached him on the street asking questions.

Critical Contests: Interactive Map with CBS News 2010 Election Race Ratings Brian Montopoli is a political reporter for CBSNews.com. You can read more of his posts here. Follow Hotsheet on Facebook and Twitter.