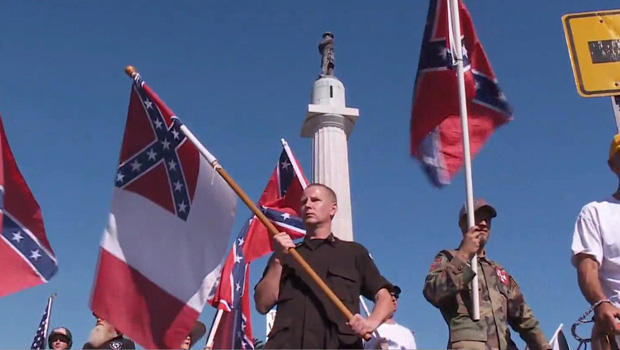 On Sunday about 700 protesters faced off in New Orleans, where several monuments are being removed, reports CBS News correspondent Michelle Miller.

The Big Easy's debate is one that's happening in other Southern cities. In this battle over history, heritage and race, the mayor of New Orleans has said that these statues put the Confederacy on a pedestal, and that is out of step with today's values of racial diversity and inclusion.

On one side of the debate: Those who want the city's Confederate monuments taken down, saying they are symbols of racism and white supremacy.

"The fight that we're waging is against the city fathers who have refused to bring about genuine equality and freedom for the black people here," said Malcolm Suber of the activist organization #TakeEmDownNOLA.

On the other side: Supporters of the monuments who argue they honor Southern heritage and history.

"We want it to stay," said Confederate statue supporter Michael Hill, president of the group League of the South. "We understand that most of us will only be here for a day, but it's a symbolic gesture of standing up for what we believe in."

The clash comes as the city plans to remove the statue of General Lee and two other Confederate monuments.

The first to go was the Liberty Place monument, which was removed in the middle of the night last month. Citing safety concerns, crews wore masks and bulletproof vests.

The removal sparked protests, including a violent clash near the statue of Jefferson Davis, who served as president of the Confederacy.

As the city plans to remove the remaining monuments, tensions are high. The New Orleans Police Department confirms multiple threats have been made toward contractors hired by the city to take down the statues.

The city of New Orleans says it is using private funding to take down the statues.

Officials say after they're removed, they'll be placed in storage and eventually relocated to a museum.