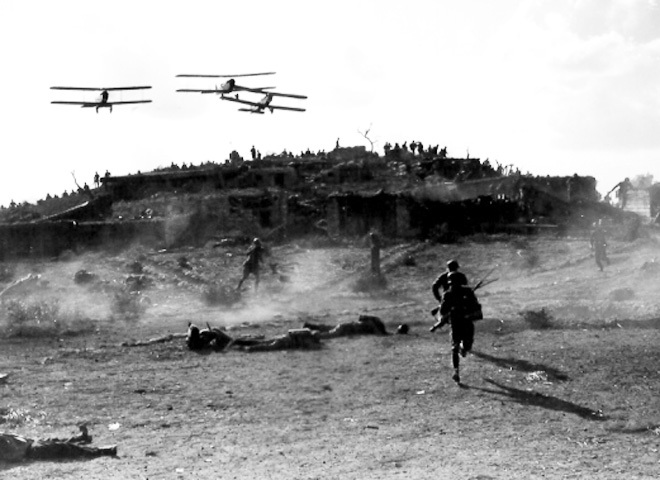 It soared, and roared . . . movie magic unlike anything America had ever seen. Paramount's 1927 World War I epic "Wings" had the usual aerial duels . . . and then came the unusual.

He recalled his father's words to the two male stars: "He said, 'I'm gonna do this right.' And he told Richard Arlen and Buddy Rogers, 'You're gonna take flying lessons and you're gonna fly the planes while you're being photographed.'"

The actors were up there with nothing but a camera and the blue sky!

They flew with barely a few hours training, and a button to turn on the mounted camera.

Wellman wanted it right because he was a fighter pilot in WWI. As a B-movie director after the war, he was an unlikely choice to helm the studio's big picture of that year.

Studio boss Jesse Lasky asked why Wellman thought he could do the job: "My father said, 'My war record does,'" said Wellman Jr. "'And I'll make you the best damn picture this studio's ever made.' And I think he did."

It was more than dives and dogfights. Clara Bow was the studio's top box office star of the day. Before "Wings," she starred in the film "It," giving rise to the term "It Girl."

Shapely and sensual, she hated her role as small-town girl and battlefield ambulance driver, with that modest military costume that came with it.

"She was constantly tightening the belt on the uniform to accentuate her curves," said producer and author David Stenn. "And the costume designer Edith Head was always chasing after her and try to get her to loosen the belt which she refused to do. And in the film you can see, [Bow] won."

Stenn wrote a book on Bow, who proved that sex sells. "There's a famous moment in the film where she appears briefly topless, and that brought many people into the theatre than perhaps would have gone without that scene," he said.

With her thick Brooklyn accent, Bow's career did not survive into the era of talkies.

But this new kid's did. Gary Cooper had one scene, and with only the power of his presence, a star was born.

But he turned out a blockbuster, rolling in money for the studio, running for years . . . and winning the very first Academy Award for Best Picture.

Paramount's main gate is one of the last original structures still on the movie studio lot from the time "Wings" premiered. Paramount was careful to preserve it over the decades.

But the movie that won it such acclaim? It was left to disintegrate.

Like many other films of that era, the nitrate stock decomposed.

Paramount's chief archivist Andrea Kalas said the studio scoured the world for the best remaining copy of the film . . . and found it deep in their own vault, a forgotten backup print made in the 1950s.

"We really actually did look everywhere to find the best possible material, and turns out it was here in our vault the whole time," Kalas said.

The film was digitally restored, down to the groundbreaking orange special effect flames.

When the sound era started, the studio sent out a record with music and basic sound effects that could be played in the theatre. None survived.

So for sound effects they reached out to sound designer Ben Burtt. If his name is not familiar, we all know the sounds he created: the hum of a light saber, Darth Vader's breathing.

So good was Wellman's film that the people who made 1986's "Top Gun" studied Wellman's dogfight scenes.

But Tom Cruise did none of HIS flying.

Indeed, no studio today would dare what Wellman did in 1927: Risk the lives of his actors by making them both act and fly to give movie-goers the thrill - and terror - of combat flying.

Wellman believed then there was no other way to make the movie, and that is why we can say of "Wings" now . . . there is no other like it.