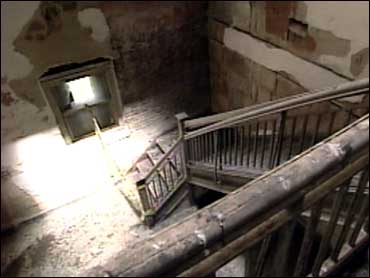 The Statue of Liberty appears like a recurring thought — suddenly, unexpectedly, the embodiment of the American dream — so tantalizingly close, and yet so far away for those who were confined here.

She beckons the tired, the poor, the huddled masses of the world, and for more than 60 years beginning in 1892, they spilled onto the docks at Ellis Island, 12 million of them altogether. Once in 1907, more than 11,000 arrived in one day.

The immigrants climbed the steep stairs into the great hall. Doctors examined them and then decided who was free to go and who was sent to the south side of the island to the hospital, to be held for treatment and possible deportation. Today it is off-limits to the public.

To protect the nation from illnesses that immigrants arrived with, the Ellis Island hospital had what was considered one of the best infectious disease facilities in the world. Sick children found themselves separated from their parents.

The staff were ordered to treat immigrants with kindness and they did, but anti-immigrant feeling was strong, and the fear of deportation was real.

"Eugenics was a hard science at the turn of the century, and a lot of people, members of Congress believed in eugenics that held that the American gene pool was being poisoned and polluted by the immigrant stock that was interbreeding and intermarrying in America at that time," Conway said.

Ellis Island finally closed in 1954. The immigrant processing center was restored and is now a museum. But not the "dark side," as the hospital complex came to be known.

In 1998, photographer Stephen Wilkes was asked to walk the grounds and spent an hour documenting what 50 years of neglect had done to the 22 hospital buildings. He took one look and then spent five years coming back again and again in different seasons, to capture the spooky beauty of the place before it was cleared and the buildings stabilized in hopes that it, too, one day would be restored.

"This is corridor number nine, and this is really the spinal cord of the hospital," he said. "I remember the first time I stepped in and walked and look at it — my mouth was agape. And when I got this photograph back and I thought, 'My goodness, it's all light on the right side and yet in terms of plant life everything is dead.' And then I looked at the left side of the photograph, and it was in complete shadow, yet everything was alive and thriving. And then I look down that hallway and saw this glow of white light, I thought, 'This is like a metaphor to what really happened on this island.' I mean, it's about life, it's about death. It's about going on a journey and maybe going to some other place."

If there is one iconic shot that says it all, it is Wilkes' photo taken in a TB ward.

"At this height there's a perfect reflection of the Statue of Liberty. I had this image of this Eastern European woman who literally was 5"2', and she'd raise out of her bed every morning and she would stand up and that's what she would look at — that's really as close as she ever got to her dream," Wilkes said. "I came back a couple weeks later and the mirror had dropped through the frame — the frame was still hanging there, but the mirror had dropped through, it was shattered into a million pieces, so the picture's gone."

But for every sad story that ended badly in the hospital, there were hundreds that ended happily, like Reuben Barrett's.

Born Reuben Boretsky, he was 4 when he arrived at Ellis Island from Poland with his mother, two brothers and sister. In 1929 his father was already in the United States.

He remembers climbing the stairs into the great hall and seeing men in uniforms.

"You have to understand the immigrant, especially those from Poland or Russia, the uniform was a frightening thing to them," Barrett said.

He remembers waiting to be processed.

"I was a little boy and I'd run around a sea of people," he said. "There was a babble of languages. Each table had an interpreter."

The family worried that Herman, Barrett's brother wouldn't be allowed into the United States, because he was deaf, but it was Reuben who caught the doctor's attention.

"He examined and he found there's a ringworm, right here, in my head and he said to my mother that we have to take your son to the hospital," he said.

Barrett is one of its last living patients. When we asked him to come back, it had been 78 years since he had seen the ward where he spent six weeks.

"The nurses and the aides taught me English. When I left here, after six weeks, I spoke English fluently," he said. "I didn't know every word, but I spoke without an accent. I don't recall any of the treatments they gave me. I don't recall if they hurt me or not, but I do recall being happy and enjoying myself in this hospital.

"I'm really glad I came [back]. It makes me feel as if I'm going through it all over again."

What he saw was not a ruin with a dark past. Barrett saw what he remembered: A small boy who'd come a long way to live the promise of that elusive lady, just there, through the window.

This week on "Sunday Morning" (July 3)
Thanks for reading CBS NEWS.
Create your free account or log in
for more features.
View CBS News In
CBS News App Open
Chrome Safari Continue
Be the first to know
Get browser notifications for breaking news, live events, and exclusive reporting.