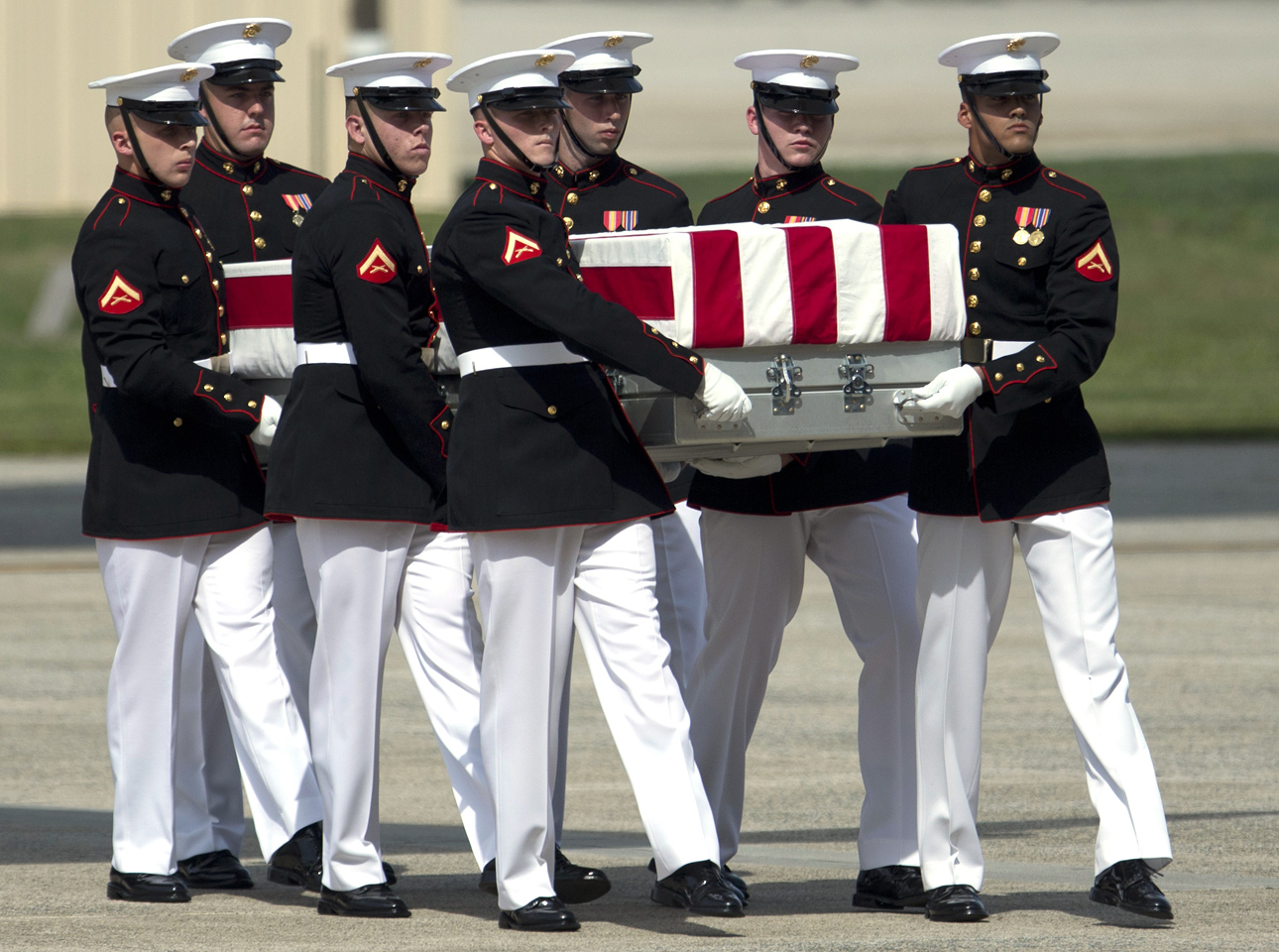 (CBS/AP) ANDREWS AIR FORCE BASE, Md. - President Obama on Friday honored the four Americans killed in an attack on the U.S. consulate in Libya, recalling their lives in deeply personal terms and declaring the United States will never pull back on its principles or "retreat from the world."

"Their sacrifice will never be forgotten," Mr. Obama said as four flag-draped cases rested near him. He had come to witness the return of those slain in the assault on the American diplomatic mission, including the U.S. ambassador, Christopher Stevens.

In the heat of a presidential election year, the scene was a gripping reminder of the danger facing Americans in diplomatic and military service every day, and of the turmoil in an incendiary region of the world that continues to test Mr. Obama's leadership.

Always in the background, campaign politics gave way to a sense of sheer loss. Secretary of State Hillary Rodham Clinton's voice broke as she spoke before the president.

"Today we honor four Americans who gave their lives for our country and our values," Clinton said.

CBS News correspondent Margaret Brennan reports Clinton's attendance was a very personal mission for the secretary because she's said she sent Stevens to Libya and knew it was a risky assignment. Clinton appeared to be fighting tears as she listened to the president.

"They knew the danger, and they accepted it," Mr. Obama said. "They didn't simply embrace the American ideal. They lived it."

In addition to Stevens, the ceremony also honored three other Americans killed in Benghazi — Sean Smith, an Air Force veteran who worked as an information management specialist for the State Department; Glen A. Doherty, a former Navy SEAL who worked for a private security firm and was protecting the consulate in Benghazi; and Tyrone S. Woods, also a former Navy SEAL who had served protective duty in various U.S. posts.

Said Mr. Obama of all four men: "They embodied it: the courage, the hope and yes the idealism, that fundamental belief that we can leave this world a little bit better than before. That's who they were, and that's who we are. If we want to truly honor their memory, that's who we must always be."

The transfer of remains came three days after an attack on the consulate, one of a series of assaults on U.S. outposts in Muslim countries that U.S. officials blame on an anti-Muslim video made in the United States.

Clinton said the rage and violence aimed at American missions was prompted by "an awful Internet video that we had nothing to do with." Amid the somber ceremony, anti-American protests raged across the Middle East and North Africa over the video. U.S. officials are investigating whether the assault in Benghazi was a coordinated terrorist attack that took advantage of just such a protest.

According to U.S. officials, the assault is looking less like a premeditated or pre-planned attack and more like one which took advantage of the demonstration outside the consulate, CBS News national security correspondent David Martin reports. It is still described as well-executed and well-armed. A radical Islamic group called Ansar al Sharia is still the leading suspect.

Two Navy ships off the coast of Libya armed with cruise missiles have not been given any mission for now other than to hold station and should not be taken as a sign that military action is imminent, Martin reports.

The president met privately with family members of the fallen before stepping into a cavernous hangar at this base he knows well, home to Air Force One. Emerging from a C-17 cargo plane, six Marines each carried the cases on top of stands before four waiting hearses, as a color guard led the somber procession.

Clinton and Mr. Obama both spoke of how the four men lived their lives — and how their mission would go on.

"This work, and the men and women who risk their lives to do it, are at the heart of what makes America great and good," Clinton said. "So we will wipe away our tears, stiffen our spines, and face the future undaunted."

Said Mr. Obama: "The United States of America will never retreat from the world. We will never stop working for the dignity and freedom that every person deserves."

The return of the remains comes as many questions remain unanswered about the attack. The State Department still isn't clear what happened to Stevens for a five-hour period after the attack, leaving diplomats at the time wondering whether he had gone into hiding or had been kidnapped, Brennan reports. They don't know how his body ended up in a Benghazi hospital or who took it there.

Broadly, the attack draws into question one of the success stories of the Obama administration on the foreign policy front, Brennan reports. Libya was viewed as a test of a strategy to achieve maximum impact through minimum military engagement.