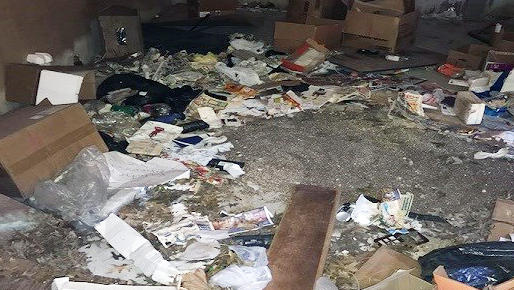 ST. LOUIS -- Police in Illinois believe the remains of a child found in the garage of a vacant home had been there four years and are investigating the death as a homicide.

Officers found the remains Tuesday morning after a woman in Las Vegas contacted police and told officers her husband had killed their then-6-year-old daughter in Illinois years earlier and hid the body in the garage of a home in Centreville, near St. Louis. She also said her husband, identified by police as Jason Quate, 34, forced her into sex trafficking over the past two years and had abused two other children.

Las Vegas police shared the tip with Centreville police, who found the small body inside the detached garage behind a dilapidated and vacant home in the impoverished town of about 6,000 residents.

Authorities suspect the child was killed in nearby Belleville in 2013 and taken to the Centreville garage. An autopsy is expected later this week, Dye said.

The girl's mother contacted police from a woman's shelter, where she said she had gone to seek refuge from her husband. She said Quate killed the child during a "physical altercation," Las Vegas police Lt. Raymond Spencer said in a video statement.

Spencer said officers were told the woman's remaining children, who are in their early teens, were never allowed outside, even to attend school. He described them as pale and lacking socialization skills, and said officers observed signs of abuse. Both children were taken into protective custody.

"It was very disturbing when you saw the children," Spencer said.

Belleville detectives were sent to Las Vegas to work on the case, while others focused Wednesday on a Belleville home, Master Sgt. Todd Keilbach said Wednesday. Real estate records obtained by the Associated Press show Quate lived in the Belleville home that was being examined.

There are no records indicating that Quate ever lived at the home in Centreville.

Quate is jailed in Las Vegas. Clark County District Attorney Steve Wolfson said he expected to file charges of felony sex trafficking and living off the earnings of a prostitute Wednesday against Quate.

Wolfson said the woman also is under investigation.

"We're looking at the behavior of both of them for potential criminal charges," Wolfson said.

Any charges related to the girl's death would be filed in Illinois. St. Clair County State's Attorney Brendan Kelly said the investigation was still ongoing and declined further comment.

Court records show that a man with the same name and birth date as Quate was convicted of three crimes in Belleville. He was sentenced to probation for two residential burglaries in July 2000 and was convicted of misdemeanor retail theft in May 2000.

Neighbors told the Belleville News-Democrat that the small house in Centreville with boarded-up windows has been vacant for more than two years.

Property records show the home was last sold for $25,500 in 2005. The man listed as its owner, Marcus Acoff, declined comment when reached by the AP, saying he did not want to interfere in the investigation.