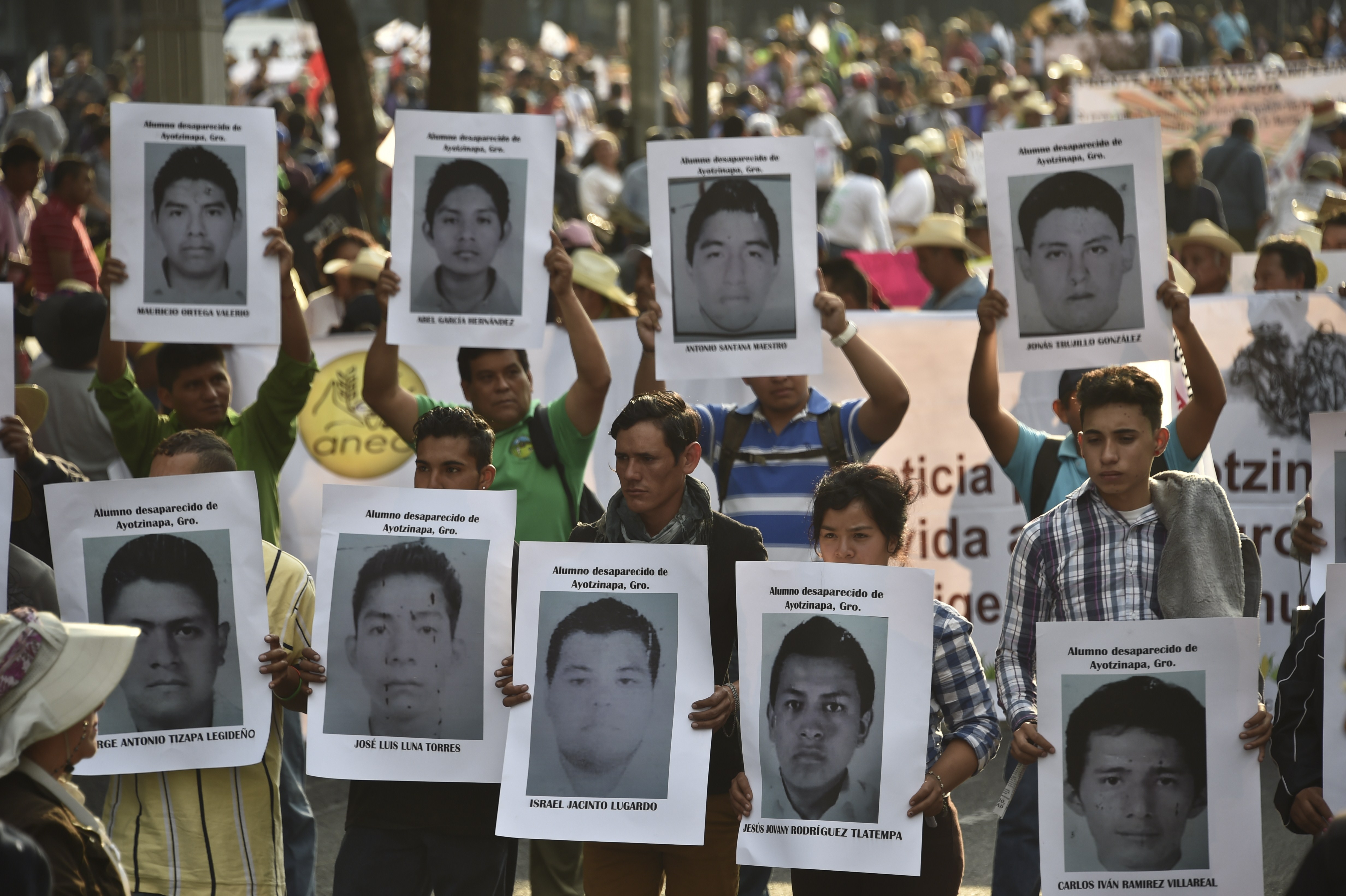 MEXICO CITY -- At least one of 43 college students missing since September has been identified among charred remains found several weeks ago near a southern Mexico garbage dump, two government officials confirmed Saturday.

The two could not provide more details on how many of the students might have been identified. They agreed to speak about the development only if granted anonymity because they were not authorized to speak to the press.

A family member of a missing student told The Associated Press that the remains were of Alexander Mora. The families were given that information late Friday by an Argentine team of forensic experts working on behalf of the relatives and with the Attorney General's Office, said the man, who also would speak only on condition of anonymity.

Parents of the students declined comment, addressing a crowd that gathered Saturday afternoon at an already planned protest at the capital's Monument to the Revolution to demand the return of the students alive.

Omar Garcia, a student at the march who attended the same rural teachers college in Ayotzinapa as the missing young men, relayed the reaction of Mora's father when he learned the fate of his son: "He will never give up. He will never get over his pain, but what he wants to tell all of you, and what we all want to say is this: We want justice!"

The students went missing Sept. 26 after confrontations with police in the Guerrero state city of Iguala that killed three students and three bystanders. Attorney General Jesus Murillo Karam has said they were attacked by police on orders of Iguala's then mayor, Jose Luis Abarca, who has since been detained after going into hiding. Authorities are holding more than 70 people in the case, which also forced the governor of Guerrero to resign.

Prosecutors say the students were later turned over to a drug gang, which killed them. In announcing the finding of the remains, the attorney general said Nov. 7 that some detainees had told officials that they burned the 43 bodies at a dump site and bagged and threw their ashes in a river.

The attorney general told the parents that the bone fragments left after the burning would be almost impossible to identify, leaving many relatives doubting the government's story. They had kept up the search for their sons, maintaining hope that they were still alive.

Parents participating in Saturday's protest got off buses with sullen faces and were immediately surrounded by people for protection and support.

The bone fragments were sent to the University of Innsbruck in Austria, which was recommended by the Argentine forensic team as having one of the most experienced laboratories for identifying deteriorated remains. The identification came from Austria, said student David Flores, who was at the protest. The Argentine forensic experts couldn't be reached Saturday.

Mora's classmates at the teachers college had dubbed the teen farmer "The Rock," Garcia said.

"He was a classmate who was very strong, very persevering in whatever he had as a goal," Garcias said. "It's a big loss."

Mora's parents received the news Friday night, and members of the school community were with them in their hometown of El Pericon on Saturday. Garcia said they received the news "with a lot of courage, valor, dignity and determination."

The case has ignited citizen indignation across Mexico and abroad for the fact that the students disappeared at the hands of a corrupt local government and that federal authorities took 10 days to intervene.

Tens of thousands have taken to the streets, some calling for President Enrique Pena Nieto to resign. The case has come to signify the abuse of authority and corruption that is engrained in the Mexican system and that all Mexicans experience on a regular basis.

Marching to the protest site Saturday, thousands of people filled streets in central Mexico City shouting, "Justice," ''We want them alive," and "Pena out."

"The parents will not rest until we have justice," said Felipe de la Cruz, father of one of the missing students.

Noting that the identification is for just one of the 43 disappeared, he said, "If they think one confirmation will leave us simply to mourn, they're wrong."